The State Water Resources Control Board today announced that urban Californians’ monthly water conservation was 25.1 percent in February, more than double the 11.9 percent savings in February 2016, when state-mandated conservation targets were in place.

The cumulative statewide savings from June 2015 through February 2017 remains at 22.5 percent, compared with the same months in 2013.  Since June 2015, 2.6 million acre-feet of water has been saved – enough water to supply more than 13 million people – exceeding a third of the state’s population – for a year.

“Even with a banner year for winter precipitation, Californians have continued to practice sensible conservation, with a significant drop in water use in the South Coast," said State Water Board Chair Felicia Marcus. "Though our water picture is significantly improved in most of California, we have to maintain our drought memory and shift to planning and action to prepare for the long term.  From transitioning to California-friendly landscapes and smart irrigation systems, to reducing leaks and increasing use of recycled water and other measures – we need to keep in motion to face a future with longer and more severe droughts under climate change.” 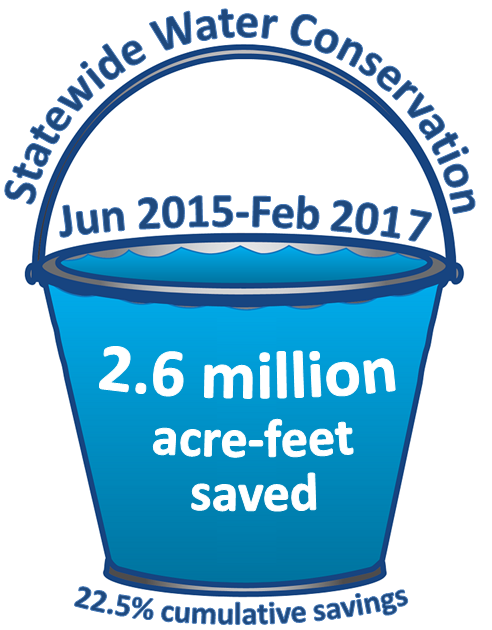 In November, the State Water Board and other state agencies released a draft plan for achieving long-term efficient water use and meeting drought preparedness goals that reflect California’s diverse climate, landscape, and demographic conditions.

The plan, “Making Water Conservation a California Way of Life,” includes making permanent the monthly reporting of water use from urban water suppliers. It also includes permanently prohibiting wasteful practices like hosing off sidewalks and driveways, excessively watering lawns or watering lawns during or within 48 hours after a rain event.

The plan’s fundamental premise is that efficient water use helps all of California better prepare for longer and more severe droughts caused by climate change. A final plan is expected to be released soon.

To learn about all the actions the state took to manage our water system and cope with the impacts of the drought, visit Drought.CA.Gov. To learn more about the state’s efforts to build long-term water sector resilience, visit the Governor’s Water Action Plan page.