Survivor of a car crash speaks out to make a difference 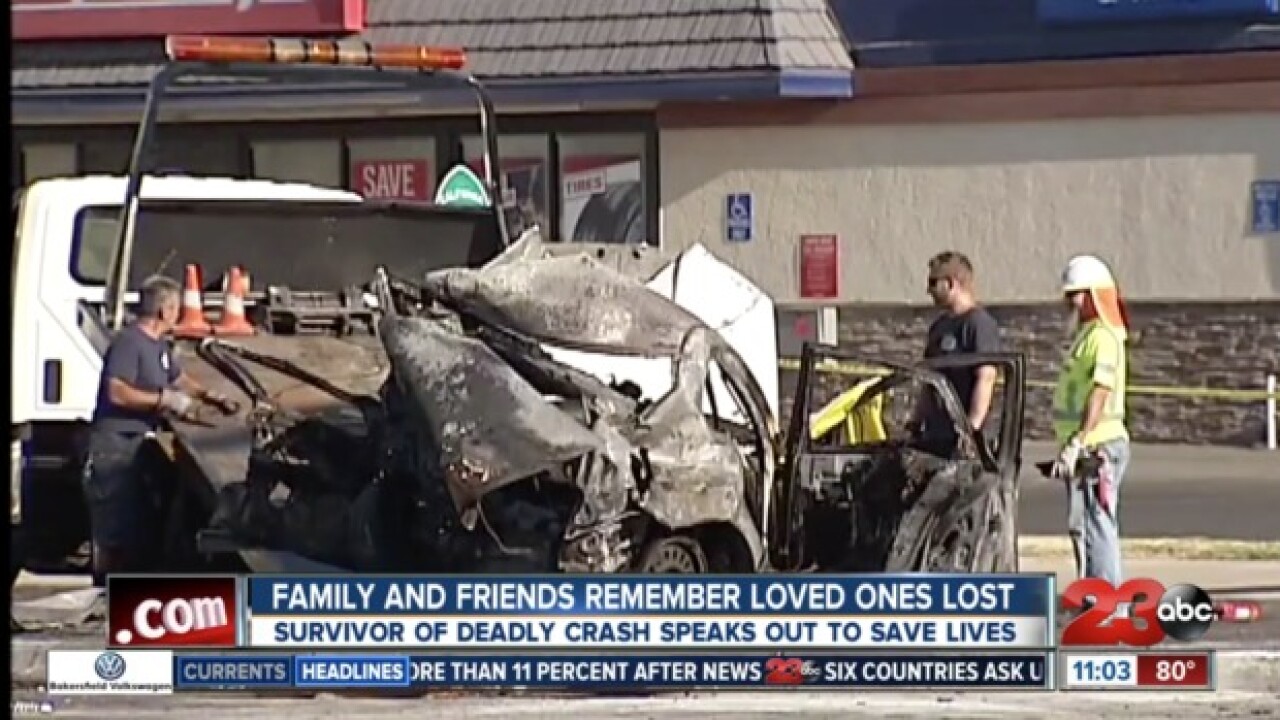 Four years ago on August 20, 2014, at the corner of Rosedale Highway and Verdugo Lane, a deadly crash took like the lives of two young women leaving one survivor Jessica Magee.

"We were on our way home from a Bakersfield Blaze game and going down Rosedale, we were hit behind from a drunk driver. He was going over 90 miles per hour, and he actually moved our car from the original impact to one and a half football fields, before the car stopped and exploded. We were trapped in the car while it was on fire," said Magee.

Magee was able to get out of the car, but Jaclyn Kvasnicka, 30, Claire Pavinder, 25 didn't make it. According to police, the driver, Dontrell Collins was on PCP and driving 90 miles per hour when he slammed into the back of the car. He is currently serving time and sentenced to 73 years.

"I think with time it gets easier to handle. The wounds will still be there, and it will still be in the back of my mind. And I still have the scars on my arms they are not going anywhere," said Magee who still struggles with the nightmares of that night.

"Their lives were taken so suddenly they didn’t have a say. I would think they would probably want to say, that they had a lot more to give in life. Jackie has a daughter, and she won't get to see her grow up, Pavinder didn’t get to finish college. They had a lot more to offer," said Magee.

Magee shares the love she has for her two best friends, "I have two guardian angels. Two more people who are there to make sure I am ok." Magee said every time she sees candy she thinks of Kvasnicka because she always had candy around, hot tamales being her favorite. Magee said she always admired Claire for her fashion styling and always wanted to go shopping with her.

Magee will be honoring her two best friends at this years "Walk Like M.A.D.D." event. This will also be the first year when all three families will be at the walk together.

"I originally got involved with M.A.D.D. because I saw that I wasn’t the only one that was affected by drinking and driving. There’s a lot of families, and if you ever go to the walk you will see, people holding up signs for their loved ones, and people embracing other people, because it isn’t just this one incident where drinking and driving. It affects a whole community when someone gets behind the wheel; it affects the people that they live with, their family, their friends, and their coworkers. I originally wanted to get involved with M.A.D.D. because I wanted to let people know they are not alone. If they are involved in a drunk driving car accident, someone will be there to help them," said Magee.

"I just wanted to make a difference, because I had no choice or say in the matter. I guess because it was someone else's decision. I guess being a part of M.A.D.D. is having that kind of choice be back in my hands and I'm able to help other people," said Magee.