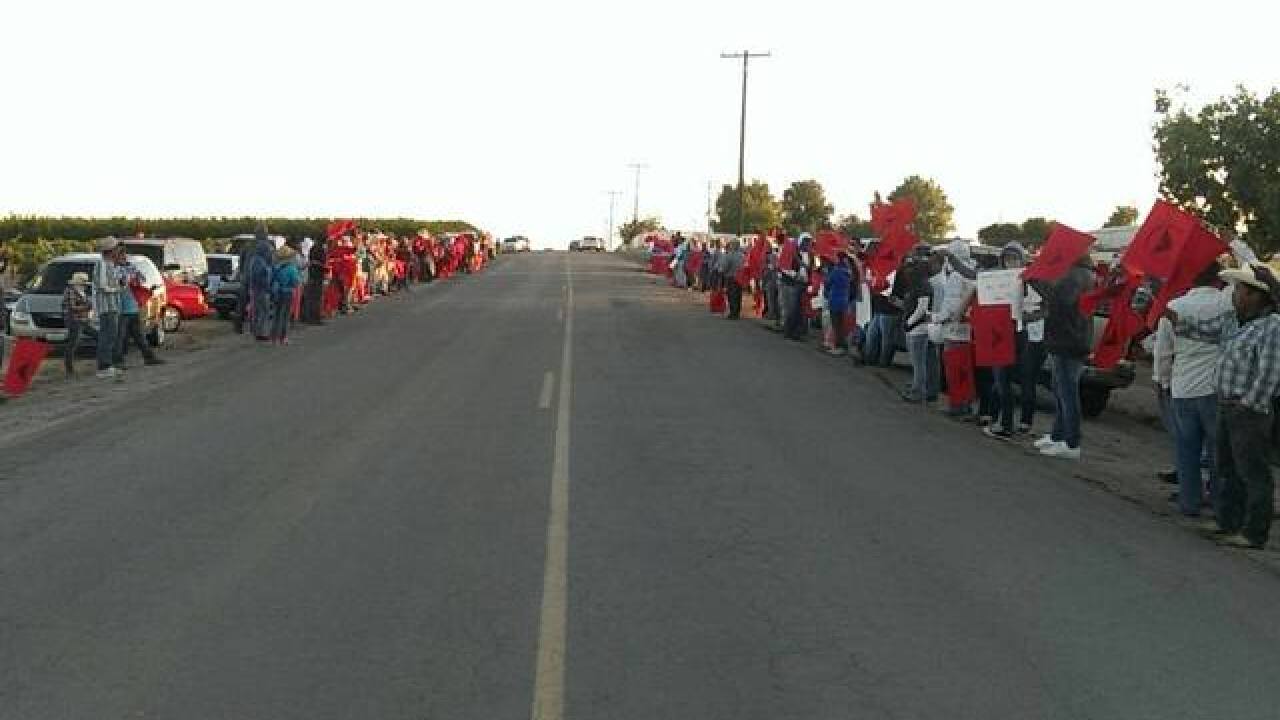 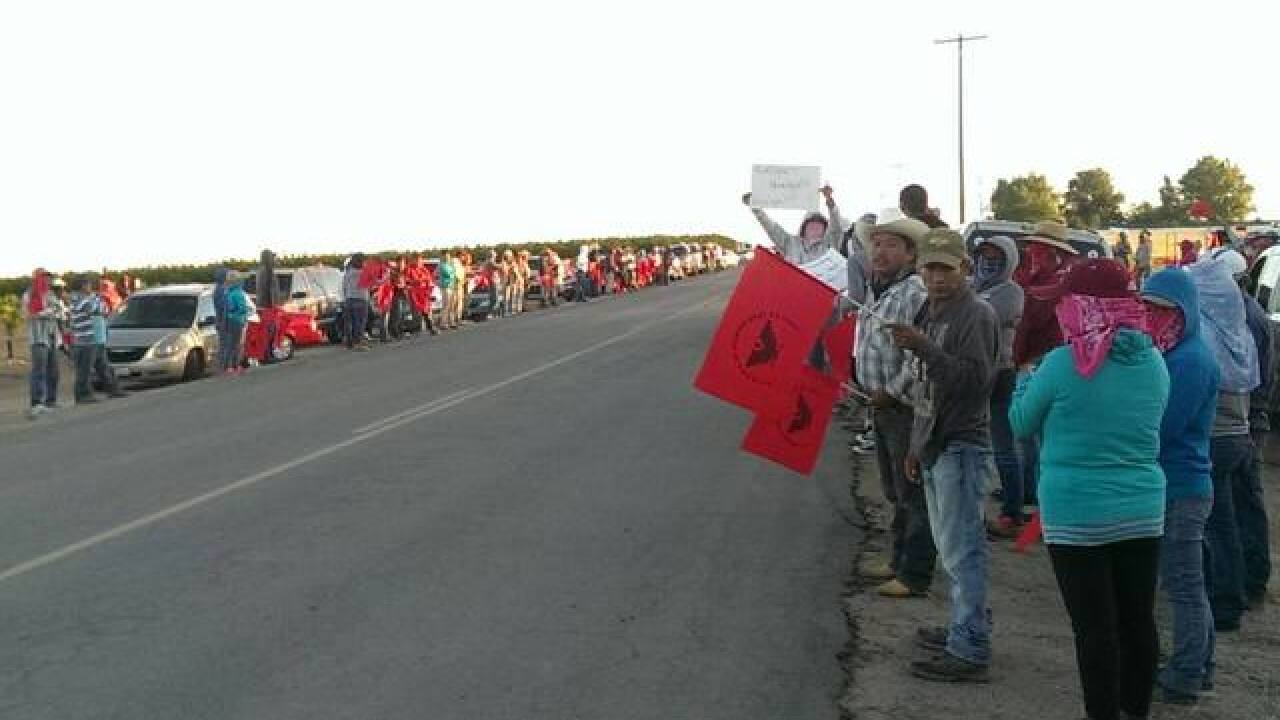 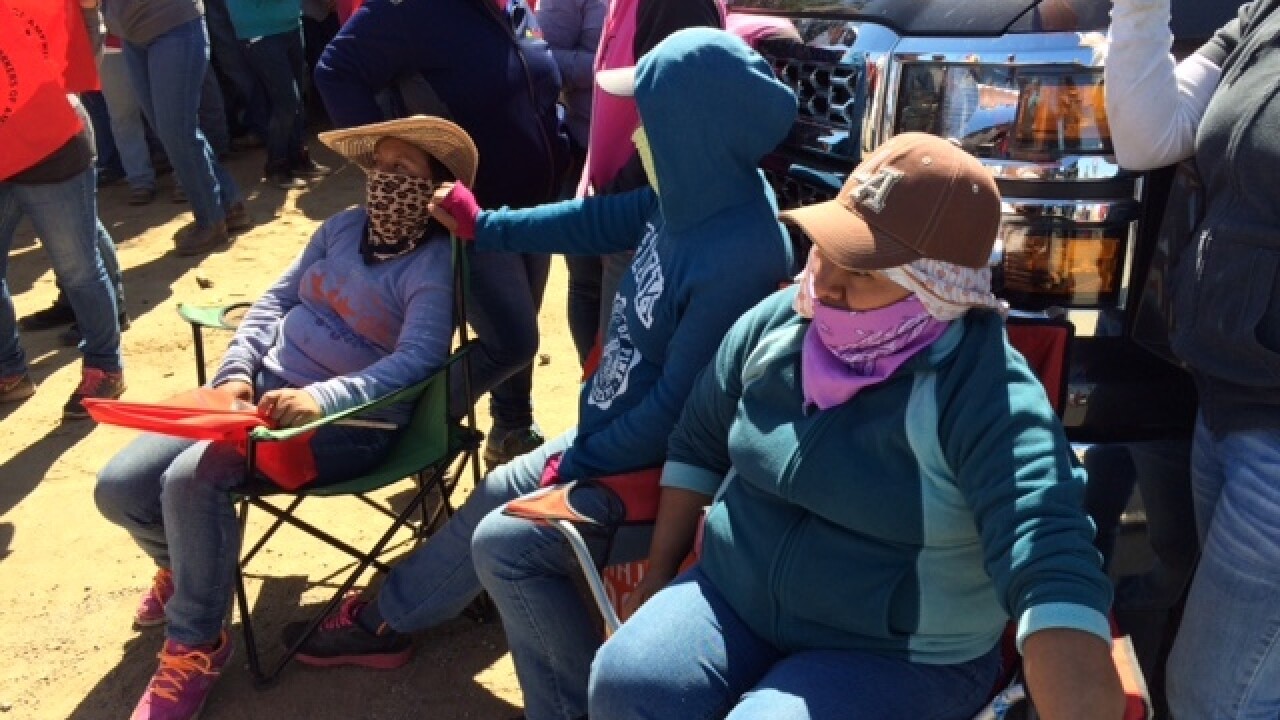 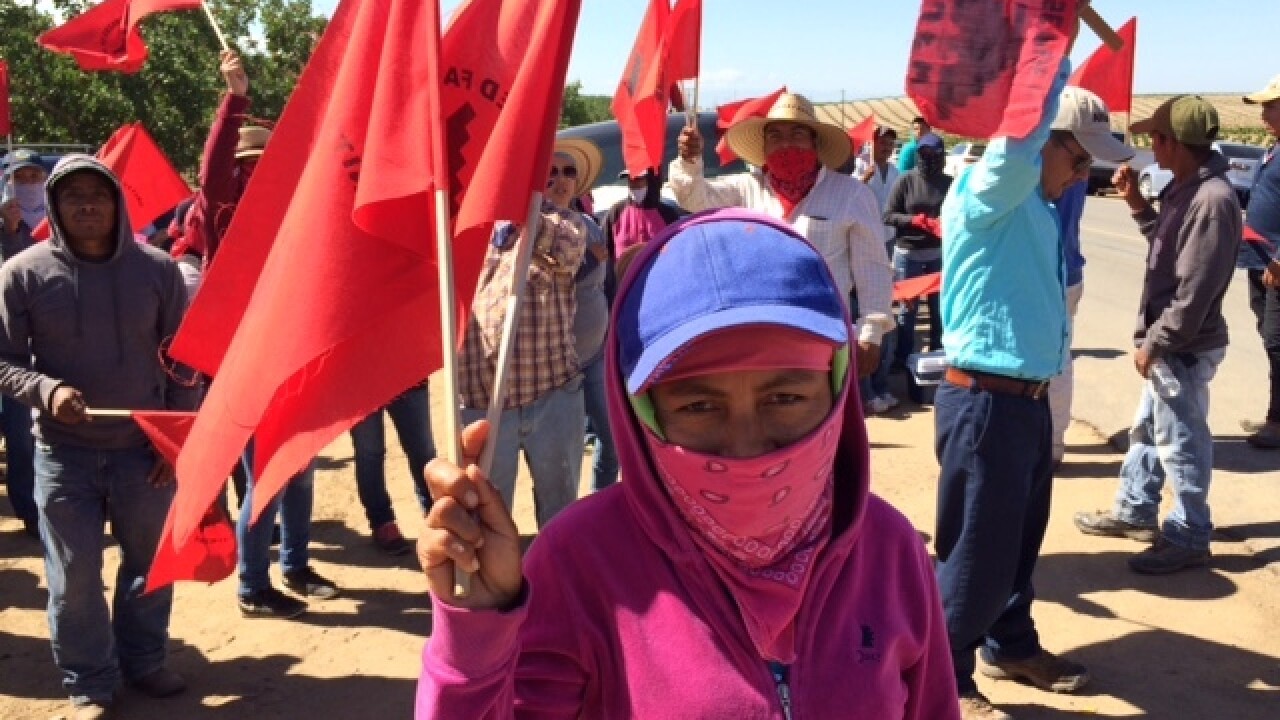 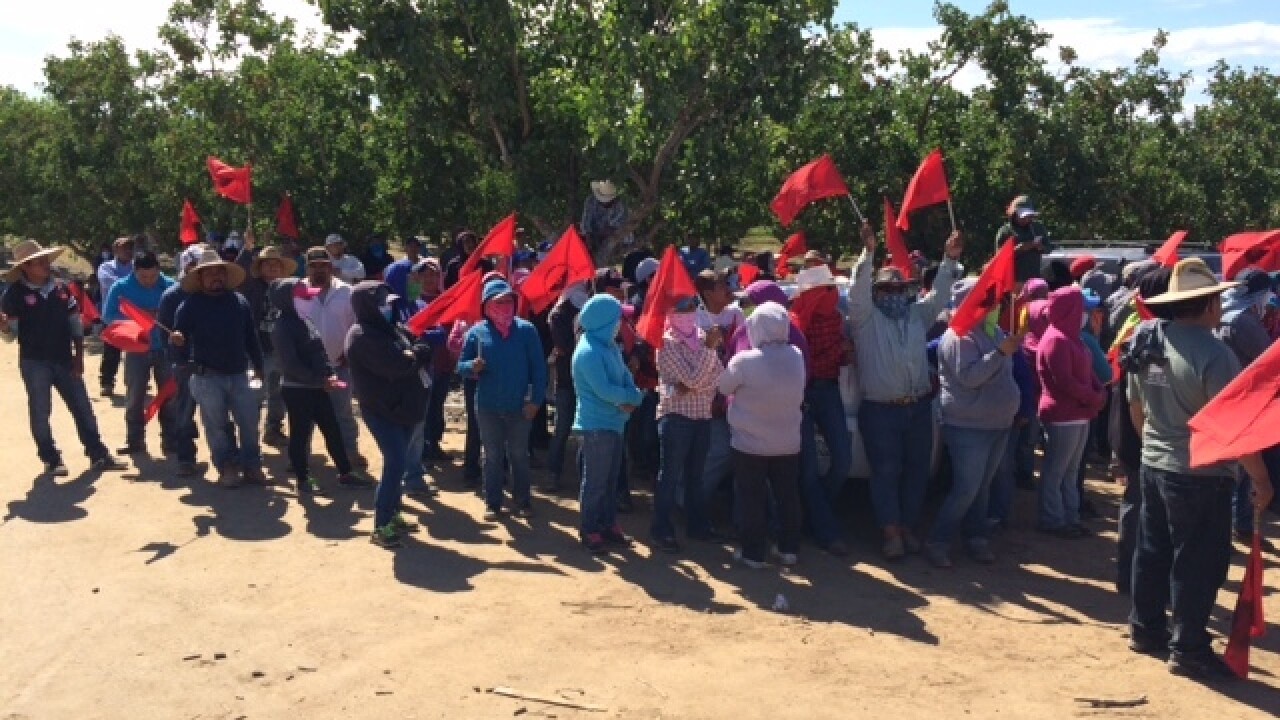 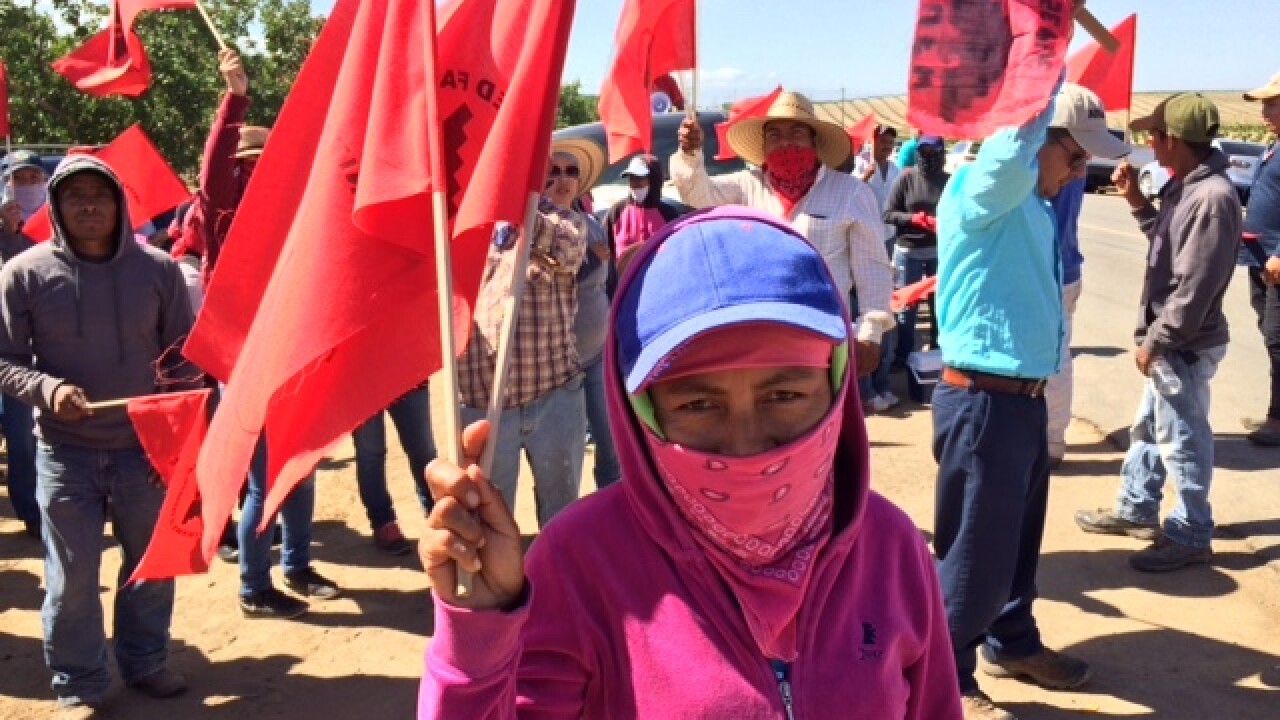 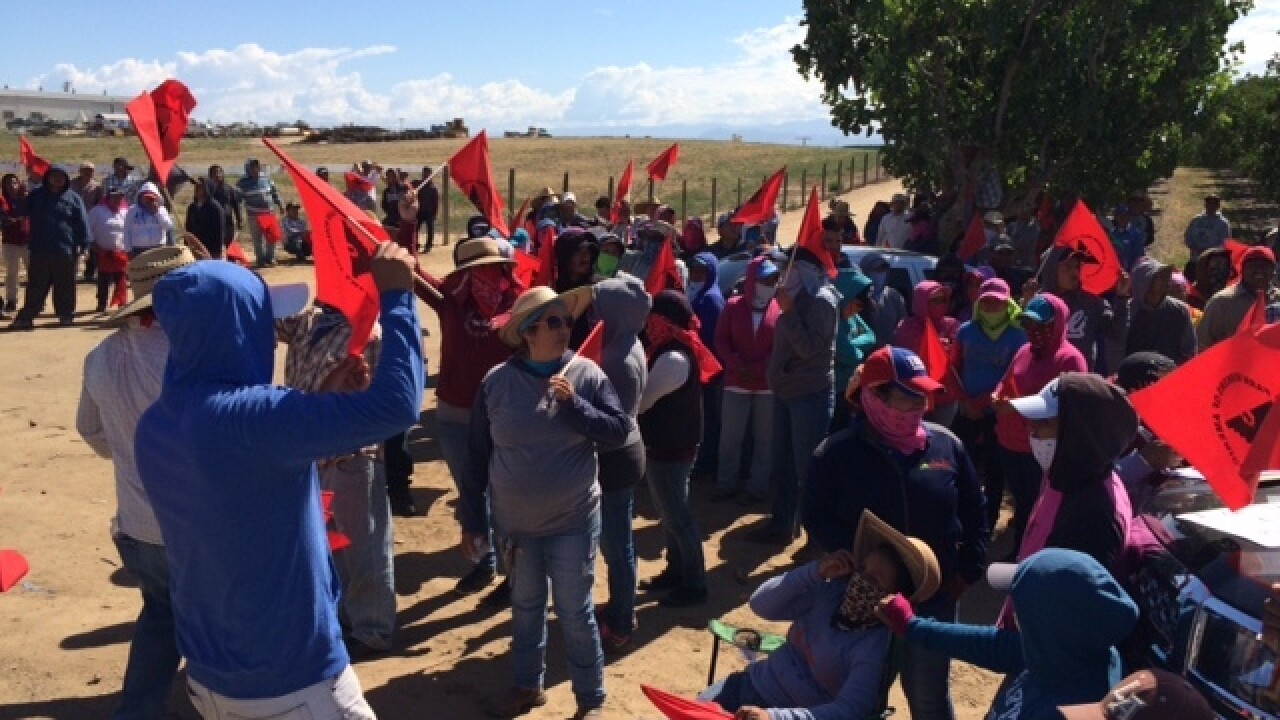 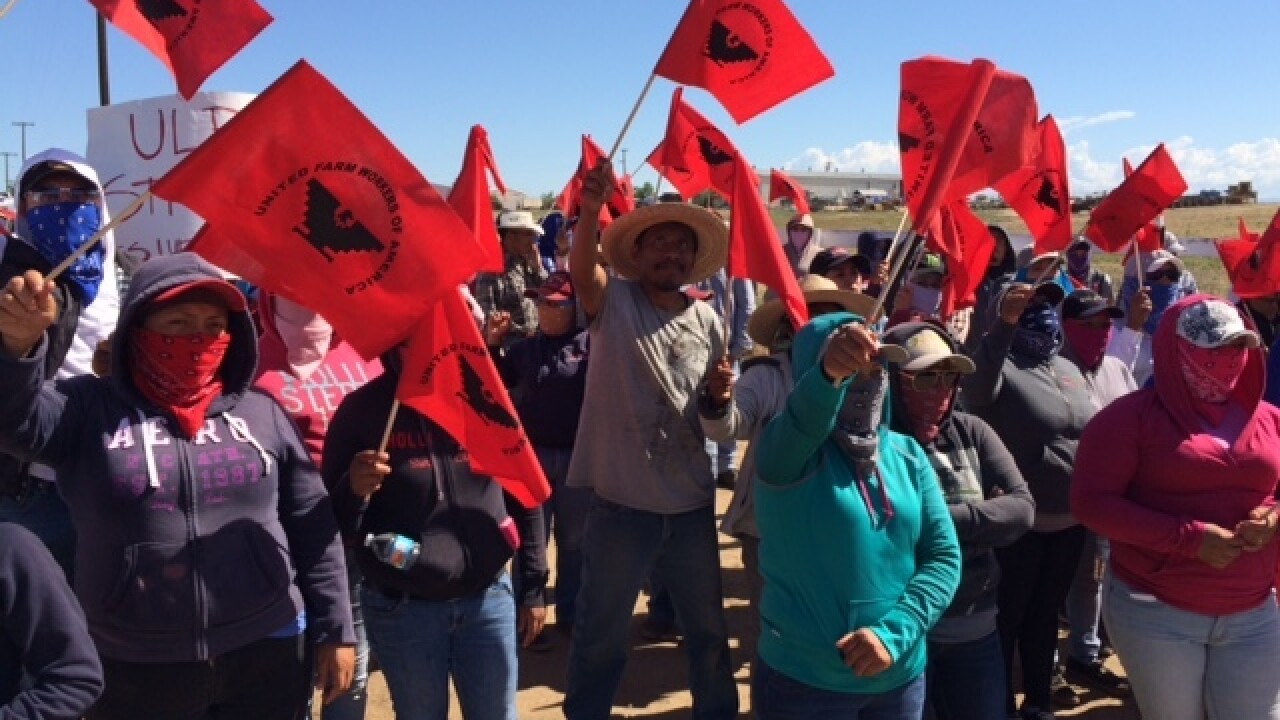 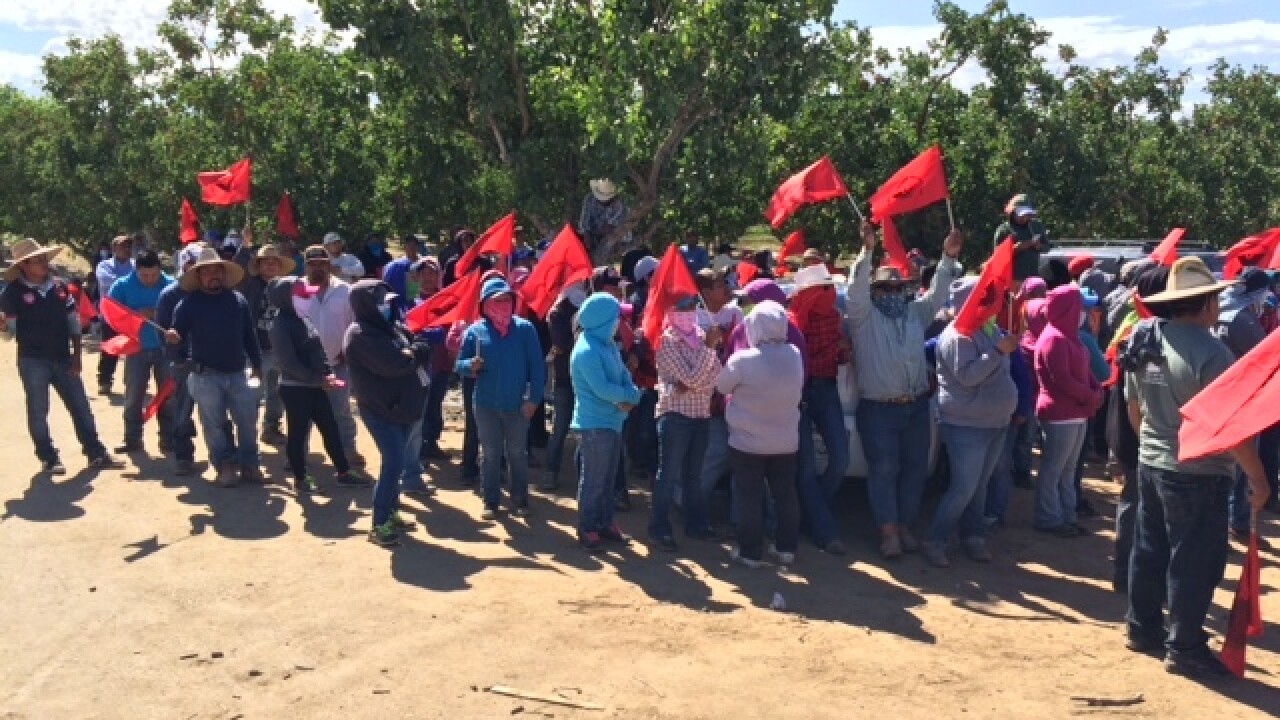 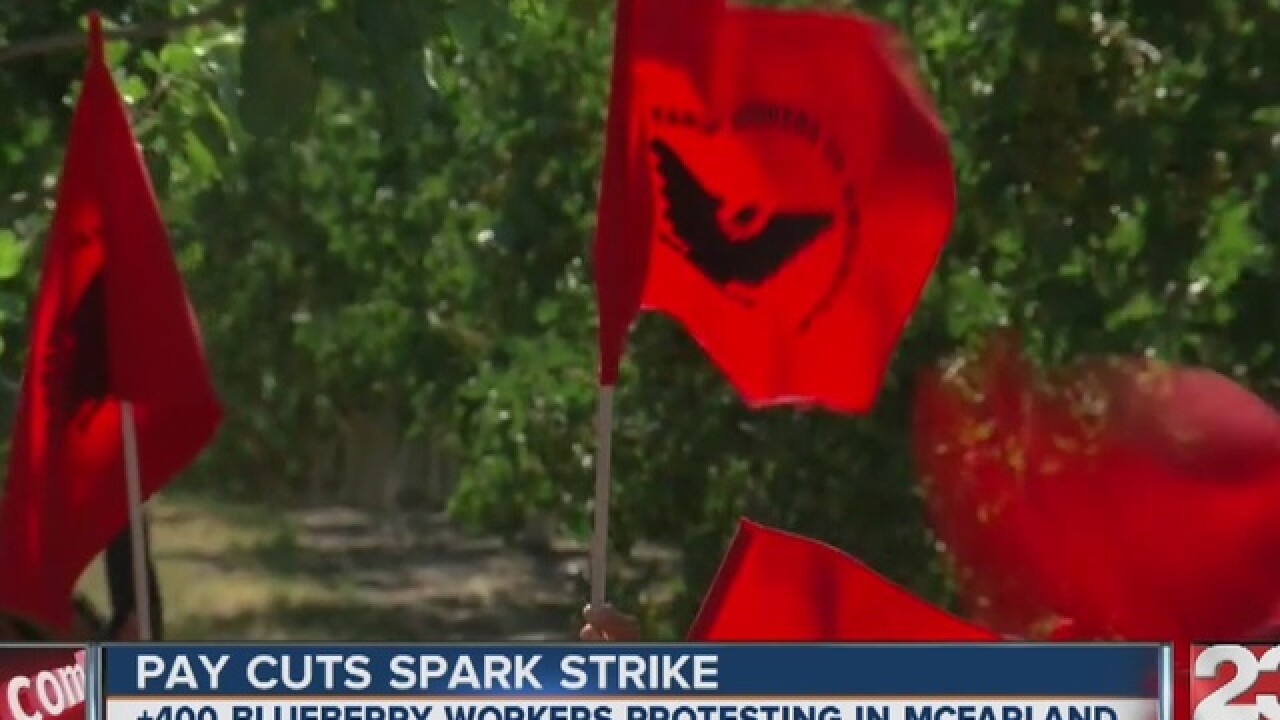 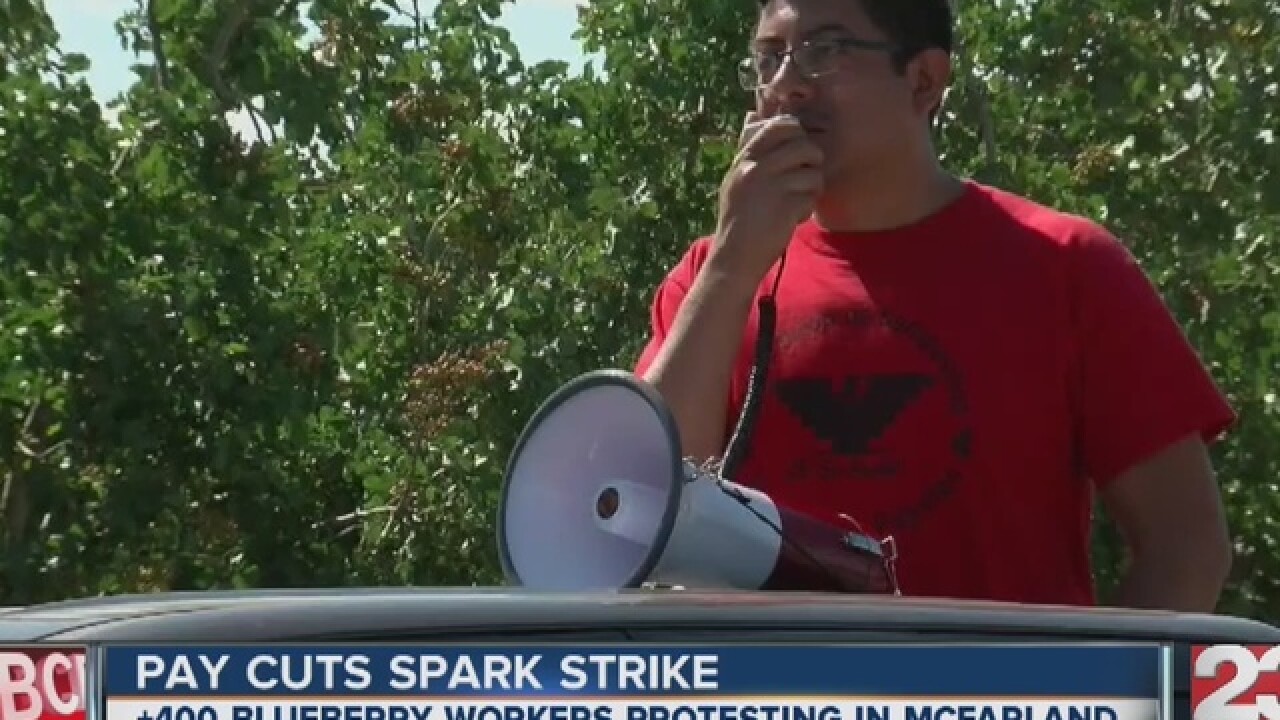 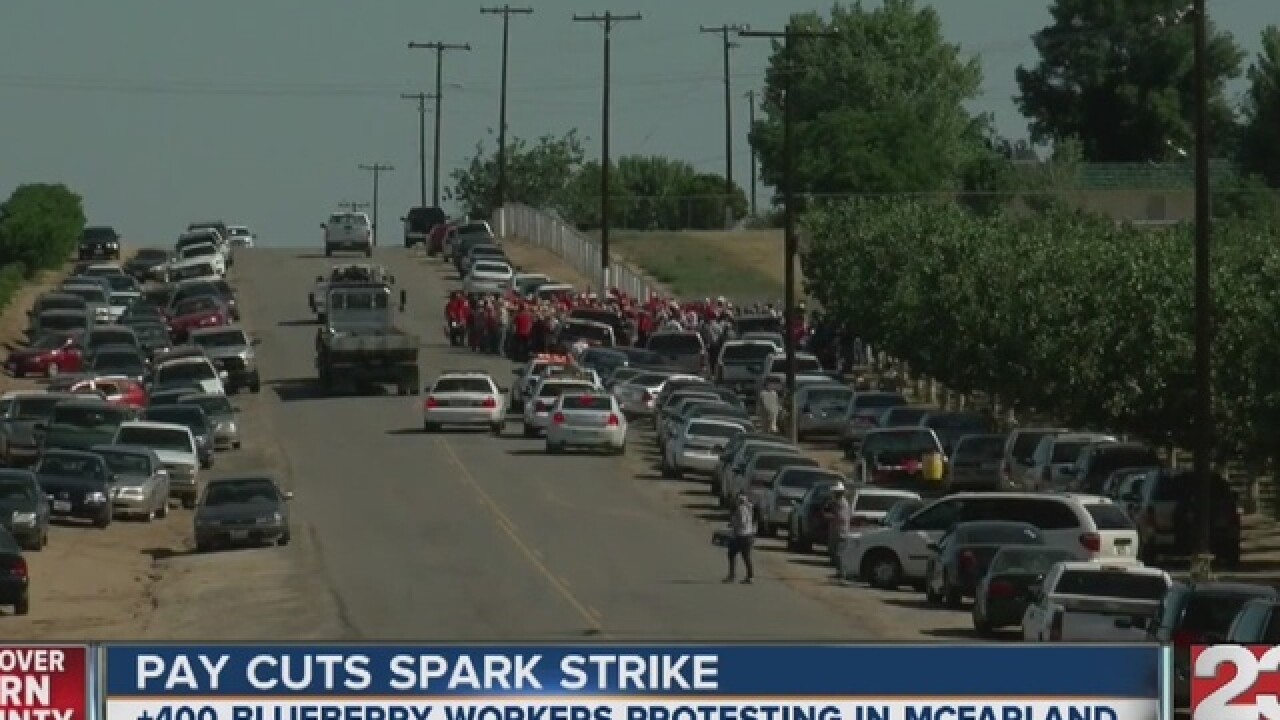 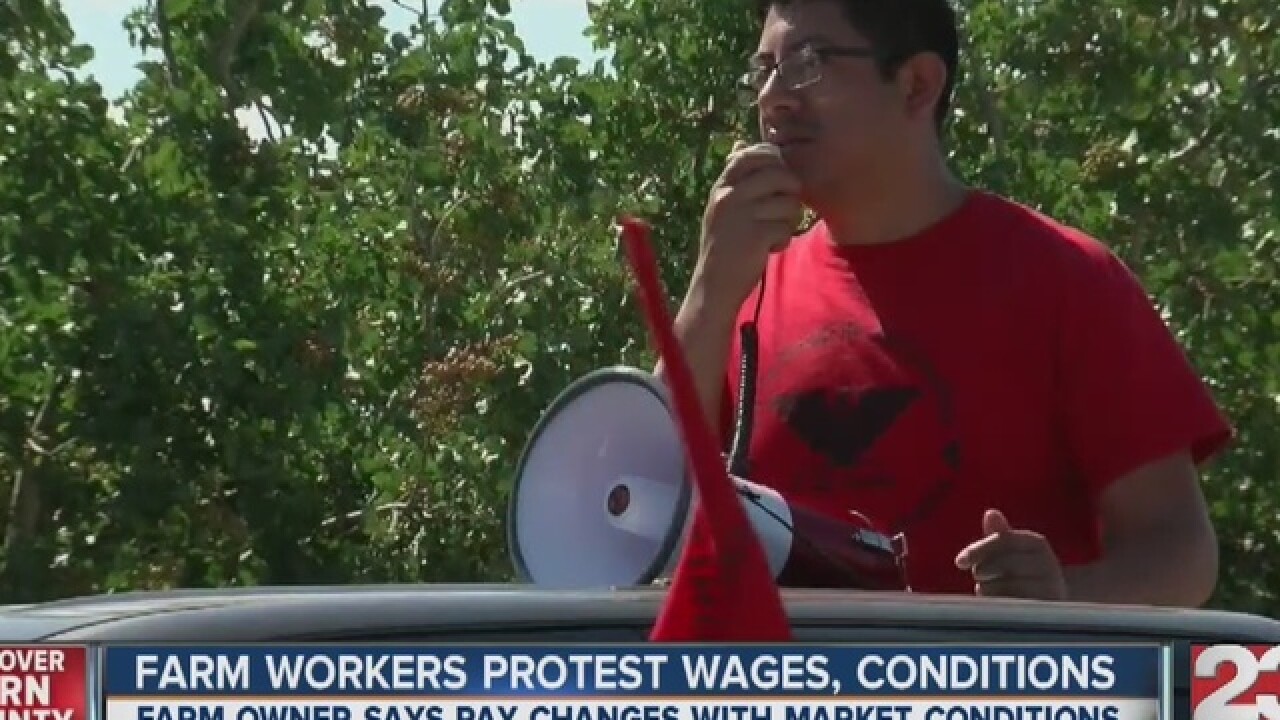 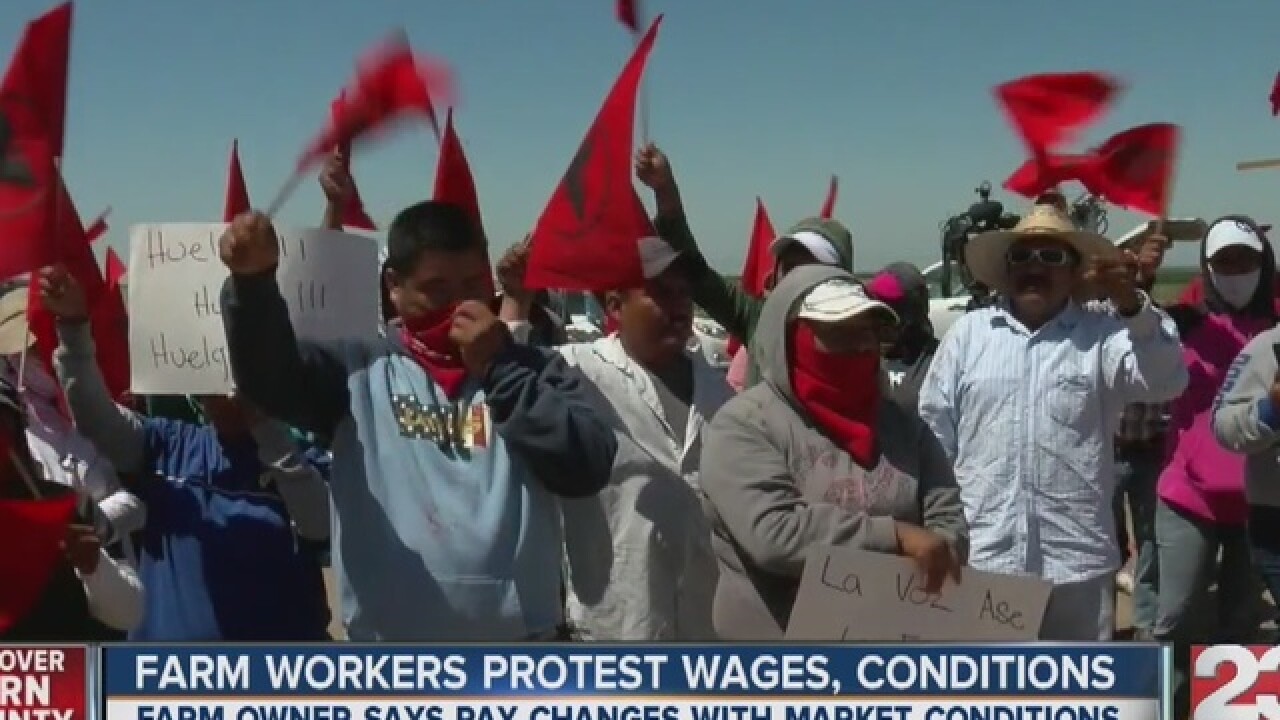 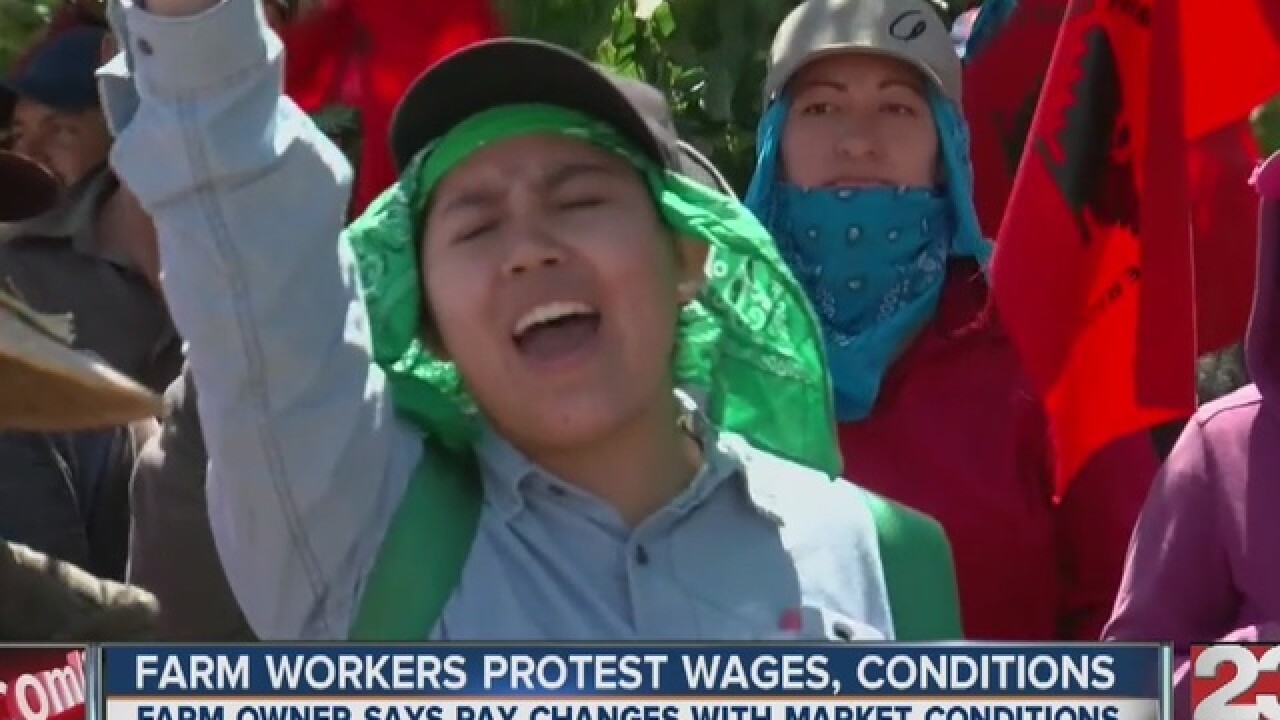 A protest by The United Farm Workers has taken over the 13800 block of Kyte Avenue.

The strike by more than 400 blueberry workers is underway in McFarland at a company called Klein management, sparked by pay cuts.

The workers claim they are paid low wages, they don't get paid for overtime, they have dirty bathrooms and face mistreatment from management among other issues.

"They're doing the right thing, they're getting together they're just telling the company owner to pay them good cost, to pay them better," said Nancy Oropeza, civic participation and policy for UFW.

The United Farm Workers were out with the workers to inform them of their rights. They say other workers should take notice of the change that is possible.

"They're going to continue to walk out until they have what they deserve and that's fair treatment, fair conditions and what ever else they've got to address," said Armando Elenes, National vice president for UFW.

The workers said on Monday their wages dropped. 23ABC reached out to the owner of the property, Leland Klein of Klein Management. He said he could not comment on specifics, but sent this statement.

"Klein Management, Inc. is a blueberry grower, who has been in operation in McFarland since 2003.  The Company prides itself on providing good, high paying jobs every season.

On Monday, May 16, 2016, the Company made an adjustment to the piece rate it pays its employees for each pound of blueberries the employees harvest.  Such an adjustment is common, and happens every season, based upon changing market conditions.  As the volume of blueberries getting to market increases, the price per pound drops.  The average worker, however, continues to earn in the range of $17.00 to $17.50 per hour under either piece rate because even though the piece rate drops, the volume to be harvested increases.  These are good paying jobs.  There are approximately three weeks left in this harvest season."

The UFW filed a petition today with the Agricultural Labor Relations Board (ALRB)-conducted election under the law's provisions allowing for speedy balloting if there are walkouts.

"They want to be represented and again they want to negotiate their issues, but not just their wages, but the working conditions," said Oropeza.

"Obviously that motivates workers to know that they recognize that somebody like the former president of the United States, for the first time in history, is coming to visit farm workers and be with farm workers and listen to their concerns, that's important," said Elenes.

Officials said they should know by Wednesday whether or not the petition will move forward.

Elenes said it would be up to the workers if they wanted to protest again on Wednesday.