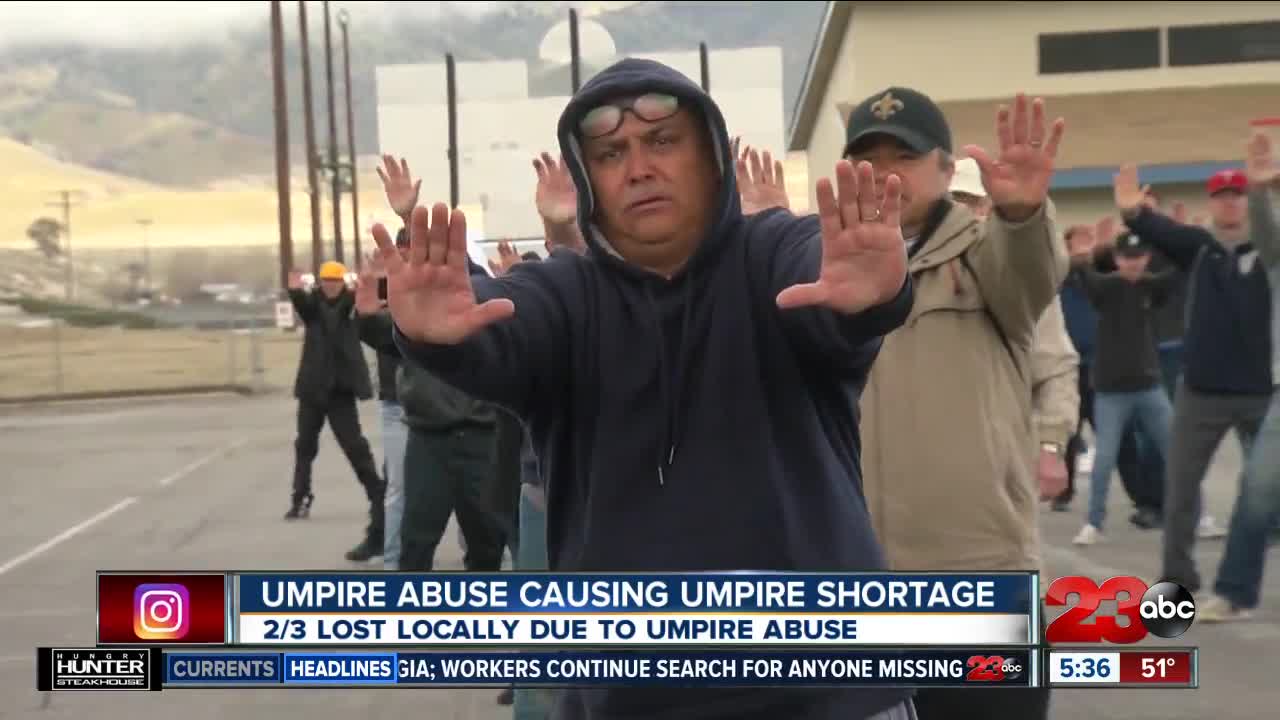 Local Little League officials say about 2/3s of their umpires have stopped due to umpire abuse.

TEHACHAPI, Calif. — Baseball and softball season is right around the corner. And before the ballplayers can play ball umpires are needed to call balls and strikes. However, umpires are getting harder to find.

Little League officials said their umpires are unpaid volunteers. And they preside over each game for the love of the game. However lately, there’s been a major problem interfering with umpires love of the game.

They have their own personalities, especially when it comes to calling balls and strikes.

For most umpires their duty behind the plate is a calling. Jeromy Smith he said he went from Little Leaguer to Little League umpire when he was 11. And he did so after watching his dad officiate the game they love.

14 years into his service to the game Smith said there’s one aspect that is getting noticeably worse, coaches, parents and other fans abuse towards umpires.

“We have to have thick skin, but I will admit it does get to me at times," said Smith. "I’ve definitely been on the receiving end of some unhappy coaches, unhappy fans. And we just have to rely on our training to tune it out, not let it get to you. But it is difficult. It’s probably the hardest thing that we do.”

Local umpire officials said abuse of umpires is a growing problem. So much so that Smith said in the last couple of years his yearly umpire training now includes how to deal with umpire abuse and unruly coaches and fans. And that abuse has driven off 2/3s of local little league umpires.

Rich Odermatt is the District 51 assistant district administrator and certified district umpire. He said, “Eight, ten years ago we used to have 30, 35 district certified umpires that were regularly doing games. We’re down to ten to twelve district umpires that go through certification training will work for any league that work regularly. Just nobody wants to do it as much anymore.”

The first weekend in March Tehachapi trained new volunteer umpires. Along with teaching proper mechanics from balls and strikes, to safe and out, they taught them how to deal with umpire abuse. For a new umpire like Andrew Branch, he hopes people yelling at him doesn’t get in the way of his love of the game.

“I want to have kids have a good fair game so they can get what they want in the game," said Branch. "No, no bad calls. I just want to try to get everyone to have good fair games.”

Odermatt said he invites any fan or coach that yells at umpires to take the district training course with him. And reminds that it’s important to remember there’s a person behind the umpire’s mask and sometimes that person can be as young at eleven or twelve.