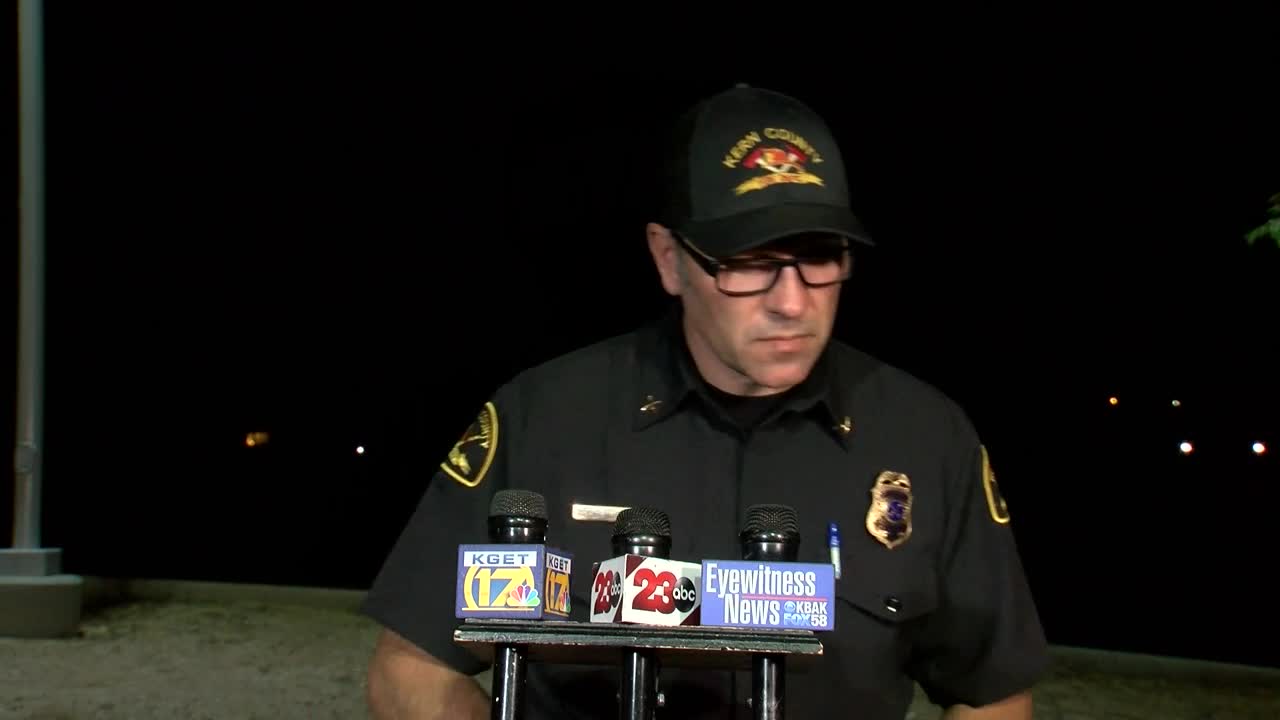 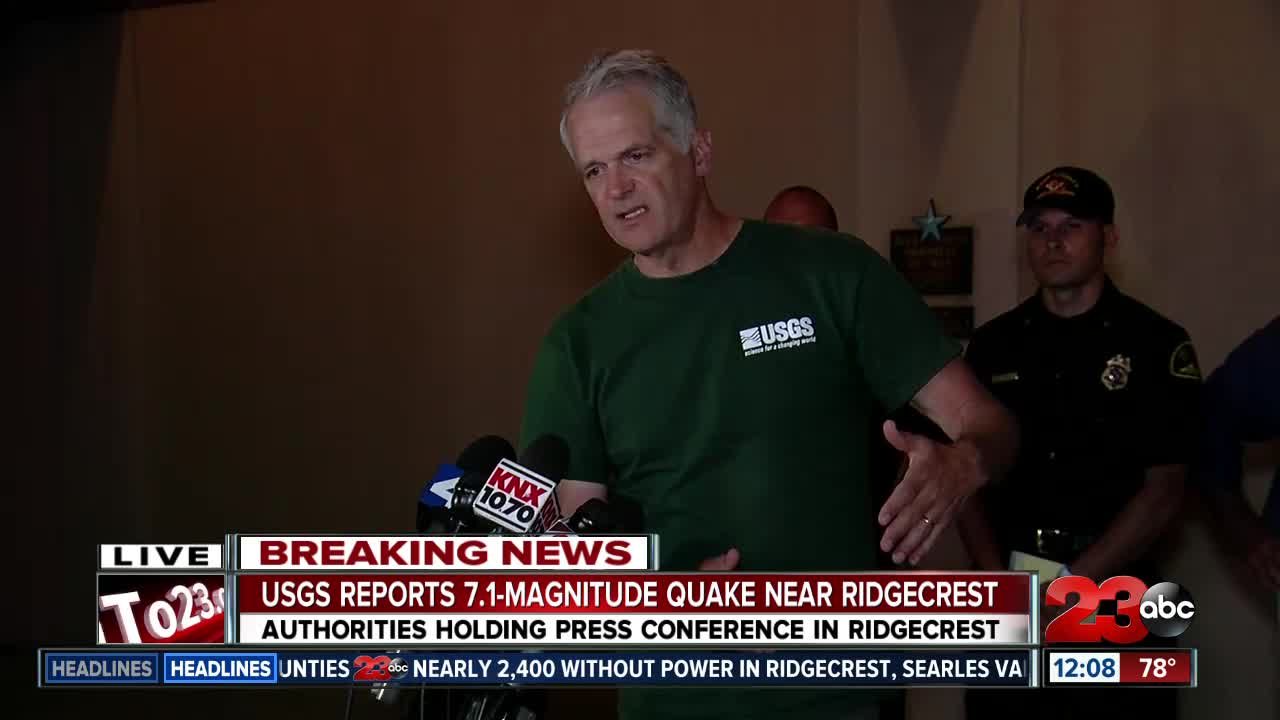 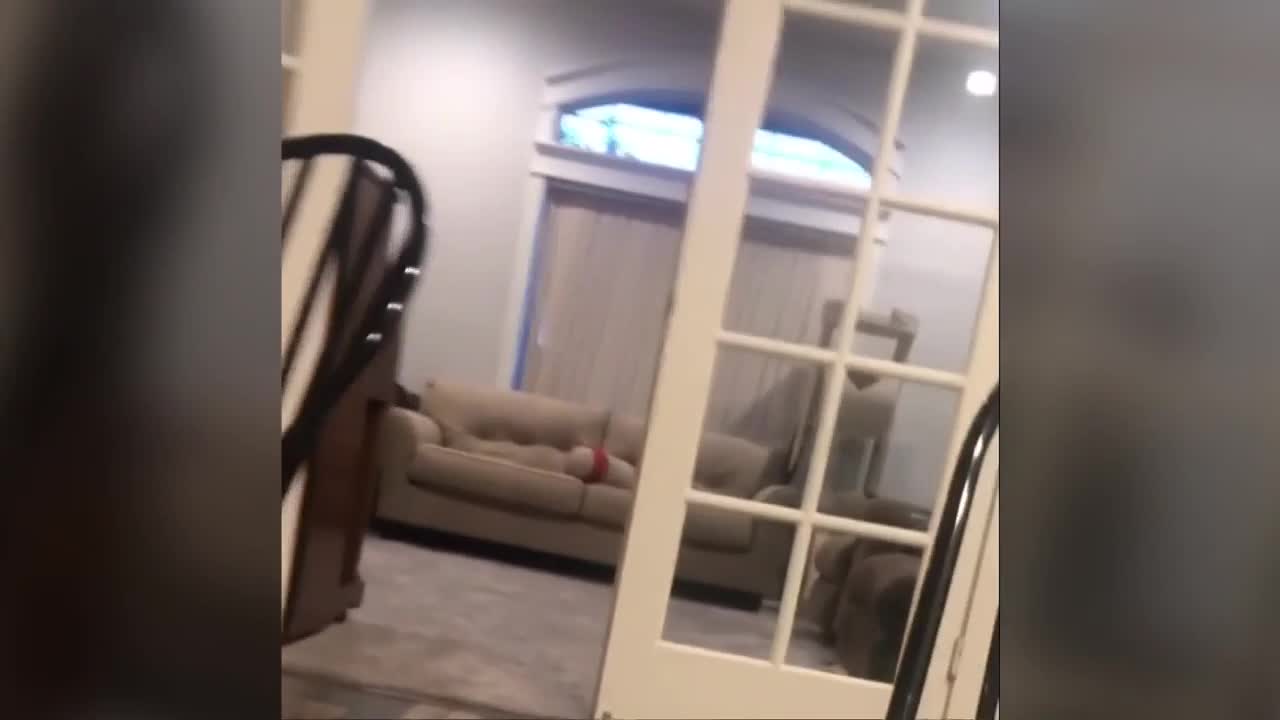 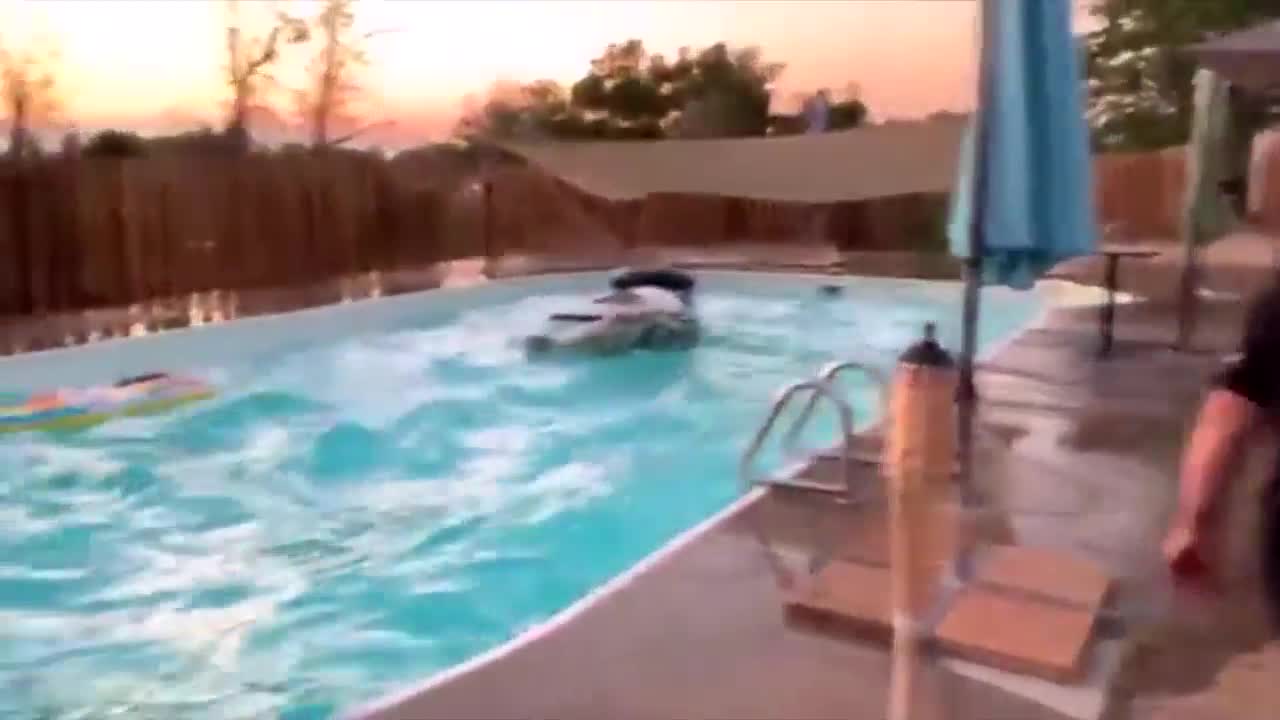 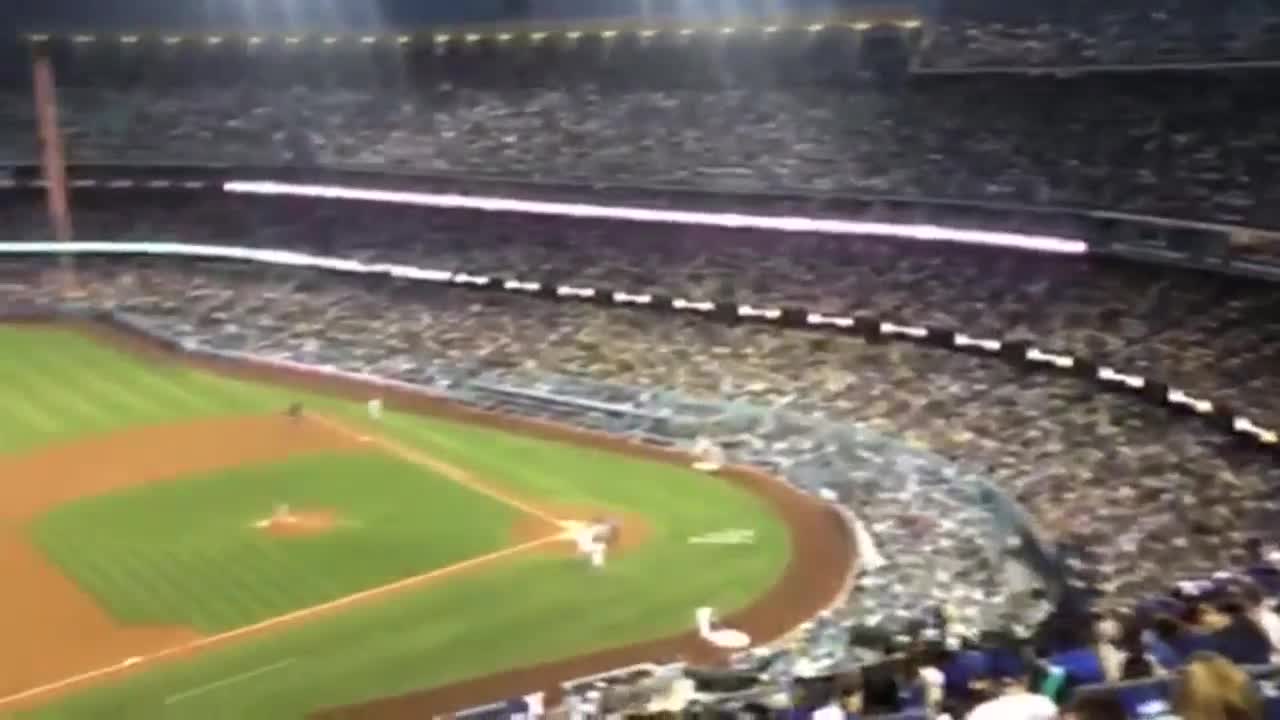 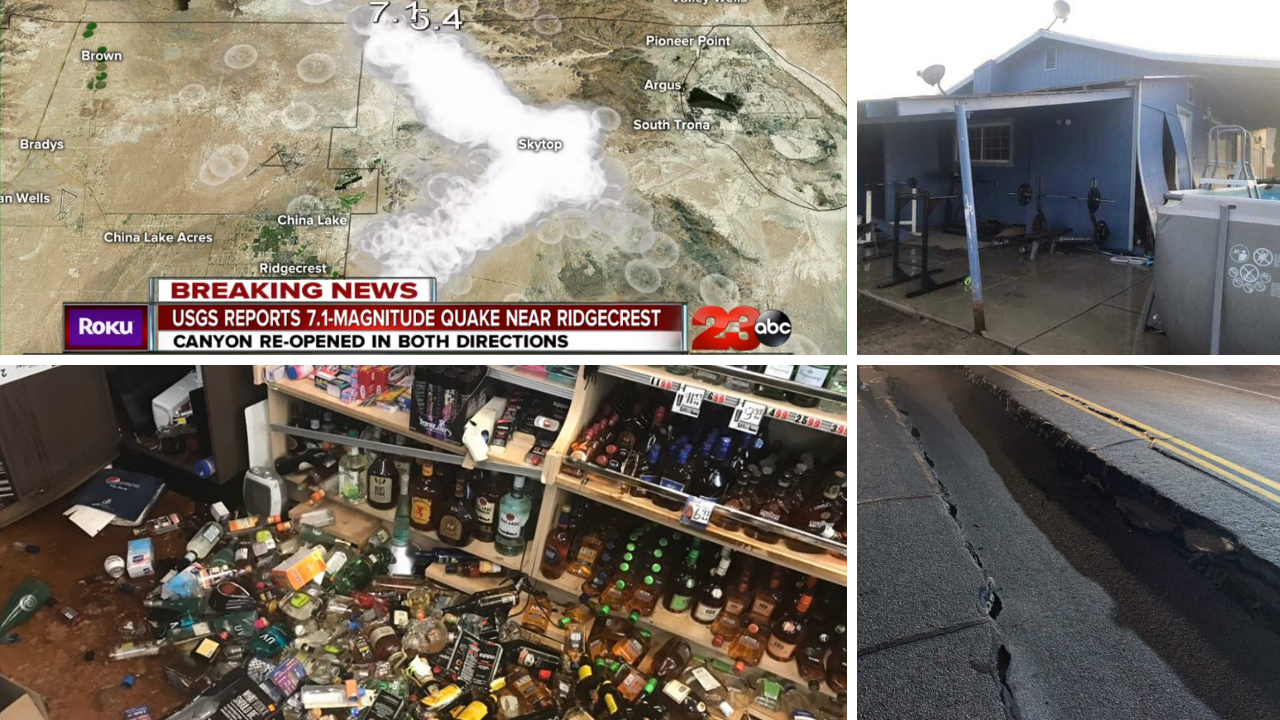 UPDATE: Governor Gavin Newsom issued the following statement: "On behalf of all Californians, I offer my heartfelt support to those affected by tonight’s earthquake near Ridgecrest. The State of CA will continue to offer support to aid residents in the region. Earlier this evening I formally requested a Presidential Emergency Declaration for Direct Federal Assistance to further support emergency response and recovery in impacted communities. I have also activated the State Operations Center in Mather, California to its highest level and the center is already working closely with state, federal and local emergency managers and first responders.”

UPDATE: According to the Red Cross, there are 129 people at the Kerr McGee Community Center in Ridgecrest. They currently have sufficient food and water, but are looking for a backup shelter site if needed. Supplies are being provided by LA and Kern County.

The Red Cross is asking that residents do not send any donations right now, but await instructions from the organization as the current situation makes it difficult to process the donations at the emergency shelter. If people still would like to help out, the Red Cross is accepting monetary donations on their website and volunteers are welcome.

There are no plans to close the shelter and it will remain open until the community no longer needs it.

UPDATE: According to the USGS, over 270 earthquakes of a 2.5 magnitude or stronger hit the region on Friday, July 5.

UPDATE: According to the Southern California Edison website, over 2,500 customers are experiencing power outages.

UPDATE: In tonight's press conference in Ridgecrest, authorities stated that the city is suffering from gas leaks, water line breaks and building collapses. As a result, Governor Gavin Newsom has requested a presidential emergency declaration. LA County, Riverside, Fresno, and San Bernardino are assisting. However, getting resources in some areas has been a challenge. Priories continue to be medical support and firefighters.

The California Highway Patrol is working on road closures and checking on the structural integrity of roads and overpasses. The CHP also has aircraft searching as well.

The National Guard has a joint task force of about 200 to provide support services and FEMA is activating two teams to assist in recovery.

UPDATE: Kern County has received requests from residents wanting to donate. The county wants residents to know "we currently do not need donations and would ask for the community’s help in holding off until we know if anything is needed."

We’re again receiving requests for individuals wanting to drop off donations. We currently do not need donations and would ask for the community’s help in holding off until we know if anything is needed. @KTLA @CountyofLA @FresnoCountyCA @23ABCNews @bakersfieldnow @KGETnews

UPDATE: Highway 178 has been re-opened. The road was closed following a rockslide that covered portions of the highway. Authorities are warning drivers to be careful because of potential falling rocks.

UPDATE: the LA County Fire Department announced on Twitter that their "USAR Task Force 136 and Haz-Mat Task Force OES 811 has been requested to Ridgecrest for assistance in the rescue and recovery effort."

**UPDATE** EARTHQUAKE | 7.1 earthquake in Ridgecrest, Ca | Our highly trained and specialized USAR Task Force 136 and Haz-Mat Task Force OES 811 has been requested to Ridgecrest for assistance in the rescue and recovery effort. #LACoFD #Earthquake

UPDATE: The City of Tehachapi is reporting that everything is "good" and that everything is "working as it should." There have been no damage reported and no calls for service. Adventist Health has been contacted in case anyone in Ridgecrest needs help.

UPDATE: From ABC News: A powerful 7.1 earthquake shook Southern California late Friday, one day after a 6.4 magnitude earthquake rocked the region on the Fourth of July.

EARTHQUAKE: A powerful 7.1 earthquake shook Southern California late Friday, one day after a 6.4 magnitude earthquake rocked the region on the Fourth of July.https://t.co/C9JE4m5SJU pic.twitter.com/AfxFaEv6U1

UPDATE: There are reports, including video, that shows the effects of the earthquake was felt as far away as Scottsdale, AZ.

UPDATE: Senator Dianne Feinstein (D-Calif.): “Tonight’s earthquake, again centered near Ridgecrest, is currently listed at 7.1 magnitude by the U.S. Geological Survey. This powerful aftershock, one of 1,400 reported by scientists today, shows that yesterday’s temblor was just a foreshock.

“The potential for danger can’t be underestimated, and residents of Southern California must be prepared in case there are further, more dangerous quakes.

“My office is in close contact with FEMA to determine whether there are any injuries and the extent of damage, as well as what role the federal government can play in responding. My staff is ready to mobilize to ensure that support quickly reaches those Californians who need it.

“Governor Newsom wisely declared a state of emergency yesterday, and the Los Angeles Fire Department is now working under its emergency earthquake protocol. My thanks go out to all the first responders in Ridgecrest and throughout the region who are standing by to help.”

UPDATE: According to the Army Corps of Engineers there are "no concerns" regarding the Lake Isabella dam. They currently have crews on-site now and preliminary inspection shows no issues and the dam "looks good." They're now doing a more in-depth inspection, but at this point, no concerns.

UPDATE: According to Tehachapi City Hall, "the city... has felt the majority of the aftershocks. Some very strong. As a matter of Standard Operating Procedure we have checked our water and wastewater systems and found no damage and all systems working."

UPDATE: Viewer Lisa Walker has provided photos from the rock slide that has closed Highway 178.

UPDATE: There is a report of a fire in Ridgecrest in the 400 block of Jean Avenue.

UPDATE: Ontario Airport in Ontario, California has been evacuated and closed.

UPDATE: According to ABC7 "People reported feeling the earthquake in areas as far as San Francisco and Las Vegas. The quake was felt downtown as a rolling motion that seemed to last at least a half-minute. The U.S. Geological Survey says it also was felt in Mexico."

UPDATE: LAX is reporting that airport crews continue to inspect facilities and runways and there are no initial reports of damage or injuries from the #earthquake - assessment is ongoing #LAXalert

UPDATE: The American Red Cross says the shelter at the Kerr McGee Community Center (100 W California Avenue in Ridgecrest) continues to remain open to those affected by tonight's earthquake.

UPDATE: USGS has updgraded the earthquake back up to 7.1 magnitude earthquake.

UPDATE: According to CalTrans Distric 6, "State Route 178 CLOSED due to rock slide in the Kern River Canyon. No ETO, Caltrans in route to access damage and determine removal from slide."

KERN RIVER CANYON: State Route 178 CLOSED due to rock slide in the Kern River Canyon. No ETO, Caltrans in route to access damage and determine removal from slide. pic.twitter.com/ec4zqchpKt

USGS says the 7.1 magnitude earthquake has now been downgraded to a 6.9.

Nearly 30 hours after a 6.4 magnitude earthquake struck Southern California on Thursday, an even more powerful quake rattled the earthquake-weary region on Friday.

The USGS gave the quake a preliminary magnitude of 7.1. The epicenter for this quake was approximately 11 miles from Ridgecrest, California, or 120 miles north of Los Angeles.