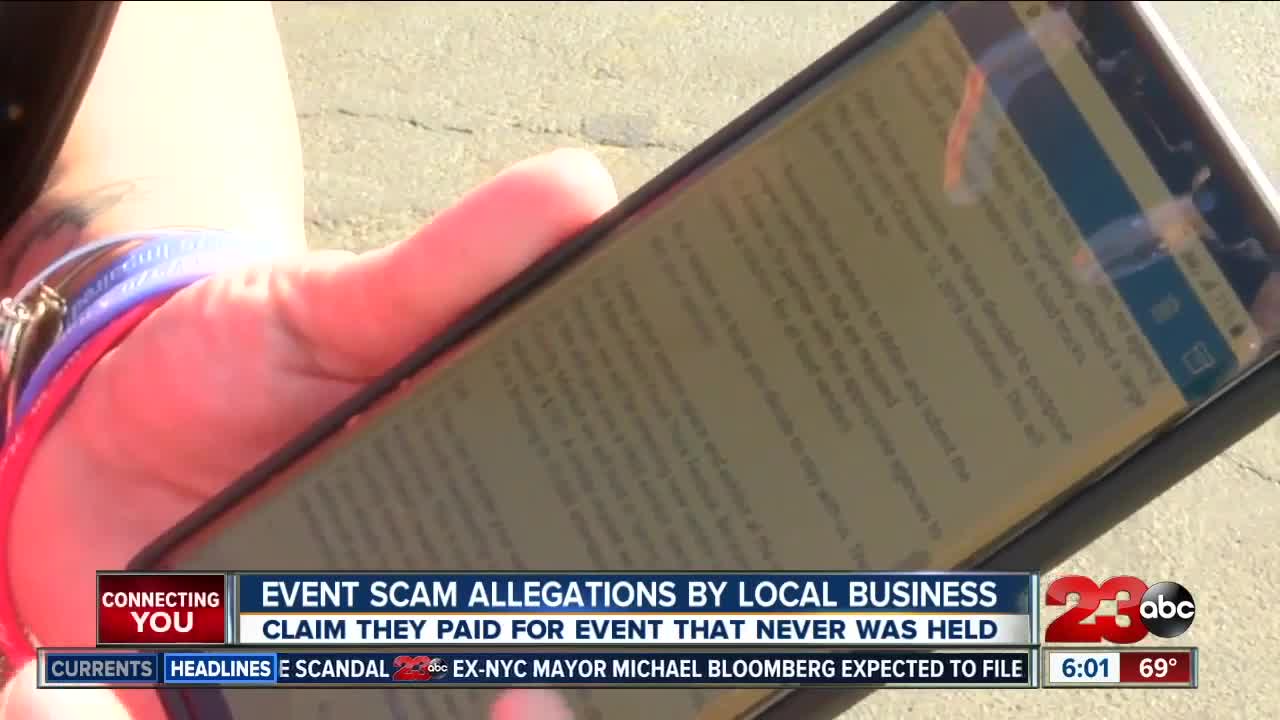 BAKERSFIELD,Calif. — Local business owners say that they signed up to attend the Bakersfield Food Festival and Business Expo scheduled for July. The event since then has been canceled and now they’re seeking answers and compensation.

Amber Morales, who owns three businesses in Bakersfield says that she was hoping to attend the expo organized by ReZcom and 10keventz to further expand her business.

"It's sad and disheartening that someone would do that to people," Morales said. "If you are going to promote something you should follow through but to continue to take people's money is frustrating."

Morales says she paid $97 to attend and serve as a vendor for the expo. She says she was told by the organizer, Amir Khajavi, that it would be rescheduled.

"There were a lot of people promoting so it looked legit," Morales said. "They even had events during the week at different restaurants where they would offer to do business things," Morales said.

According to the Bakersfield Food Truck Festival and Business flyer, the event was scheduled for July 27 at the Kern County Fairgrounds free for attendees.

The expo would allow visitors to browse hundreds of merchants and business vendors.

The week of the scheduled event, 23ABC was told by organizers that it was canceled due to circumstances outside of their control and reschedule for October 12th.

"I feel like this is going to come back and bite them and its sad that they would do this to people in their community who are trying to make ends meet," said Morales.

23ABC reached out to the Kern County Fairgrounds who shared that the event was scheduled for the original July date, but a new date was never rescheduled, including October 12th.

Vendors tell 23ABC that they started receiving conflicting reasoning for the cancellation which caused further frustrations.

The email says it will take up to 90 days for vendors to receive a refund.

Also, it states if any "vendor requests a refund they will be prohibited from vending at future events."

Despite the explanation, some vendors started requesting refunds and soon all communications stopped.

23ABC tried to reach both companies ReZcom and 10keventz through email and Facebook. When 23ABC called the organizer a message played stating that this number is no longer receiving incoming calls.

23ABC was able to speak to one vendor who has filed a report with the Better Business Bureau.

Officials at the bureau said there is currently one complaint filed against the company ReZcom.

Officials say that the case was closed because they were unable to reach the ReZcom owner.

Also, they want to remind individuals if they are experiencing similar issues to file a report and contact their credit card company's fraud department.

The Bureau also shared that if they receive a significant number of reports then they will alert the Federal Trade Commission.

The Better Business Bureau says that some tips to look out for when dealing with businesses are to check the creation date of the business, verify they have a website and an active contact number.

Morales says she will be filing a report with the Better Business Bureau. 23ABC has yet to hear from for ReZcom or 10Kevents regarding these allegations.