A community in shock describes suspect they know

On his 16th birthday, the student carried a loaded .45 handgun to his high school north of Los Angeles, pulled it out of his backpack and gunned down five of his classmates, authorities said. He saved the last bullet for himself. 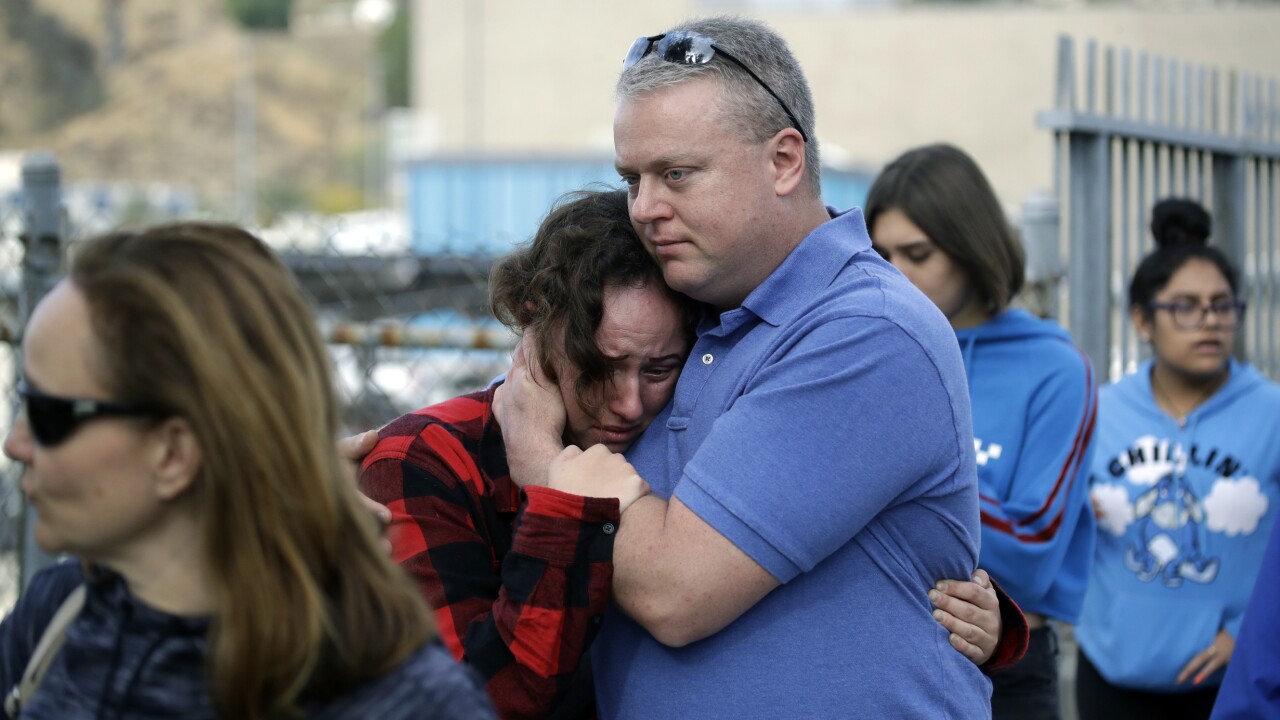 On his 16th birthday, the student carried a loaded .45 handgun to his high school north of Los Angeles, pulled it out of his backpack and gunned down five of his classmates, authorities said. He saved the last bullet for himself.

As the suspect laid in a hospital Thursday night suffering from a self-inflicted gunshot wound to the head, classmates and neighbors struggled to reconcile his alleged actions with the person they knew. He was a good student, an athlete, and friends say, literally a Boy Scout. He'd been hit hard by the recent death of his father, one neighbor said, but otherwise seemed like a typical teenager.

Sheriff's officials declined to publicly identify the suspect because he is a minor.

Investigators had not discovered a motive for the attack as of Thursday afternoon, Los Angeles County Sheriff's Capt. Kent Wegener said at a press conference. Detectives served a search warrant on a residence believed to be the suspect's home, Wegener said. He said there was no history at that address indicative of problems prior to the shooting.

Another sheriff's official, Tim Murakami, tweeted that rumors that the suspect may have posted threats on social media would be investigated.

"I literally thought he was a normal kid," said Brizio DelRosario, 16, who ran with the suspect on the Junior Varsity Cross Country team. "We would run together sometimes. The last time I saw him was at a race about two weeks ago, he was totally normal. I started next to him and he wished me luck."

"He wasn't a quiet or a weird kid," DelRosario said.

Another teammate, who asked that his name not be used, said the student was in a group of about seven or eight friends who all ran track at Saugus High and went to parties together. He said he knew the shooting suspect "very well" and that he is "the sweetest kid you'll ever meet."

He said he first met the alleged shooter when the suspect was a freshman and he was a sophomore. They became close friends shortly after the alleged student gunman's father passed away in 2017.

"(He) is shy," the friend said. "I saw (him) yesterday, we went on a hill run with maybe four guys. He was totally normal, cracking jokes as usual."

The friend explained that the cross-country team is on off-season right now but that they're required to run a mile a day regardless. The shooting suspect had actually suggested the hill run, which meant running up a hill behind the Saugus campus and back down through a neighborhood.

On Thursday, the friend went to school for his first period economics class on the upper campus.

"During class we could see kids running and dropping their backpacks. At first I thought they were running because they were late for second period but then I realized we were still in the middle of first period," he said. "Someone came in and was clearly distressed and said there was a shooter."

"We turned off the lights and barricaded the door," the student said. "I grabbed scissors just in case I had to fight..." Two of the suspect's five victims were fatally wounded.

The student in the economics class said he had once gone to a shooting range with the suspect. He said he knew the student had access to guns and that he grew up around them but it was never a concern because he knew how to handle them and was responsible.

He also said the suspect's mom is "the sweetest woman I've ever met," saying that whenever she would drop off or pick up her son from practice, she would make it a point to say something kind to the guys.

Kelly Axen said she has lived next to the suspect and his family for the past six and a half years. She said in years past she would pick the suspect up from school, help him with homework and even help to cook his meals.

She said he appeared to be struggling since the death of his father in 2017 and leaned heavily on his mother and sister for support. His parents divorced in 2016.

Axen said neither she nor her husband, who has known the family even longer, saw any warning signs for Thursday's shooting.