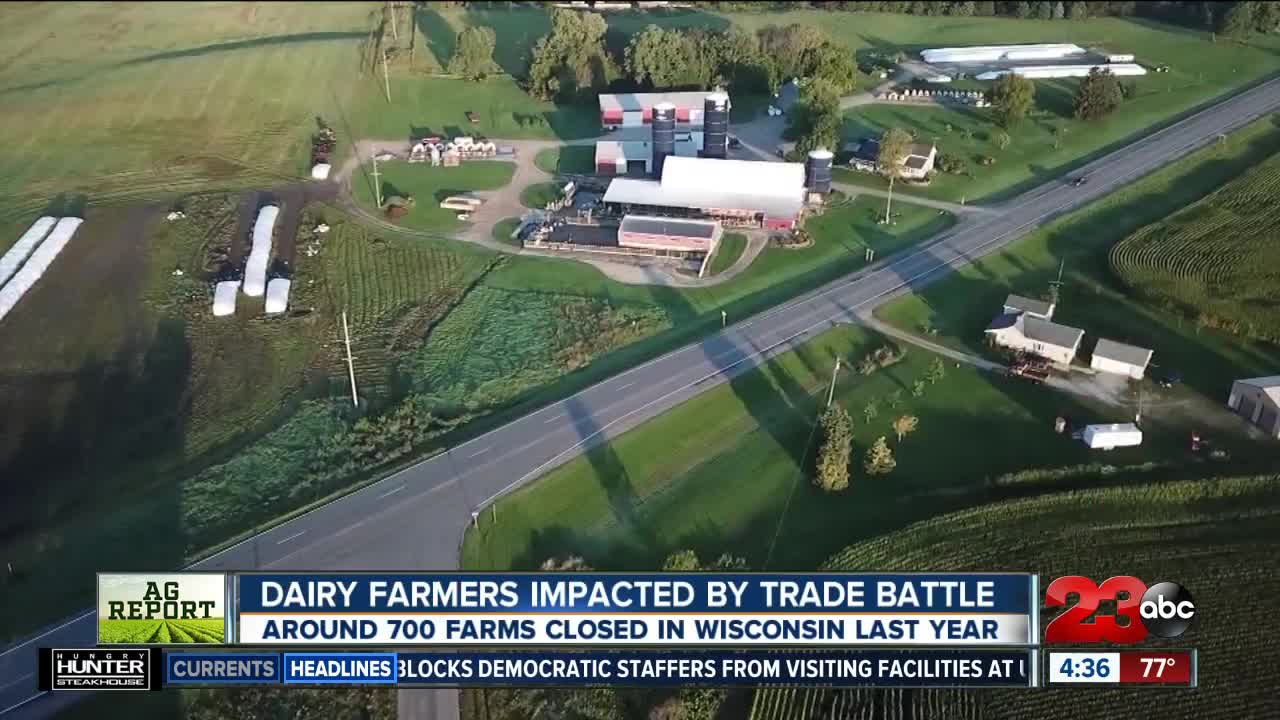 The United States/China trade war has continued to impact agriculture around the country. Plus, the Farmers' Almanac just came out with its winter outlook and it looks like areas east of the Rockies all the way to the Appalachians will be hit the hardest with bitterly cold conditions.

The United States/China trade war has continued to impact agriculture around the country. Some dairy farmers in Wisconsin are blaming the trade dispute for the recent problems.

The average price for milk is around $16 per 100 pounds. For most farmers that is less than the cost for them to produce it and way down from the $24 per one hundred pounds they were getting 5 years ago.

Last year Wisconsin saw nearly two dairy farms close per day, adding up to around 700 farms. To ensure that didn't happen to her, Wisconsin farmer Janet Clark quit an insurance job and moved back to the farm that's been in her family five generations. Like a lot of dairy farmers, she voted for President Trump.

President Trump's trade disputes have hurt dairy prices and dairy exports. To diversify some dairy farms started growing crops - corn and soy - whose prices have also been hurt by trade tariffs. The White House is trying to reassure farmers concerned about the tariffs. The Trump administration is pushing the president's signature trade deal, the U.S.-Mexico-Canada Agreement (USMCA) -- which would help farmers. However, only Mexico has ratified the deal at this time.

The Farmers' Almanac just came out with its winter outlook and it looks like areas east of the Rockies all the way to the Appalachians will be hit the hardest with bitterly cold conditions. The northeast is expected to have colder-than-normal temps. Only a third of the country will see normal winter temperatures. And if you're already looking ahead to spring, the almanac says the warmer temperatures will take a while to arrive.

More accurate measurements of crop water needs, as well as natural pest control and improved food safety, are among the technological solutions for ag being nurtured in a Northern California business incubator. It's called Ag Start. The woodland based organization works to help people turn ideas into viable businesses. The incubator director says that can take time because agricultural projects may take longer to show a definitive impact.

Finally, Martinelli's Sparkling Cider dates back to 1868 when Stephen G. Martinelli started making hard apple cider in his brother's barn using apples from California's first commercial orchards. The Central Coast business continued to ride a high of popularity until prohibition when the fresh apple market dried up for most farmers in the area.

But today it's Stephen's great-grandson, John Martinelli, who keeps the juices flowing in Watsonville. The family continues to pay homage to their past with a display of historic bottles and labels.

"Grandfather developed the apple-shaped bottle, and that became our signature item because it shows the consumer this is what it is. It's 100 percent apple juice from U.S. grown apples and there are no additives of any kind."

The 151-year-old business continues to thrive thanks in part to growers in the nearby Pajaro Valley.