Says he was a victim of "adult bullying"

Behind glass and with his hands in cuffs Qiu Feng Ke went over the details of an on-going dispute with his neighbor Edward Lee Tudor — who he killed on Tuesday.

PASCO COUNTY, Fla. — Behind glass and with his hands in cuffs Qiu Feng Ke went over the details of an on-going dispute with his neighbor Edward Lee Tudor — who he murdered on Tuesday.

Ke said for the last two years he couldn’t sleep because of loud noise coming from Tudor’s home.

He said his younger neighbor would pound on the walls, yell profanity and blast the TV — all while mocking him.

“I’m a loner. Someone’s a loner, is nice to people, don’t push him. You know. Talk to him. Don’t try to bully him. That’s why I tried to make point,” Ke said.

Making the point, ended in murder Tuesday on Richborough Drive in Beacon Square in Holiday.

“I’m at my friends house and somebody just came in here and shot,” said a woman on a 911 call released Tuesday.

Investigators say Ke went to Tudor’s home, shot him once, then finished him off with several more shots — all while Tudor begged for his life. 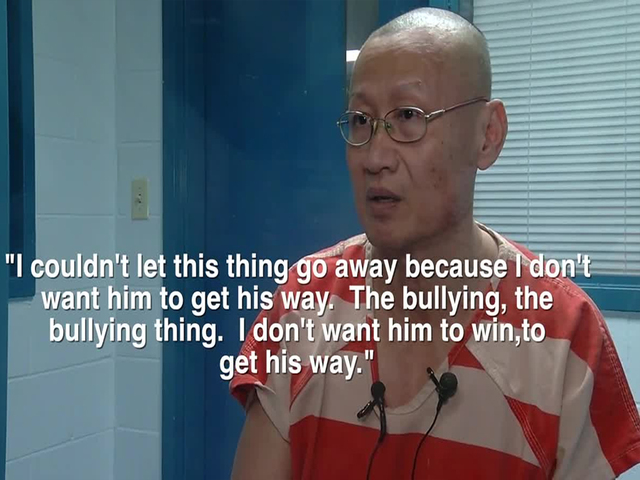 Ke said he wanted to hang himself after the shooting, but couldn’t do it. Now he wants to represent himself in court and doesn’t plan on fighting the charges.

Ke told investigators he also planned to murder a woman who lived at the home, but she wasn’t there.

He told reporter Erik Waxler he wouldn’t change what happened.

“For him (Tudor), I don’t have regret. But for his parents, yes. Because I understand, you know. But I kind of feel I had no way out,” Ke said.

No one we talked to in the neighborhood had ever seen any signs of trouble.

Ke said he never called police over noise complaints or other issues with his neighbor and he wasn’t really clear as to why.