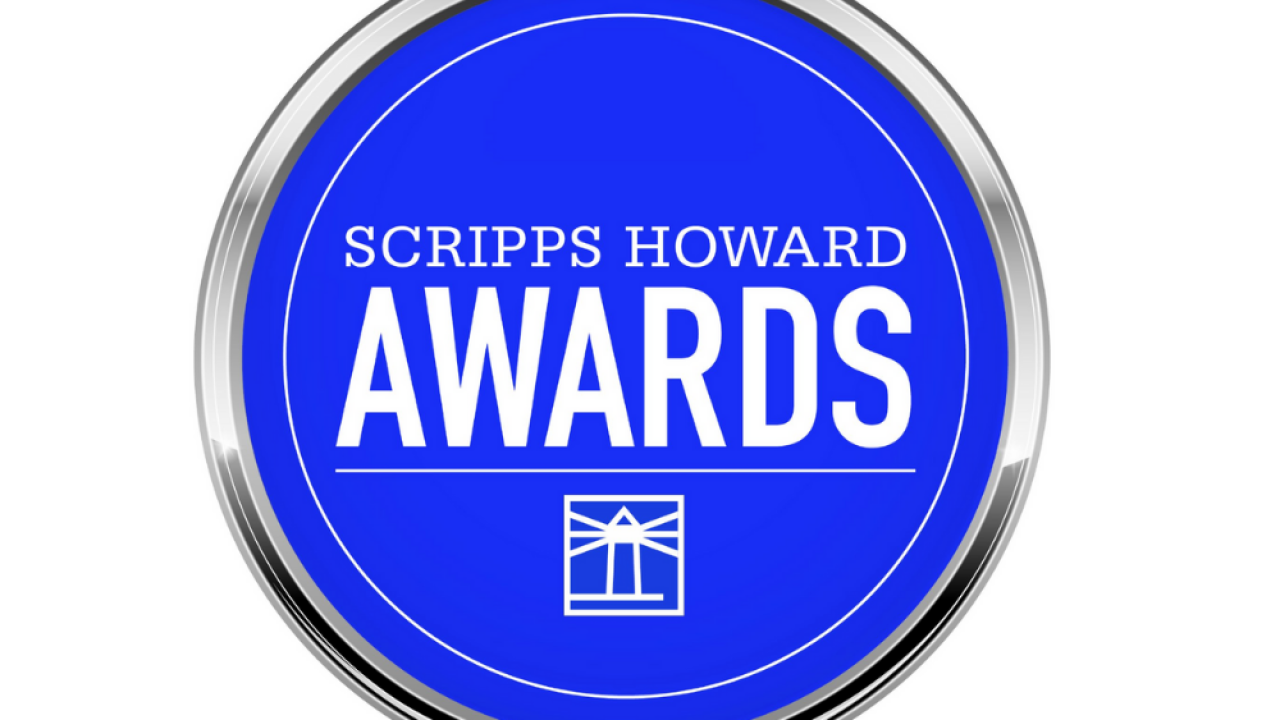 CINCINNATI, Ohio — Comprehensive multi-platform reporting and collaboration with news outlets are trends among winners of the 2018 Scripps Howard Awards.

"Their work embodies the meaning of journalism that brings important truths to light, holds the powerful accountable and changes our world," said a release from the Scripps Howard Foundation.

Winners of its 66th awards competed in 15 categories. The Scripps Howard Foundation will present more than $170,000 in prize money to the winning organizations and journalists at its annual awards show on April 18 in Cincinnati.

Here are the winners for this year:

Judges’ comments: “Breaking news coverage is not often an area where demonstrable impact can be shown, but the Sun Sentinel’s dogged real-time pursuit of every angle of the breaking story and underlying contributors to this tragedy has had a lasting impact on Parkland, on journalism and on the national conversation about guns in America.”

Judges’ comments: “The winner in this category, in part, wins for taking on a subject that, 20 years from now we will likely look back on and wonder why it was a subject at all. We were most impressed at the mature, non-sensational way this story treated the subject.”

Broadcast – National, International Coverage: MSNBC for “Putin’s Covert War” – An investigation into the main players in the 2016 election meddling story.

Judges’ comments: “MSNBC reporter Richard Engle goes inside one of the most important and hard-to-crack stories of our time – the spread of Russian influence on international affairs and on U.S. politics. He shows, through audio recordings, for example, how American troops confront Russian-hired mercenaries in Syria, and he tracks down a former KGB spy turned double agent now living in London to learn more about how Russia put out ‘hit contracts’ on opponents.”

Business/Financial Reporting: International Consortium of Investigative Journalists, NBC News Investigative Unit, Associated Press and more than 50 media partners for “Implant Files” – An investigation into the medical devices and implants industry and its related injuries and deaths.

Judges’ comments: “Excellently planned, researched, documented, reported and written with key findings highlighted throughout. The compelling personal stories of patients give life to the numbers.”

Finalists: Bloomberg – “Sign Here to Lose Everything”; Reveal from the Center for Investigative Reporting, PRX, Associated Press and PBS NewsHour – “Kept Out”

Community Journalism: Knoxville (Tennessee) News Sentinel for “The Devastation of TVA’s Coal Ash Spill” – Coverage of the workers who were sickened cleaning up the country’s worst coal ash spill.

Judges’ comments: “Reporter Jamie Satterfield delivers excellent watchdog work that truly holds the powerful accountable. Her investigation is deeply reported and swarms all the important angles. The series of stories were well sourced and contained videos with on-the-record accounts that hit viewers between the eyes. Satterfield’s extraordinary efforts result in change-inducing and life-saving journalism.”

Environmental Reporting: National Geographic for “Planet or Plastic?” – Reporting on the alarming volume of plastic in our world.

Judges’ comments: “National Geographic’s ‘Planet or Plastic?’ has catapulted the conversation onto a global platform by creating awareness and catalyzing action. Journalism like this shines a light on policy flaws and irresponsible manufacturing and empowers citizens and communities to be proactive about protecting our environment and the people and animals it supports.”

Distinguished Service to the First Amendment: The Dallas Morning News for “Pain and Profit” – An investigation into the failures in Texas’ privatized Medicaid system.

Judges’ comments: "The impact of the investigation is impressive. Sick people are getting the services they are entitled to; the state has spent $7 million on 100 new regulators; the legislature is considering a package of bills expected to lead to a crackdown on companies that deny medically needed services…none of this could have been accomplished without the use of public records requests and resourceful use of duplicate records held by other states when their requests were denied.”

Human Interest Storytelling: The New York Times and ProPublica for “Blood Will Tell” – An investigation of a forensic technique used in the criminal justice system, despite concerns about its reliability.

Judges’ comments: “Extraordinary storytelling with careful selection and organization of a massive amount of material. The story somehow manages to present a troubling indictment of blood spatter analysis and its misuse in our courts — and at the same time, to tell the deeply human tragedy of this husband and wife and all those decades the man spent in prison.”

Finalists: The New York Times – “Lost in the Storm”; Univision – “America First: The Legacy of an Immigration Raid”

Innovation: BBC for “Anatomy of a Killing” – A project that used forensic analysis of viral video footage to prove the occurrence of a series of executions in Cameroon, Africa.

Judges’ comments: “This is a story where the innovation was integral to the journalism instead of just enhancing the story. This investigation done from laptops in London taps readily available digital tools to show the potential power of investigative journalism when traditional skills are paired up with modern digital resources. The genesis of this project – a video that went viral – is one that can serve as a replicable model for other newsrooms.”

Reporters Wa Lone and Kyaw Soe Oo gathered comprehensive evidence from survivors, witnesses and families of the victims to tell the story of atrocities that may otherwise not have been brought to light. The reporters remain imprisoned in Myanmar, but the work they began resonated throughout the world.”

Judges’ comments: “Frontline and GroundTruth introduce viewers to this issue through the lens of a generation of children on the Marshall Islands, their lives likely be displaced by rising waters. Using a smartly presented mix of documentary video, explainer text and illustrated graphics to present the science, ‘The Last Generation’ gives a space for these kids to articulate what climate change means for their futures. And as viewers navigate through the story, they might also glimpse their own potential fate."

Opinion: Palestine (Texas) Herald-Press for “What Are They Hiding?” – Commentary that questioned two issues affecting the Palestine community: an athletic commission’s treatment of a football player and the state of Texas’ rush to execute condemned prisoners.

Judges’ comments: “In their clarity and detail, the editorials would be worthy of the best efforts of the largest metro newspapers in America. The fact that they were all published by a small Texas paper with less than a 10,000 circulation is an example of journalism that speaks truth to power when doing so could invite truly unpleasant consequences.”

Radio/Podcast: Michigan Radio for “Believed” – A podcast that tells the stories of survivors of abuse by former Olympic gymnastics doctor Larry Nassar.

Judges’ comments: “The lifelong costs and consequences of childhood sexual abuse were made vividly, urgently clear in the superb Michigan Radio series ‘Believed.’ Using interrogation tapes, archival audio and in-depth interviews with the victims and their families, the Michigan Radio reporters skillfully led listeners through a staggering loss of innocence.”

Topic of the Year: Midterm Elections: Vice News for “She’s Running” – A four-part web series on female candidates running for office in the 2018 midterm elections.

Judges’ comments: “What Vice News did so impressively in its series “She’s Running” was document just how hard it is to be a young female candidate running for the first time on her own terms – and winning. Each episode was filled with candid moments that revealed what it takes to run for office. We were impressed by Vice’s choice to do this in a non-narrated way, giving the viewer front-row seats to the unfolding drama of this race."

Judges’ comments: “Each submission demonstrated his mastery of key photographic elements such as light, composition and an intimacy that builds a visual narrative that draws the reader in and connects you to the subjects so that one feels their plight and our shared humanity. In this, he fulfilled one of journalism’s highest principles, giving voice to the voiceless.”

Journalism Education Awards
The Scripps Howard Foundation, in partnership with the Association for Education in Journalism and Mass Communication, also announced the winners of its two journalism education awards:

Administrator of the Year: Dean Diane McFarlin – College of Journalism and Communications, University of Florida (Gainesville)