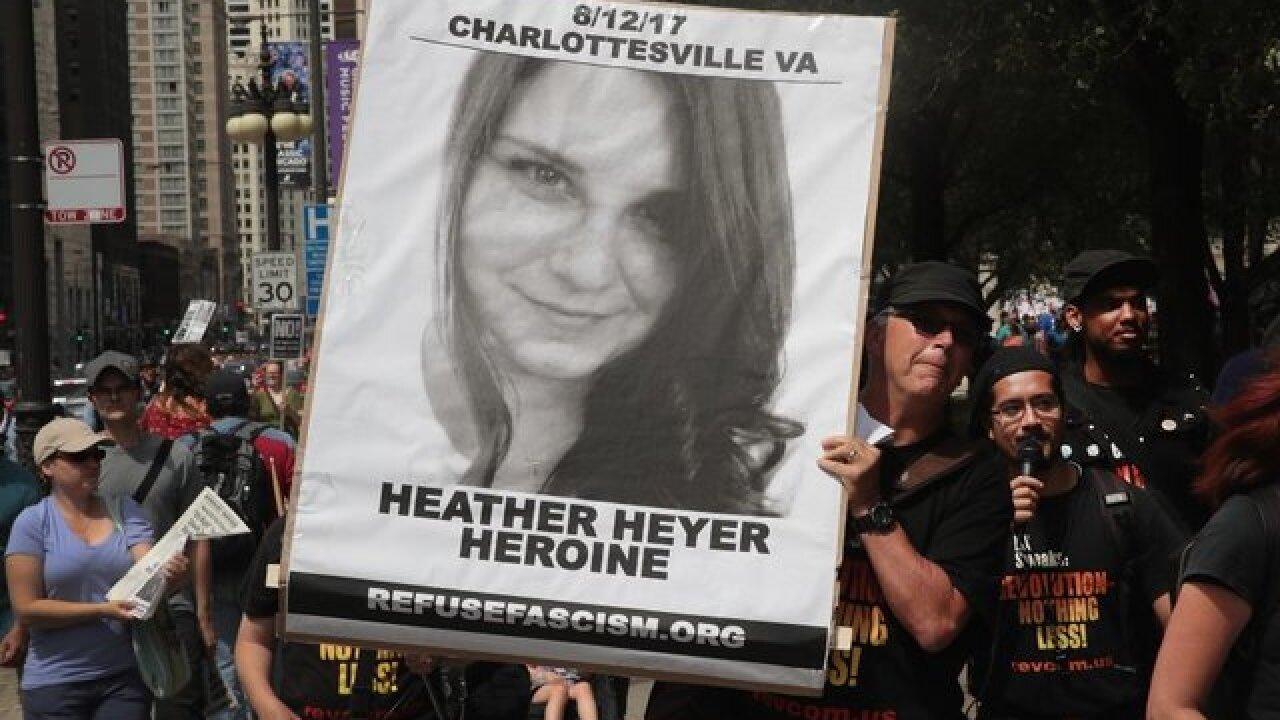 The jury in the trial of James Alex Fields has reached a verdict. Fields was found guilty of first-degree murder in the death of Heather Heyer, eight counts of malicious wounding and one count of failing to stop at an accident involving a death. Fields faces a maximum sentence of life in prison.

The commonwealth argued that Fields intended to harm the counterprotesters. The defense says he was in a state of panic and acted in self-defense.

The panel of seven women and five men, which includes one black man and 11 white people, was sent home Thursday night after attorneys made their cases. The jury began deliberations Friday morning, and concluded in the afternoon.

In her closing argument, defense lawyer Denise Lunsford described the incident as the result of a "perfect storm" of events over which Fields had no control, sending him into a panic.

Earlier in the day, he was hit with something that could have been urine, she said. He had just left the company of people he was with earlier and felt vulnerable by himself, Lunsford said. She said he believed a group of protesters behind him was about to swarm his car, although no evidence was presented to support that.

"He thought people were after him," she said. "The difference between a joyful crowd and an angry mob lies in the beholder."

In its closing argument, the Commonwealth hammered home the heart of its case, that Fields was unprovoked and acted with the intent to harm people.

Throughout the day of the rally, Fields was never harassed or assaulted, nor was he ever in any kind of peril, prosecutor Nina-Alice Antony said.

His social media postings, texts with his mom and jail phone calls reflect his true feelings and intentions, Antony said. During the trial, prosecutors introduced into evidence Instagram posts by Fields of memes showing a car driving into a group of people described as protesters.

"His Instagram posts tell you exactly what he thinks of the type of people who take to the streets to protest," Antony said.

"And when he passes that happy crowd in front of him on Fourth Street, those images pop into his head and he seizes on the opportunity to make his Instagram posts a reality," she said.

Attorneys delivered their closing arguments after testimony from the final defense witness.

His testimony was largely consistent with other defense witnesses, who told the court that Fields didn't appear angry or agitated before he got behind the wheel of his car.

While walking with other rallygoers, however, Fields allegedly yelled back at a counterprotester who shouted something along of the lines of "Get out of our town," according to Matthews. The witness said he couldn't recall what Fields said.

On Wednesday, fellow protesters testified that Fields asked them to lunch shortly before ramming his car into a throng of people.

Calhoun said he and his girlfriend attended the rally and spent part of the day with Fields, whom they had just met that day.

Calhoun testified that Fields was calm and seemed tired.

Under cross-examination, Calhoun testified that the only interactions he and Fields had with counterprotesters were verbal, not physical. Calhoun said counterprotesters didn't attack them or throw anything at them.

Earlier in the trial, a recording of a jailhouse phone call that Fields had with his mother in March was played in court. In it, Fields said that he was defending himself from "a violent mob of terrorists."

On Wednesday, Trooper Clifford Lee Thomas, a crash reconstructionist for the Virginia State Police, testified that Fields had accelerated to a maximum of 28 mph before crashing into a Toyota Camry.

The impact caused the Camry to go from zero to 17 mph in 150 milliseconds, Thomas said.

Bolstad said she met Fields when they were turned away from McIntire Park by police. She testified she and Calhoun were approached by Fields and another man, who suggested they travel together as there is safety in numbers.

"I felt really comfortable with them," she said. She added that Fields "didn't seem angry" and "seemed normal."

She never saw Fields during times when bottles were being thrown, she told the court.