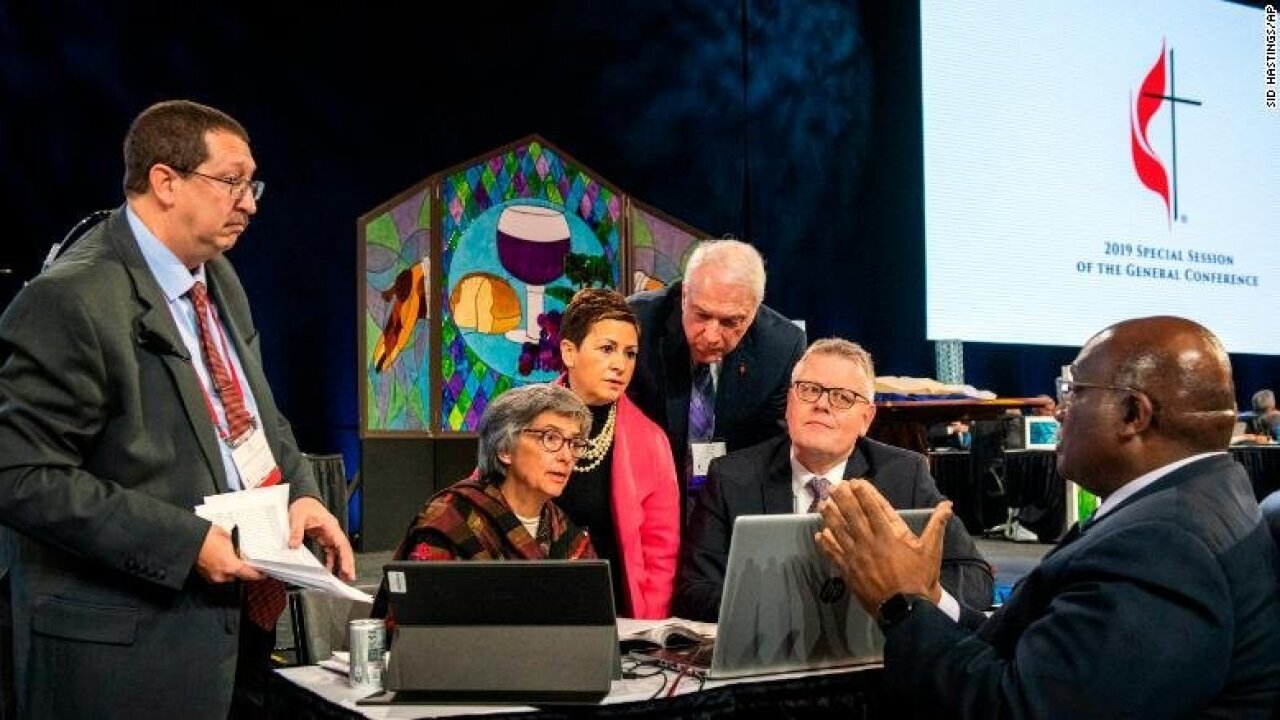 United Methodist churches and clergy could face removal from the denomination if they do not affirm its stance against gay marriage and noncelibate LGBT clergy by 2021. The church reached the decision in a vote at a General Conference in St. Louis on Tuesday.

The vote for the "Traditional" plan came after the church voted to reject an earlier proposal, known as the "One Church" plan, which would have allowed local churches to perform same-sex weddings and hire openly LGBT clergy. That move was pitched by proponents as a way to keep the increasingly fractious denomination together amid widespread disagreements about scripture and the morality of same-sex relationships.

"Many of us have members who are saying they will leave," said the Rev. Tom Berlin of Virginia, a member of the church's legislative committee. "A virus of conflict will spread."

Instead, United Methodists voted to push forward the "Traditional" plan, which passed with a vote of 438 to 384.

"Today, more than 800 worldwide General Conference delegates affirmed the Traditional Plan as The Way Forward for The United Methodist Church," Bishop Scott Jones said in a statement. "This decision resolves a long-standing debate about how we can best accomplish our mission of making disciples of Jesus Christ for the transformation of the world."

"Our views on same-sex marriage have not changed. We will continue to welcome lesbian, gay, bisexual, transgendered and queer persons to our churches and affirm their sacred worth," the statement said.

Rejection of the "One Church" plan, which had support among United Methodist bishops in the United States, drew criticism.

"The United Methodist Church's special General Conference failed Tuesday to love LGBTQIA people, recognize their gifts in the church, maintain our unity in the midst of diversity, and to live out our Gospel mandate to seek justice and pursue peace," General Secretary Susan Henry-Crowe of the General Board of Church and Society of The United Methodist Church said in a statement.

"We worship a fully-inclusive, justice-seeking God," the statement said.

Several members from African nations had stood on Tuesday to support the "Traditional" plan, saying it accords with scripture's teachings on sexuality.

"Today the church in Africa is growing in leaps and bounds because we are committed to biblical Christianity," said the Rev. Jerry Kulah, who is from Liberia. "You cannot be performing Christianity differently in America and Africa and suggest that we are one church."

Several young Americans, on the other plan, pleaded to have their voices heard.

"We need a church that is still alive. This is our church, too, and I have thousands of people with me urging you to hear this call," Jordan said.

Cara Nicklas, a delegate from Oklahoma, said that she's received numerous messages from people calling her support for the church's current stance on LGBT relationships "mean-spirited and unloving."

"Surely you don't want to be united with me if I am as mean and unloving as you say," she said. "You will not stop trying to make me fit your idea of a loving person."

The General Conference took an unusual turn later Tuesday afternoon when Carlene Fogle-Miller, a young delegate from Florida, proposed an investigation into "vote buying" at the conference. The proposal to send the matter to the church's ethics committee passed 417-388.

"If there is nothing to hide, there is no need to fear an ethics investigation," Fogle-Miller said on Twitter. "Period."

The United Methodists' Book of Discipline states that all people are of "sacred worth" but denounces the "practice of homosexuality" as "incompatible with Christian teaching."

Openly gay and lesbian clergy members can be removed from ministry, but church trials on the matter are rare.

In 2016, dozens of United Methodist clergy members came out as lesbian, gay or bisexual defying their church's ban on "self-avowed practicing homosexuals" serving in ministry and essentially daring their supervisors to discipline them.

In a public letter posted online, 111 pastors, deacons, elders and candidates for ministry said church rules require "that we not bring our full selves to ministry, that we hide from view our sexual orientations and gender identities."

That campaign came after a similar letter issued by 15 Methodist ministers in New York, who also openly acknowledged that they are gay or lesbian.

In some parts of the United States, openly gay clergy serve with few if any restrictions. Conservatives argue that such policies threaten to break up the church into small, self-governing branches.

For more than a decade, liberal United Methodists have sought to push the church to adopt more lenient provisions, without success.

After the earlier vote to reject the more liberal proposal, Reconciling Ministries, a pro-LGBT church group, tweeted, "God weeps. The Spirit rages. The children of God are undefeated."