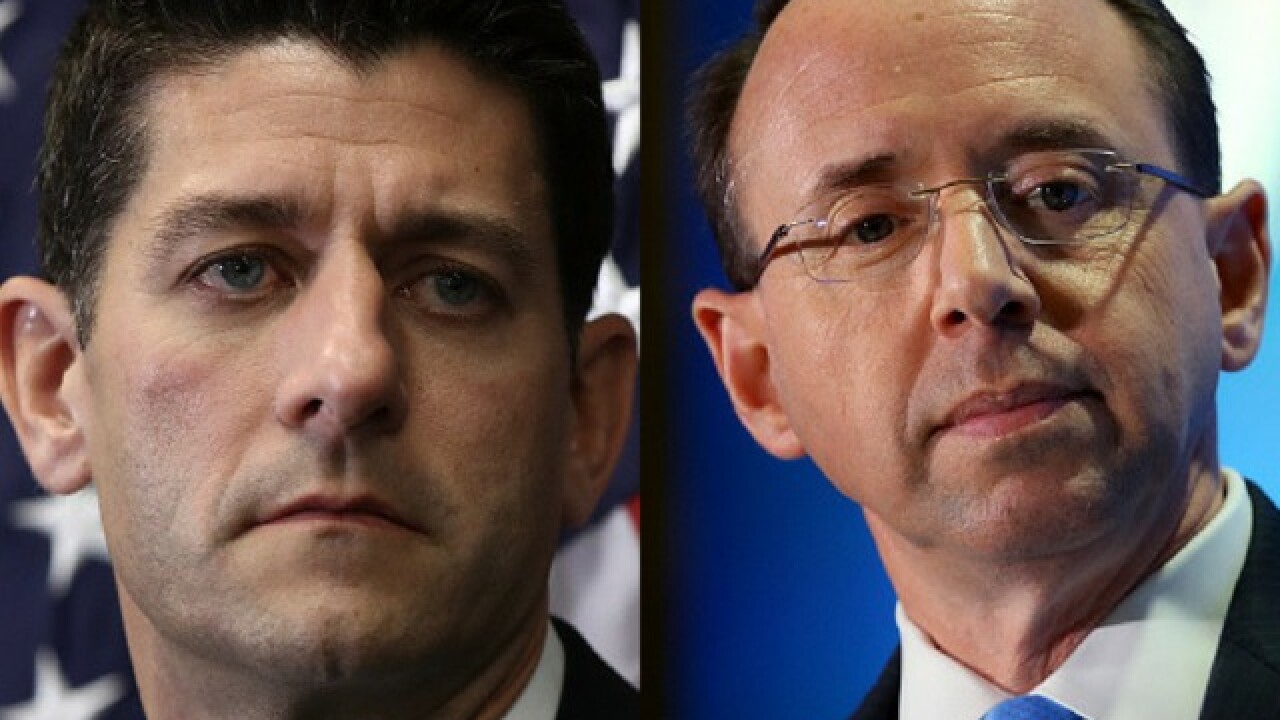 House Speaker Paul Ryan said Thursday he does not support House conservatives' efforts to impeach Deputy Attorney General Rod Rosenstein, who is overseeing the special counsel Russia investigation, dismissing it as "not the right way to go."

"Do I support impeachment of Rod Rosenstein? No, I do not," Ryan, a Republican from Wisconsin, told reporters on Capitol Hill Thursday.

He added, "I don't think we should be cavalier with this process or with this term."

Ryan cited multiple reasons for his opposition to the measure to impeach Rosenstein, including "it would derail or largely delay a big part of our agenda" and "tie the Senate into knots" if passed in the House.

"Number two: I don't think that this rises to the level of high crimes and misdemeanors," Ryan said. "I have a really high standard. Number three: We -- since I got involved -- [Republicans] have been getting a lot of compliance from [Justice Department officials] on the document request. We do not have full compliance. And we have to get full compliance. But we've been making tremendous progress to that point."

On Wednesday, House Freedom Caucus leaders Reps. Mark Meadows and Jim Jordan introduced a resolution to impeach Rosenstein, arguing he should be removed because of the Justice Department's "stonewalling" of congressional subpoenas and his hand in Foreign Intelligence Surveillance Act warrant renewals for Trump campaign foreign policy adviser Carter Page.

The resolution on its own does not mean that the House is on the verge of voting to impeach Rosenstein, and conservative House members agreed Thursday morning to holding off on such a vote until after the August recess.

Asked Thursday if he attempted to dissuade Meadows and Jordan from introducing the resolution, Ryan replied that "they know how I feel about this" and added that "different members have different beliefs" about how to get the Justice Department to fully comply with Congress's requests for documents.

On the House floor earlier Thursday, House Majority Whip Steve Scalise huddled with Meadows and Jordan and other House Freedom Caucus members. They agreed to hold off on pursuing the vote to impeach Rosenstein until after the August recess, according to a House GOP aide.