Woman surprises husband with pregnancy announcement on flight from Tampa

A South Tampa wife gave her husband an amazing surprise when she had the pilot announce huge news over the speaker on their flight: she was pregnant.

When David Rose climbed aboard a flight to Chicago from Tampa International Airport, he had no idea what was coming his way.

Little did he know his wife Audrey was planning a huge surprise announcement: she was pregnant with their second child.

The day before the surprise, Audrey found out she was pregnant, but she wasn't entirely sure. So the morning of the flight she woke up extra early (at 4:00 a.m.) and tested positive twice, so she knew she could set her plan in motion.

While her husband was in line getting coffee, she used that time to scribble a note to the flight staff.

She boarded the flight behind her husband and secretly handed the note to the flight attendant. 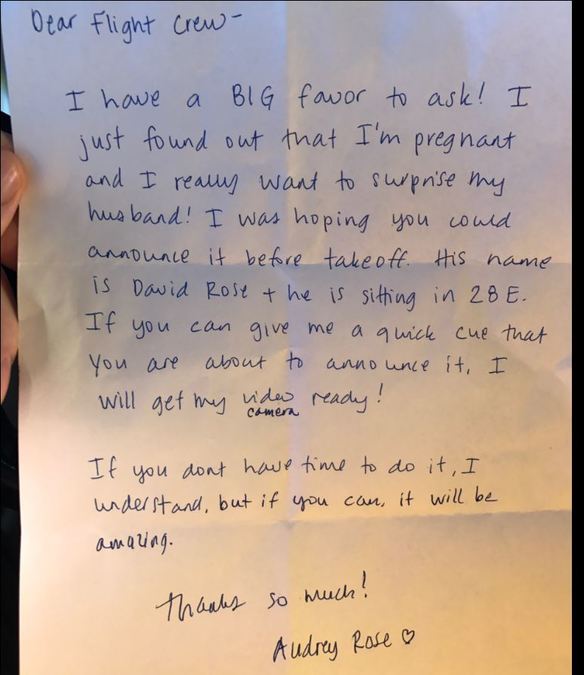 Audrey describes being super nervous as the attendant gave her a thumbs up.

She says David was on his iPad, so he didn't realize she was acting strangely.

The whole thing was caught on video:

Next thing they knew, the pilot himself came over the speaker and shared the exciting news.

Rose went on to say that her husband has a bigger vocabulary than just 'what,' and he was truly confused.

The South Tampa couple will certainly never forget the experience, and they even exchanged info with the pilot afterwards.

The Roses say they are due in May and don't plan to find out if it's a boy or girl until the birth.