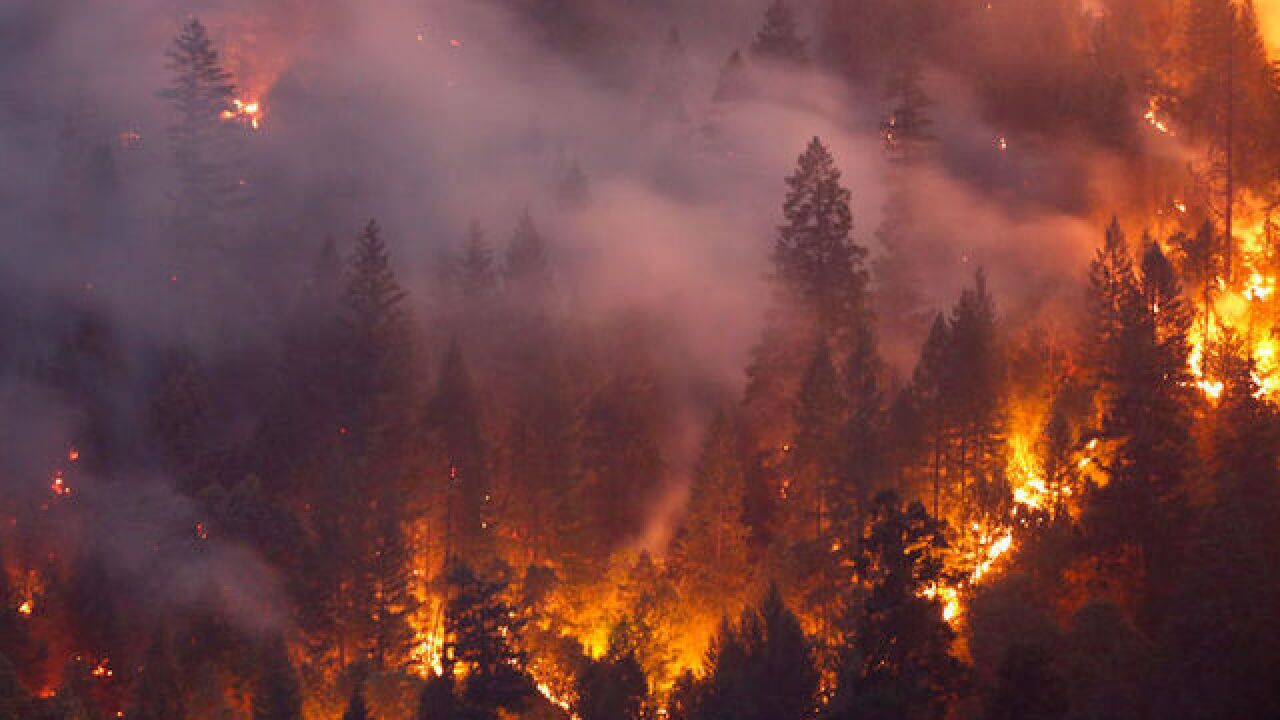 Image copyright 2018 Getty Images. All rights reserved. This material may not be published, broadcast, rewritten, or redistributed.
Terray Sylvester
<p>Forest burns in the Carr Fire on July 30, 2018 west of Redding, California. Six people have died in the massive fire, which has burned over 100,000 acres and forced thousands to evacuate since it began on July 23. </p>

The mammoth infernos raging across California will likely get worse before they get better, with menacing weather forecast for the rest of the week.

Eight people have already died from two of the most destructive wildfires -- the Carr and Ferguson fires.

And extreme heat -- combined with bone-dry conditions -- will help fuel the fires.

"California can expect to see hot, dry and breezy conditions through the end of the week," CNN meteorologist Gene Norman said.

Temperatures will soar into the lower 100s in many places, Norman said, and whipping winds will be "wildly fluctuating as the fires generate their own localized wind."

Across California, more than a dozen other large wildfires are blazing out of control. Here's a look at some of the most dangerous:

The deadliest of the current wildfires, the Carr Fire, is now the seventh most destructive inferno in California history, state fire officials said.

Six people have died in this blaze, including three members of the same family.

The Carr Fire has destroyed more than 112,000 acres, according to the California Department of Forestry and Fire Protection -- also known as Cal Fire. That's an area larger than Denver. It was 30 percent contained late Tuesday.

Josh Lister and his family lost their home and belongings after the fire swept through Redding, a city of almost 100,000 people.

"It was a firestorm when we left," Lister said.

Afterward, he was stunned to see the devastation in his neighborhood.

"It looked like an atomic bomb went off," he said.

The Carr Fire is so large and intense that it created its own localized weather system, making it difficult to predict which way the blaze will spread.

More than 3,300 fire personnel are battling the flames in triple-digit heat as shifting winds, dry fuel and steep terrain all work against them.

The flames were sparked July 23 by the mechanical failure of a vehicle, Cal Fire said. Since then, it has destroyed more than 880 homes.

After 19 days of destruction, the Ferguson Fire in central California was only 33 percent contained Tuesday evening.

Two people have been killed in the fire, but no homes have been damaged or destroyed, fire officials said.

A huge problem facing firefighters is that the flames are largely burning in steep, inaccessible terrain.

Unlike the Carr Fire, authorities don't know what started Ferguson, which has now engulfed more than 58,000 acres.

Wildfires 'we have historically never seen' before

In the past several days, smoke from the California wildfires has stretched all the way to Oklahoma.

And California has already spent a quarter of its firefighting budget for the year in the month of July.

"What we're seeing in California right now is more destructive, larger fires burning at rates that we have historically never seen," he said.