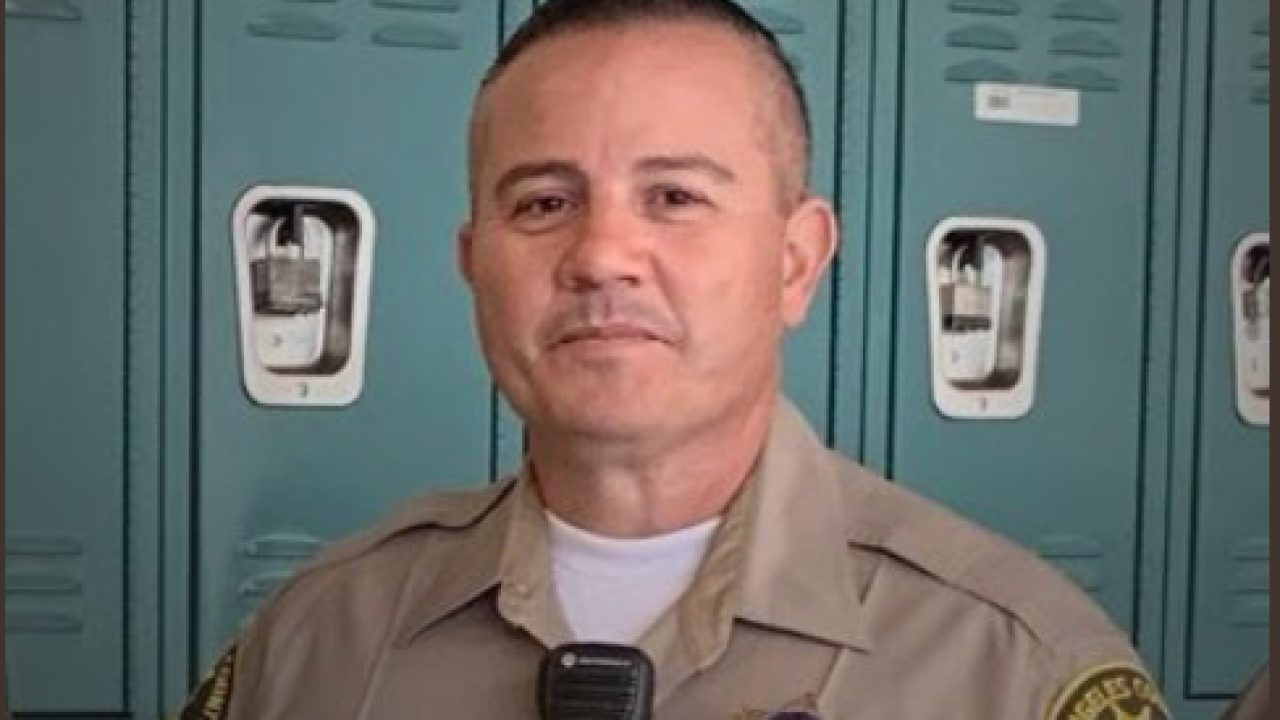 ALHAMBRA, Calif. (KABC) — A 30-year-old Utah man has been arrested in the apparently random shooting in Alhambra that left an off-duty sheriff's deputy in grave condition.

The suspect, identified as Rhett Nelson of St. George, Utah, is also suspected in the fatal shooting of another man in central Los Angeles Monday evening, according to police.

Deputy Joseph Solano, 50, was off-duty and in civilian clothes as he stopped at the Jack in the Box in Alhambra on Monday while getting an oil change for his car at a nearby Jiffy Lube.

He was shot in the head and remains on life support as of Tuesday, according to Sheriff Alex Villanueva.

Tuesday morning, Nelson apparently stopped at a church in Long Beach and called his father to say he had committed murder in Southern California.

His father called authorities in Long Beach, who were able to trace the number his father gave them to the church.

They found Nelson driving a short distance from the church, in the 2400 block of Granada Avenue in Long Beach, around 10:40 a.m. Tuesday and pulled him over. Sheriff's investigators were later able to connect him to the shooting and place him under arrest.

Nelson had previously been listed as a missing person out of Utah.

Today at approx 10:40am Long Beach PD observed a vehicle in the 2400 blk of Granada Ave Long Beach, matching description of suspect responsible for #LASD off-duty deputy shooting in Alhambra. Officers detained occupant of vehicle & he is being held by LASD as person of interest.

A massive manhunt had been launched for the suspect seen in surveillance footage shooting the deputy Monday at the restaurant, leaving him in critical condition.

The 13-year veteran of the department was in civilian clothes and waiting for his food when the suspect went up to him and shot him once in the back of the head, officials said.

"The shooting is on video," said Capt. Kent Wegner. "There doesn't appear to be an overt motive. There is no audio to the video, so we don't know if there were words exchanged."

The shooting occurred around 5:45 p.m. Monday at the Jack in the Box at Valley Boulevard and Fremont Avenue. The deputy had apparently gone for an oil change at a nearby Jiffy Lube and then went to the restaurant while waiting for the car service.
The deputy remains in critical condition and fighting for his life. He was taken to Los Angeles County + USC Medical Center, where a large contingent of sheriff's deputies converged at the hospital that night.

Sheriff's officials released photos of the suspect, who is described as a man between 20 and 30 years old and 5 feet 9 inches tall to 5 feet 11 inches tall.

He was wearing a burgundy short-sleeved button-down shirt, slim blue jeans, a light fedora hat and sunglasses. He was armed with a handgun.

He was later seen changing into a black T-shirt.

He was seen in surveillance video possibly tucking his gun in his waistband after the shooting. The suspect's vehicle is believed to be a white 2010 to 2014 Kia Sorento SUV with paper plates.

A $100,000 reward is being offered for information leading to the arrest and conviction of the gunman who shot the deputy.

The county is offering $50,000 and the Association for Los Angeles Deputy Sheriffs is matching the amount.

Anyone with information about the incident is encouraged to contact the Los Angeles County Sheriff's Department's Homicide Bureau at (323) 890-5500. If you wish to remain anonymous, call "LA Crime Stoppers" by dialing 800-222-TIPS (8477).