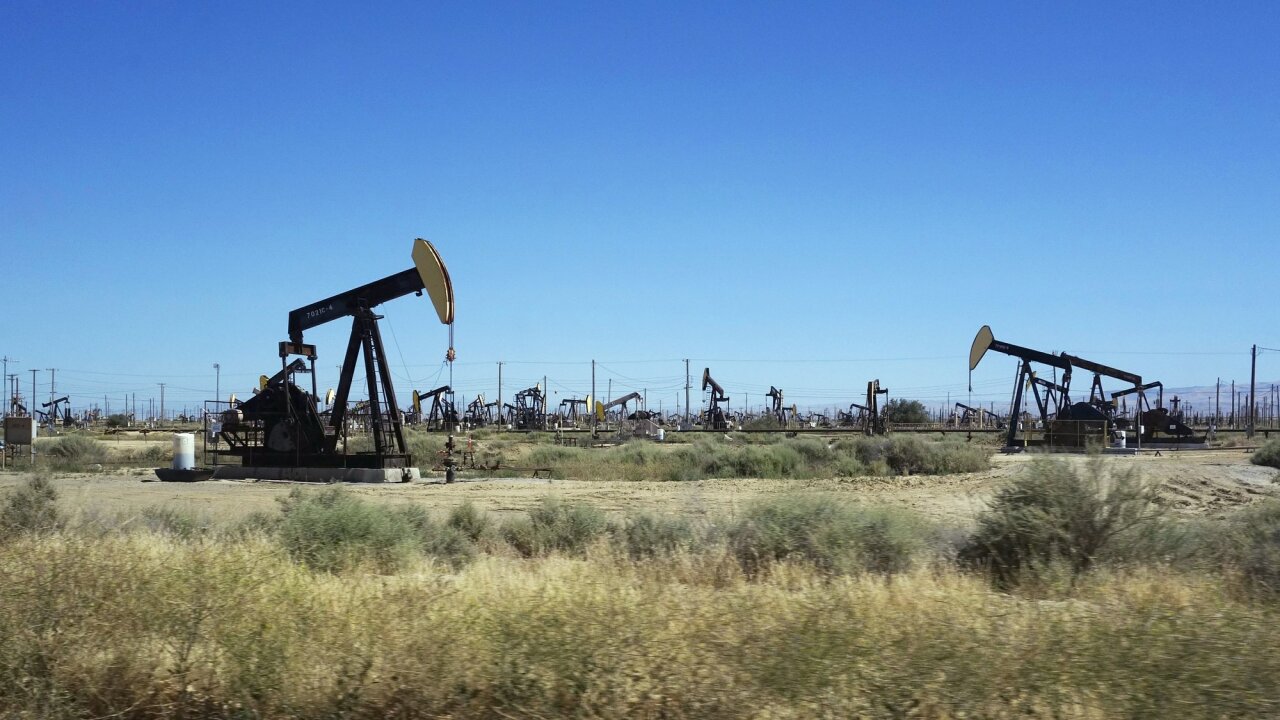 (AP Photo/Brian Melley)
This June 12, 2017 photo shows pumpjacks operating in the western edge of California&#39;s Central Valley northwest of Bakersfield. The federal government wants to reopen over 1.7 million acres (690,000 hectacres) in California to oil and gas drilling that includes fracking on land that has been off-limits since environmentalists sued in 2013. The Bureau of Land Management issued final plans Thursday, May 9, 2019 for oil and gas leases on 800,000 acres (324,000 hectacres) of federal land mainly between the Central Coast and Central Valley. (AP Photo/Brian Melley)

LOS ANGELES (AP) — The U.S. government moved Thursday toward allowing new oil and gas drilling on wide swaths of federal land in California that has been off-limits since environmentalists sued in 2013.

The Bureau of Land Management issued final plans for oil and gas leases on about 800,000 acres (323,755 hectares) in Central California. That comes less than a month after the agency issued a draft plan to allow drilling on more than 1 million acres (405,000 hectares) surrounding the Bakersfield area.

The move is part of the Trump administration’s broader goal to dramatically expand oil and gas development nationwide and make the U.S. energy independent. The effort, decried as a giveaway to industry and a desecration of public lands, has been frequently stalled by local opposition and court challenges.

Environmentalists who blocked the Obama administration’s previous efforts to allow new drilling by challenging its failure to account for the impact of hydraulic fracturing — or fracking — immediately criticized efforts to revive the plans.

“Trump’s new plan aims to stab oil derricks and fracking rigs into some of California’s most beautiful landscapes,” attorney Clare Lakewood of the Center for Biological Diversity said in a statement. “From Monterey to the Bay Area, the president wants to let oil companies drill and spill their way across our beloved public lands and wildlife habitat.”

Lawsuits by the center and Sierra Club forced the Bureau of Land Management to take a hard look at the environmental effects of fracking, which they said occurs in 90 percent of new wells. The technique, which blasts water, chemicals and sand underground to fracture rock to release oil and gas, has been criticized for causing seismic activity and harming water supplies.

The Bureau of Land Management said it expects that the two plans could lead to about 75 new wells drilled over the next 20 years and only a small number would involve fracking, spokeswoman Serena Baker said. Most of the areas that would be drilled are already used for oil production.

Kathleen Sgamma, president of the Western Energy Alliance, an association of independent oil and gas companies, said it was pleased the process was finally nearing an end. “The Trump Administration has complied with the court orders to analyze the impacts of fracking to fix the deficiencies of the Obama plans,” she said in a statement.

The Center for Biological Diversity said the number of acres on which drilling would be open in the Bureau of Land Management’s Central Coast region nearly doubled Thursday from a draft plan by the Obama administration.

Sen. Kamala Harris, D-California, a presidential candidate who recently packaged a group of congressional bills that would protect over 1 million acres of federal lands in California — including part of the Bureau of Land Management’s territory — also criticized the plan.

“This administration’s misguided plan to expand oil and gas drilling along California’s Central Coast is a direct threat to the health of the state’s environment and our fight against climate change,” Harris said in a statement. “We should be protecting our public lands and boosting the outdoor economy.”