The Latest: 20 patients sent back to evacuated hospital 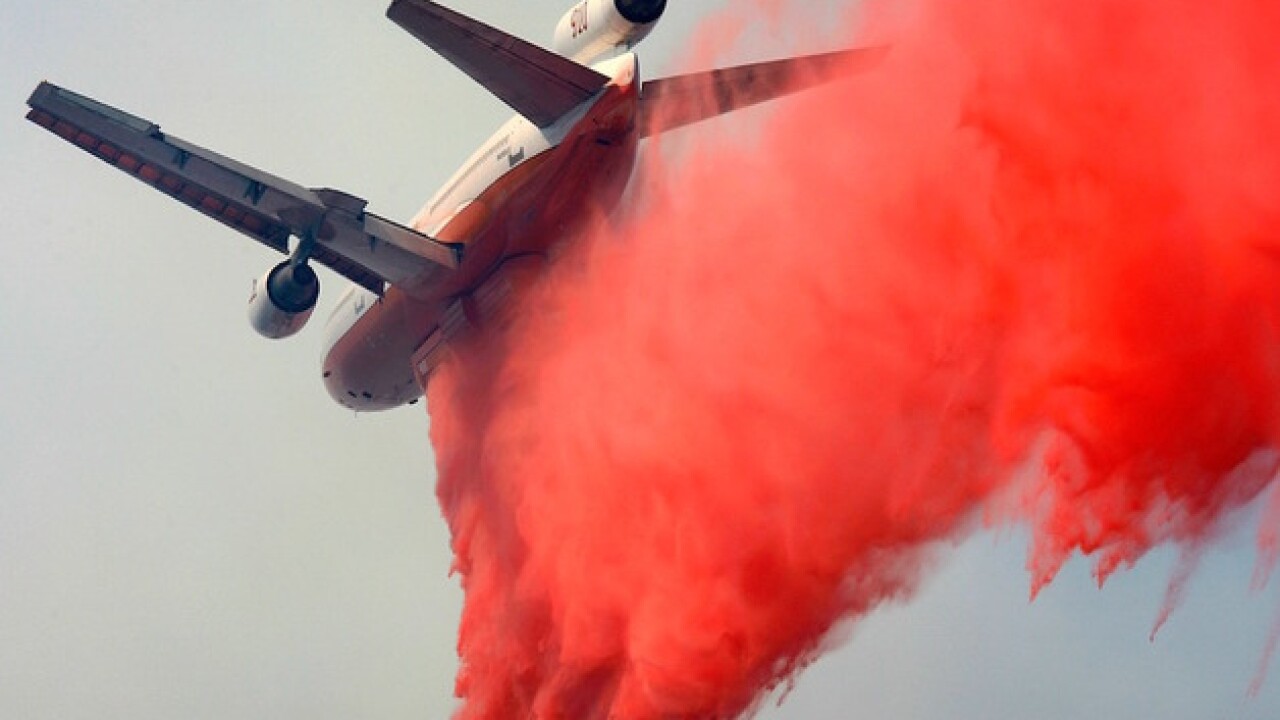 Copyright 2018 Scripps Media, Inc. All rights reserved. This material may not be published, broadcast, rewritten, or redistributed.
David McNew
<p>FAWNSKIN, CA - SEPTEMBER 18: Tanker 910, a DC-10 airliner modified for aerial firefighting, drops fire retardant on the 24-square-mile Butler 2 Fire on September 18, 2007 near Fawnskin, California. The converted passenger jet can carry 50 tons of water or fire retardant and drop 12,000 gallons in as little as eight seconds. Before the California Department of Forestry (CDF) and Forest Protection activated Tanker 910, it carried up to 285 passengers for American Airlines and later as many as 380 on charter flights flown by Omni Air International to Hawaii. (Photo by David McNew/Getty Images)</p>

The Latest on evacuations ordered for a wildfire in Northern California (all times local):

A spokeswoman for a Northern California hospital that evacuated because of a fast-moving wildfire says 20 patients had to go back to the facility because of gridlocked traffic.

Adventist Health Feather River Hospital spokeswoman Jill Kinney said Thursday clinics and other outbuildings were on fire or had been damaged, but the main hospital was untouched.

The hospital is in the town of Paradise about 180 miles (290 kilometers) northeast of San Francisco. At least 27,000 people in the town were ordered to flee.

California Department of Forestry and Fire Protection Capt. John Gaddie said Thursday he did not know how many structures were destroyed and did not know the extent of people’s injuries.

At least 27,000 people in the town of Paradise about 180 miles (290 kilometers) northeast of San Francisco were ordered to flee.

A woman who evacuated a Northern California fire says people abandoned their vehicles to flee the blaze and held babies and pets as they escaped.

Gina Oviedo said there was fire everywhere as she got out of the town of Paradise about 180 miles (290 kilometers) northeast of San Francisco on Thursday.

Oviedo described a devastating scene, saying homes were engulfed in flames and utility poles were crashing down. She said people left their vehicles and ran when they started hearing explosions.

At least 27,000 people in Paradise were ordered to flee.

He is confirming reports that people had to abandon their vehicles as they try to flee the fast-moving fire.

He says the agency is spread thin on resources but officials are “doing everything we can to get people out of the affected areas.”

At least 27,000 people in the town of Paradise about 180 miles (290 kilometers) northeast of San Francisco were ordered to flee Thursday.

He says he wants people to know that if they can evacuate, they need to evacuate.

Butte County Sheriff’s spokeswoman Miranda Bowersox says 27,000 people in the town of Paradise have been ordered to flee a fast-moving wildfire in Northern California.

Shelley Freeman says her family and friends scrambled to evacuate in Northern California as a fast-moving fire approached.

She says she heard from a friend that people, horses and dogs had congregated in a parking lot of a Kmart in the town of Paradise. The friend waiting there with dogs in her car described to her all the trees around the store as on fire.

Freeman says her friend described being surrounded by explosions in the parking lot and soon being unable to see the fire because of all the smoke.

Freeman says she’s had trouble reaching her family and friends who live in the area because phone lines are down. Those she has heard from say the roads are gridlocked.

Freeman says she’s scared for everyone and feels helpless from far away.

A Northern California hospital says it has evacuated its patients because of a fast-moving wildfire.

Adventist Health Feather River said in a post on Twitter Thursday that is transported to surrounding area hospitals. Hospital officials have not returned calls from The Associated Press about the evacuation.

The Chico Enterprise-Record reports that a retirement home and Ponderosa Elementary School were also evacuated.

Evacuated hospital patients are being taken to hospitals throughout the region.

Shary Bernacett says she and her husband tried to get people to leave the mobile home park they manage in Paradise, California, with just minutes to evacuate as a wildfire approached the east side of town.

Bernacett said she and her husband “knocked on doors, yelled and screamed” to alert as many of the residents of 53 mobile homes and recreational vehicles as possible to leave the area Thursday morning as authorities ordered the area evacuated.

She and her husband grabbed their dog, jumped in their pickup truck and drove through 12-foot high flames before getting to safety on Highway 99.

She says the air is black with smoke and ash.

A wildfire in Northern California has grown to nearly 8 square miles (20 square kilometers) as officials rush to evacuate residents.

Tina Greer says the Paradise care home where her disabled son lives with five other patients is evacuating, but it takes time to pack the patients’ medical equipment and medicine. Her 25-year-old son has cerebral palsy, needs a wheelchair to get around and is fed through a tube.

Greer says heavy ash is falling in Chico, about 14 miles (22 kilometers) west of the fire.

The Butte County Sheriff’s office says an evacuation order was issued Thursday for areas of Paradise, a town of about 27,000 people 180 miles (290 kilometers) northeast of San Francisco.

Greer works for a phone answering service that is handling numerous phone calls for the Feather River Hospital, which has been ordered to evacuate and is not responding to calls.

Authorities in Northern California have ordered mandatory evacuations in a rural area where a wildfire has grown to 1,000 acres (405 hectares) amid hot and windy weather.

The Butte County Sheriff’s office says an evacuation order was issued Thursday for areas of Paradise, a town of about 27,000 people 180 miles (290 kilometers) northeast of San Francisco.

The California Highway Patrol closed Highway 70 near the fire and urged motorists to avoid the area.

Fire officials say firefighters are working to access the area and that the blaze continues to spread.

The National Weather Service issued red flag warnings for fire dangers in many areas of the state, saying low humidity and strong winds were expected to continue through Friday evening.