The Latest: Unknown number of deaths from California fire 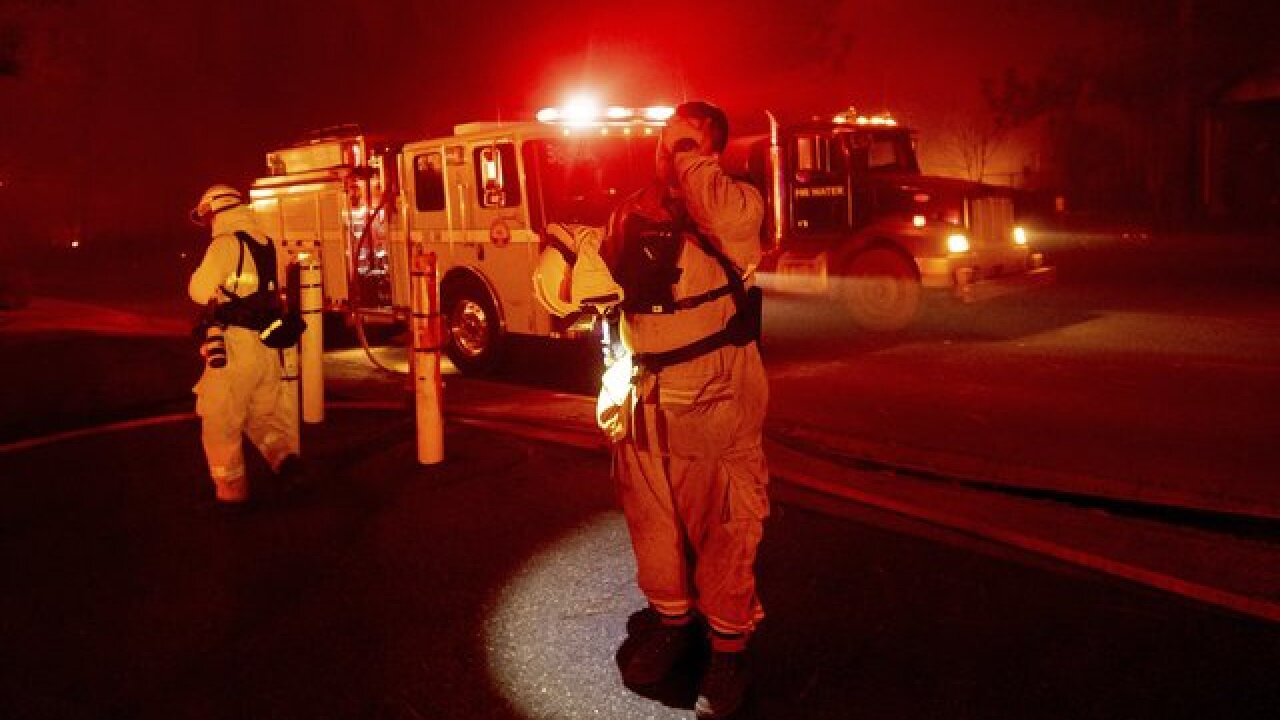 The Latest on California’s wildfires (all times local):

The director of the California Governor’s Office of Emergency Services says a fire in Northern California has claimed lives.

Mark Ghilarducci said Friday the number of deaths was not known. He said there are also injuries.

He says the magnitude of the destruction is unbelievable and heartbreaking.

The fire near the town of Paradise has grown to nearly 110 square miles (285 square kilometers).

Some people who escaped a roaring wildfire in northern California spent the night at a church in the nearby city of Chico.

Residents of the town of Paradise told harrowing tales Friday of a slow motion escape from a fire so close they could feel it inside their vehicles as they sat stuck in terrifying gridlock.

They say it was like the entire town of 27,000 residents decide to leave at once.

Fire surrounded the evacuation route and drivers panicked, some crashing and others abandoning their vehicles to try their luck on foot.

Many of the rural residents have propane tanks on their property and the tanks were exploding.

Resident Karen Auday says “they were going off like bombs.”

Authorities have issued an unhealthy air quality alert for parts of the San Francisco Bay Area as smoke from a massive wildfire drifts south, polluting the air.

Officials say the thousands of structures in the town of Paradise, 180 miles (290 kilometers) northeast of San Francisco, were destroyed by the blaze that has charred 110 square miles (285 square kilometers). At least 40,000 people have been displaced.

The air in San Francisco Friday is hazy and the smell of smoke is overwhelming, prompting officials to declare air quality unhealthy.

They are advising older people and children to move physical activities indoors.

All people are encouraged to limit their outdoor activities.

The city of Malibu has reduced the scope a mandatory evacuation order for the beachside community as a wildfire approaches.

Malibu officials initially said the order issued early Friday applied to the entire city but have now defined an area that is approximately the western two-thirds of the community.

The fire erupted Thursday northwest of Los Angeles and has been swept southward toward the ocean by strong Santa Ana winds.

A fire official says a Northern California wildfire has put 15,000 homes and 2,000 commercial buildings at “imminent danger of burning.”

Capt. Koby Johns of the California Department of Forestry and Fire Protection also said Friday that about 2,000 buildings have already been destroyed. He described those numbers as “very elastic.”

Johns says heavy winds continue to drive the fire but winds are expected to ease Friday afternoon, which could give firefighters an opportunity to start containing it.

Capt. Scott McLean of the California Department of Forestry and Fire Protection says the fire near the town of Paradise has grown to nearly 110 square miles (285 square kilometers).

A raging Southern California wildfire has triggered a mandatory evacuation order for the entire beachside city of Malibu.

The fire broke out Thursday northwest of Los Angeles and roared southward, jumping the U.S. 101 freeway early Friday and sweeping into the Santa Monica Mountains.

Malibu has about 13,000 residents and lies along 21 miles (34 kilometers) of coast at the southern foot of the mountain range.

The Los Angeles County Fire Department tweets that the fire is headed to the ocean, punctuating the message with the declaration: “Imminent threat!”

Officials in Northern California say a wildfire that devastated a town of 27,000 is moving north and have ordered people in two Sierra Nevada foothill communities to leave their homes.

The Butte County Sheriff’s Office says an evacuation ordered was issued Friday for the small communities of Stirling City and Inskip, north of Paradise, where thousands of homes were destroyed.

Cal Fire Capt. Bill Murphy says winds have calmed down in the valley but that there are “shifting, erratic winds” with speeds of up to 45 miles per hour (72 kph) along ridge tops.

The blaze that started Thursday morning east of Paradise and decimated the town also spread to the west.

It reached the edge of Chico, a city of 90,000 people Thursday night. Murphy says firefighters were able to stop the fire at the edge of the city, where evacuation orders remained in place.

To the west in Ventura County, Moorpark College is closed due to the impacts of fire and Wednesday night’s deadly mass shooting in nearby Thousand Oaks.

California Lutheran University had already canceled Friday classes due to the shooting. Cal Lutheran says its Thousand Oaks campus is not under evacuation orders but residential students have been put on standby.

Two wildfires raging west of Los Angeles have force thousands of people to leave their homes.

The Los Angeles and Ventura County fire departments say multiple buildings have been destroyed or damage, but exact numbers are not available early Friday.

The flames are being driven by Southern California’s notorious Santa Ana winds, which blow from the northeast toward the coast.

Both fires erupted Thursday afternoon and have grown rapidly.

One fire that broke out near the northeast corner of Los Angeles has roared westward, jumped U.S. 101 in the Calabasas area and is surging up the Santa Monica Mountains.

Evacuations have been ordered on the edges of the Northern California city of Chico, which is about 15 miles (24 kilometers) from a town where thousands of buildings were destroyed by a fast-moving wildfire.

Capt. Scott McLean of the California Department of Forestry and Fire Protection says flames from the blaze that devastated the town of Paradise had reached the eastern side of Chico, a city of about 90,000 people.

Authorities have said that at least two firefighters and multiple residents were injured in Paradise. McLean said Friday morning that he had no immediate update on injuries.

He says strong winds made it difficult for aircraft to drop retardant effectively on the fire.

A fast-moving wildfire that ravaged a Northern California town Thursday sent residents racing to escape on roads that turned into tunnels of fire as thick smoke darkened the daytime sky.

A Cal Fire official said thousands of structures were destroyed.

Harrowing tales of escape and heroic rescues emerged from Paradise, where the entire community of 27,000 was ordered to evacuate. Witnesses reported seeing homes, supermarkets, businesses, restaurants, schools and a retirement home up in flames.

The fire was reported shortly after daybreak in a rural area. By nightfall, it had consumed more than 28 square miles and was raging out of control.