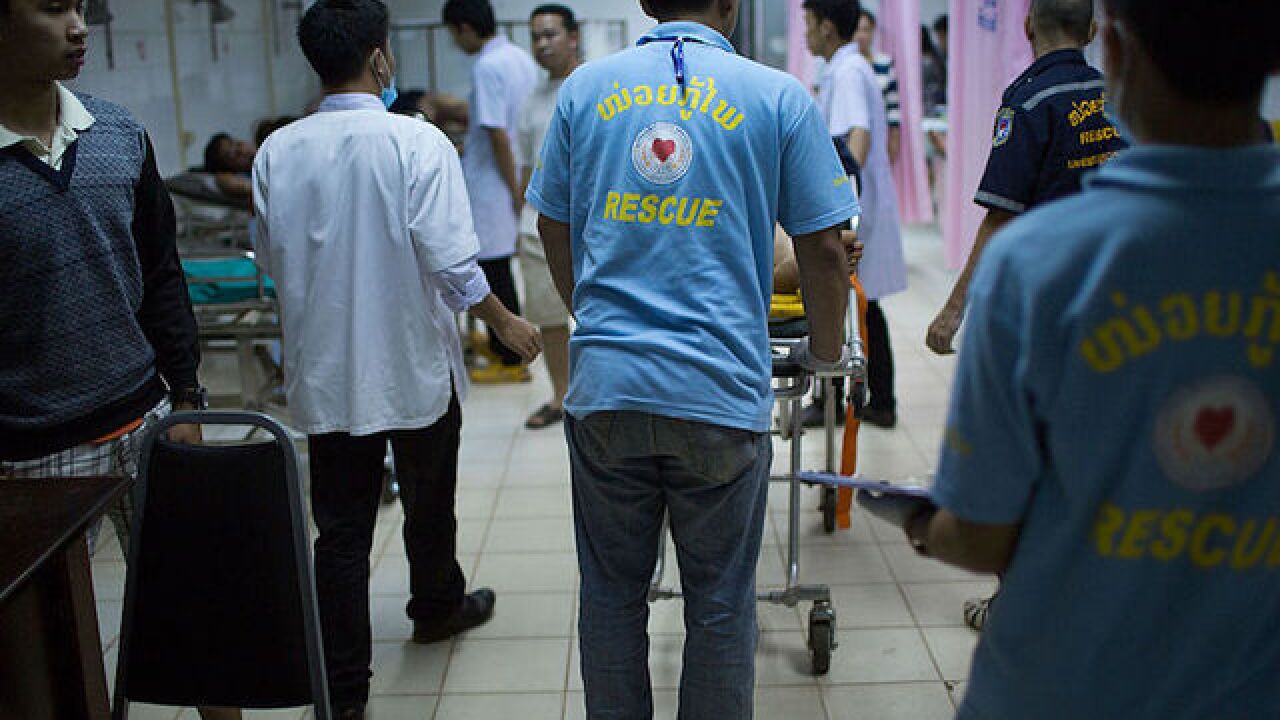 More than 10,000 people have been affected by a catastrophic dam collapse in southern Laos, according to figures published by the United Nations.

An unknown number of houses were washed away in the torrent, with aerial images of the aftermath showing what appear to be entire villages submerged by muddy brown water. Survivors could be seen clinging onto rooftops, while others paddled through the flooded areas on makeshift rafts and boats.

Nineteen bodies have been discovered by authorities and more than 1,300 houses found damaged, as rescuers descend on Sanamxay district, in Laos' Attapeu Province, according to state-news agencies.

Exactly how many people have been affected remains unclear.

A Laos government official told CNN that he expects the water level to decrease in the coming days and that people will be able to return to their villages.

In some areas, the water levels have decreased and people can now pass in their vehicles, according to the official. The rescue is still ongoing and survivors are being relocated to the highest building in the area.

The Xepian Xe Nam Noy dam, a billion dollar hydro-power project part financed by South Korea, was still under construction when the breach occurred at around 8 p.m. on Monday night.

The collapse of the dam, which occurred suddenly and without warning, unleashed approximately five billion cubic meters of water -- equivalent to two million Olympic-size swimming pools -- onto the surrounding countryside, according to state news agencies.

Laos is considered one of the world's least developed countries. Attapeu Province, which is located close to the Cambodian border, is home to an estimated 140,000 people, with many living close to the river system which feeds into the failed dam.

The Office of the UN Resident Coordinator in Laos reported that up to 11,777 were affected by the dam collapse, with up to 6,000 people displaced.

Authorities have made a public appeal for emergency aid for the victims of the flooding, including clothing, food, water and medicine.

The disaster is so far known to have affected at least six villages in the Sanamxay district of Attapeu province. Laos authorities have not given any official information yet about how badly the dam has been damaged, what caused it to break or when the flooding is expected to recede.

Ratchaburi Electricity Generating Holding Public Company Limited, one of the dam's four shareholders, said the incident was caused by the "continuous rainstorm which caused high volume of water to flow into the Project's reservoir."

The dam project was 90 percent completed and schedule to start commercial operations next year, Ratchaburi said.

The company announced Wednesday it would provide about $40,000 for relief efforts and that its high-level executive had traveled to Laos for further support.

The failed dam, which is part of a series of dams, was intended to generate hydro-electric power.

Hydropower energy and electricity generation are two of the major industries in Attapeu, according to the Laotian government.

The incident has shone a light on the development of the Mekong River Delta region, and aid groups like US-based International Rivers are warning that the dam collapse should serve as a warning for future development.

"Communities were not given sufficient advanced warning to ensure their safety and that of their families. This event raises major questions about dam standards and dam safety in Laos, including their appropriateness to deal with weather conditions and risks," the group said in a news release.

The push to build dams throughout the Mekong River Delta has been fraught with controversy.

While dam proponents argue they will help bring renewable electricity to a poorly developed corner of the world, the long-term changes to the environment and ecosystem -- especially fisheries -- have proved controversial.

"The Mekong Basin's fisheries are a vital resource, providing food security and livelihoods for millions of people, many of whom have limited opportunities to increase their food production or income," said a report published by the Mekong River Commission in December 2017.

Construction on the dam began in February 2013. It was due to cost an estimated $1.02 billion. Four companies were in charge of the venture: Ratchaburi, Korea Western Power Co., Ltd., SK Engineering & Construction Co., Ltd and Lao Holding State Enterprise, a state-owned firm, according to the a website that appears to belong to the consortium building the dam.

The site said that the project is expected to produce 1,879 gigawatt-hours of electricity a year, 90 percent of which was supposed to be exported to Thailand. The rest was to be sold to the local grid.

SK Engineering & Construction Co, which is building the dam, has dispatched a rescue crew including helicopters and boats to Laos, South Korea's Ministry of Foreign Affairs said in a statement Tuesday.

According to the ministry, 53 Koreans who were working at the site have been evacuated.