Huge power outage leaves most of Venezuela in darkness 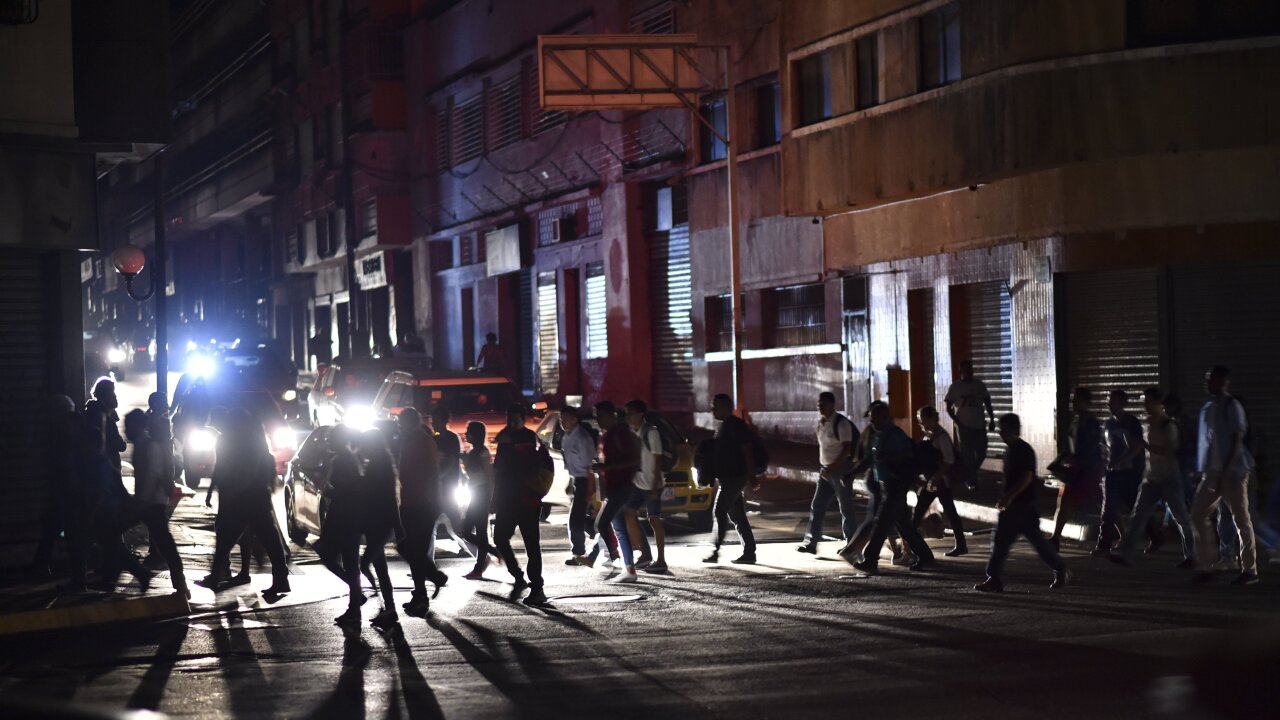 Most of Venezuela still had no power Friday evening, more than 20 hours after a massive outage left over 70% of the country without electricity.

The blackout stopped mass transit in the capital of Caracas, shuttering businesses and gas stations.

State broadcaster VTV reported Friday that some power had been restored but provided no specific numbers or locations.

He alleged, without offering evidence, that the attack took place at Venezuela's main hydroelectric power station in Guri in the southern state of Bolivar, which provides about 70% of the country's energy.

"People generally wait until service is re-established. So, this verifies and confirms that this was pre-planned," the minister added.

A former electricity executive at Venezuela's National Electric Corp. told CNN that the outage at the power station was most likely the result of old equipment and bad maintenance.

"That damage happened because the machines are old," Miguel Lara said. "There are not any spare parts or enough people to upgrade the system."

Blackouts have become a daily occurrence across Venezuela as the economic crisis has worsened, but one of this magnitude is rare.

Rampant inflation and food scarcity have gripped the country under embattled President Nicolas Maduro, and thousands have fled to neighboring countries as shortages, political turmoil and crime rates have soared.

Reuters reported local media as saying this outage affected the capital, Caracas, as well as at least 15 of the country's 23 states.

Vanessa Suarez, from Ureña, said she and her family still have no water and electricity.

"There is no power, no water, nothing. We are here to ask for diapers and food because there's nothing there," Suarez said.

Critics of Venezuela's government blame corruption and underinvestment, with opposition leader Juan Guaido -- who declared himself the country's acting president in January -- describing the blackout as further proof that time is almost up for Maduro.

"Venezuela knows that the light will arrive with the end of the usurpation," Guaido tweeted.

Just over an hour later, Maduro posted on Twitter : "The electric war announced and led by the American imperialism against our people will be defeated. Nothing and no one can beat the people of Bolivar and Chavez. Maximum unity of the Patriots!"

US Secretary of State Mike Pompeo hit back at Maduro, blaming him for the situation.

"The power outage and the devastation hurting ordinary Venezuelans is not because of the USA. It's not because of Colombia. It's not Ecuador or Brazil, Europe or anywhere else. Power shortages and starvation are the result of the Maduro regime's incompetence," Pompeo tweeted.

"Maduro's policies bring nothing but darkness," he added in a separate message.

Then he tweeted, "No food. No medicine. Now, no power. Next, no Maduro."