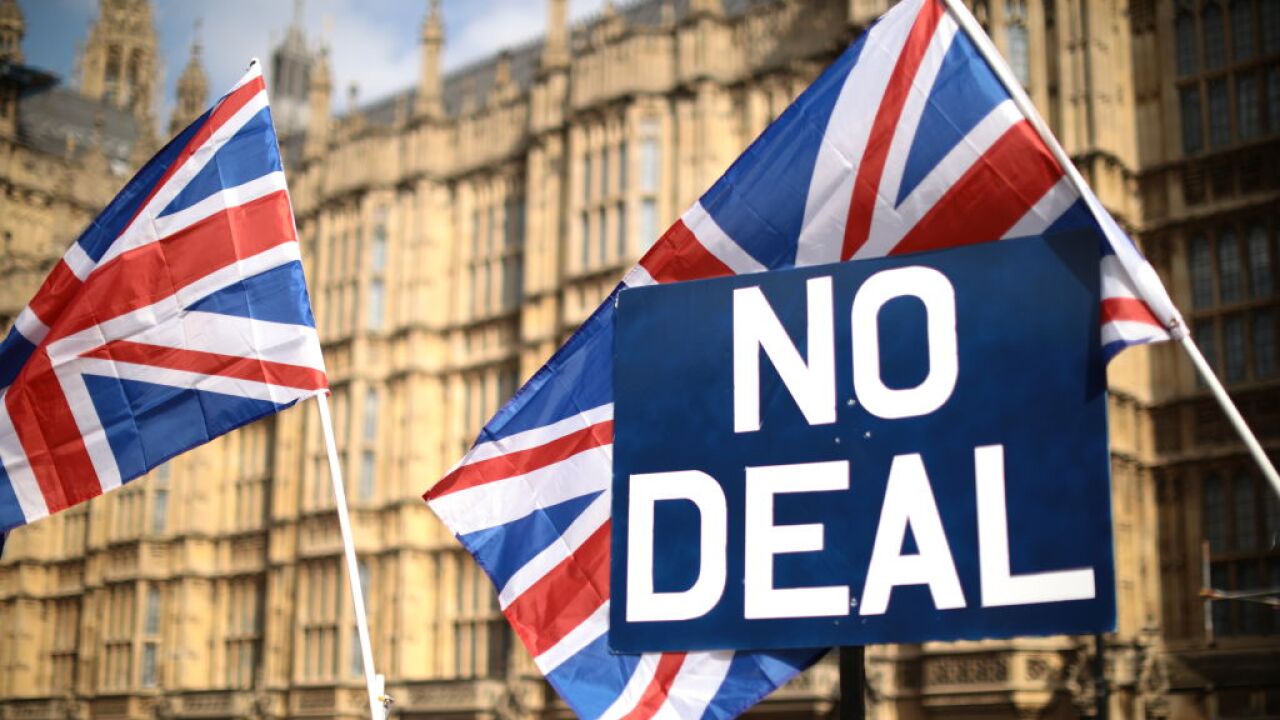 British Prime Minister Theresa May is expected to bring her EU withdrawal bill back to Parliament for a fourth vote, according to reports in UK media.

Downing Street refused to comment on the prospects of a fourth vote when contacted by CNN, but Conservative Party Chairman Brandon Lewis did not rule out the possibility in an interview on BBC Radio 4's Today program on Saturday.

Lewis said MPs must consider possible next steps given that the updated Brexit deadline of April 12 is approaching.

"Parliament will continue this process on Monday and we need to look at all the options," he said.

May's proposals have already been voted down three times in a bitterly divided Parliament, although the scale of each defeat has been falling.

Friday marked the latest loss, by a margin of 58 votes, as the Brexit saga rumbles on amid a deepening political crisis.

In a statement directly after her deal was defeated, May indicated that the parliamentary process was running out of road.

"I fear we are reaching the limits of this process in this House," she said.

However she indicated that the government would allow the process of "indicative votes" -- outside the control of ministers -- to continue next week.

The idea of a fourth vote has caused outrage in some quarters, including The Guardian .

The newspaper claimed that a fourth vote would be "madness" and proposed that the deal should be subject to a "three strikes and out" rule.

"The reality is that Britain now faces a choice between a no-deal exit in two weeks' time or a much longer delay to Brexit, during which the UK will probably take part in the EU elections," the paper said.

"Since the former is unthinkably dangerous, the choice must clearly be for a longer delay."

On the other hand, The Sun said MPs who voted against the deal had "betrayed Brexit."

"It was sickening to watch MPs whoop and snigger after voting to thwart the biggest democratic mandate in our history and continue this terrifying, damaging chaos," the paper said.

"Instead of being out, MPs have contrived to put Britain's fate in EU hands... That is down to the abject failure and contemptible dishonesty of the worst crop of politicians of our lifetimes."

"On day we should have left EU. Corbyn conspires with hard Brexiteers to block deal AGAIN, plunging Britain into chaos... and a looming general election," continued the front page.

And pro-Brexit demonstrations around the Houses of Parliament in central London on Friday resulted in five arrests, as several groups of protesters converged, on the day that the UK was originally meant to leave the European Union.

Marchers carried placards, bearing slogans including "No deal is better than a bad deal," "Every nation has the right to self-determination" and "Leave means Leave."

Others chanted, "This country has turned into a dictatorship" and "we want our Brexit back."

The demonstration followed on from an anti-Brexit protest that drew hundreds of thousands of attendees last Saturday.

May will spend this weekend trying to plot a way out of the UK's Brexit stalemate, but with just two weeks left to the new deadline, she -- and the House of Commons -- are running out of options, Jane Merrick argued in a piece for CNN .

A possible fourth attempt to persuade lawmakers to back her deal could be set against a softer version of Brexit in order to force an affirmative decision one way or the other, Merrick said. With the numbers deadlocked, and little sign that May can turn defeat into victory, one solution could be a fresh UK general election.

May called a snap general election two years ago and ended up losing her Conservative majority.

To hold another one would represent a big risk, but bookmakers Betfair say an election before Brexit takes place is odds on.

There has also been talk of implementing a government of national unity, but Lewis rejected the idea.

"A national government is not the answer," he told the BBC. "It doesn't change the parliamentary maths and MPs when they've voted consistently haven't been able to come to a conclusion on anything."