California counties say they making progress with testing ahead of reopening 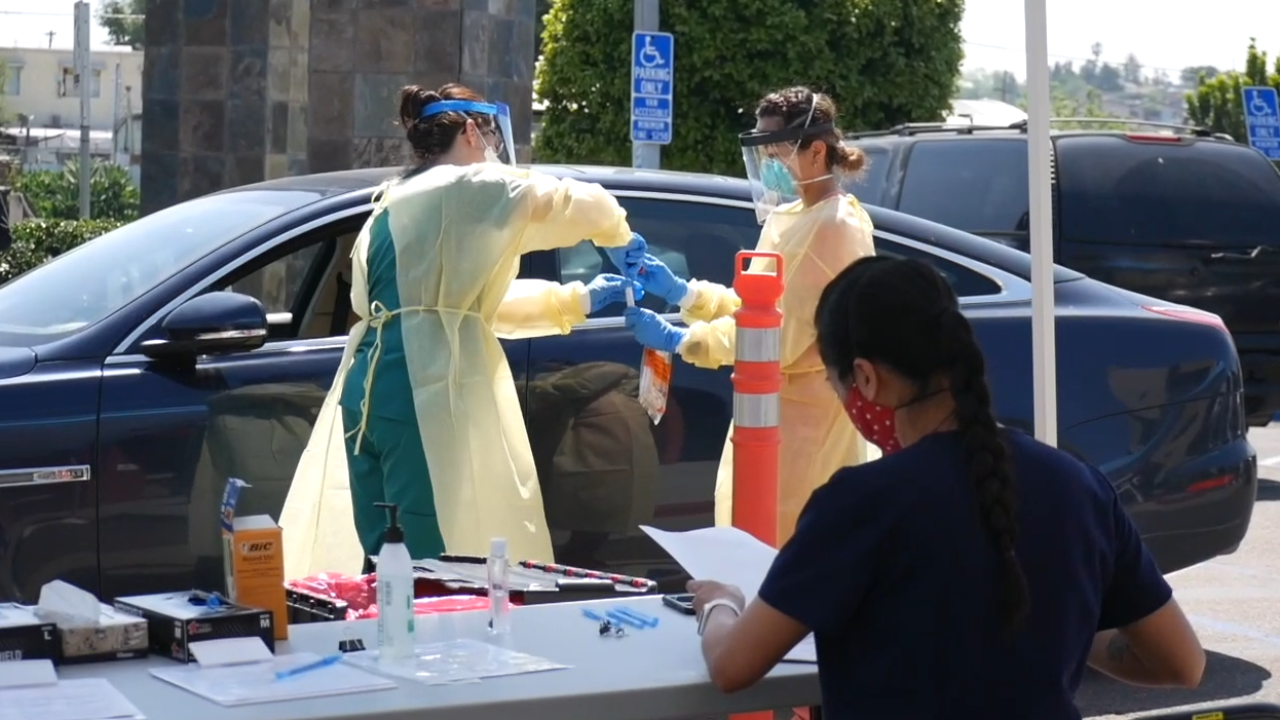 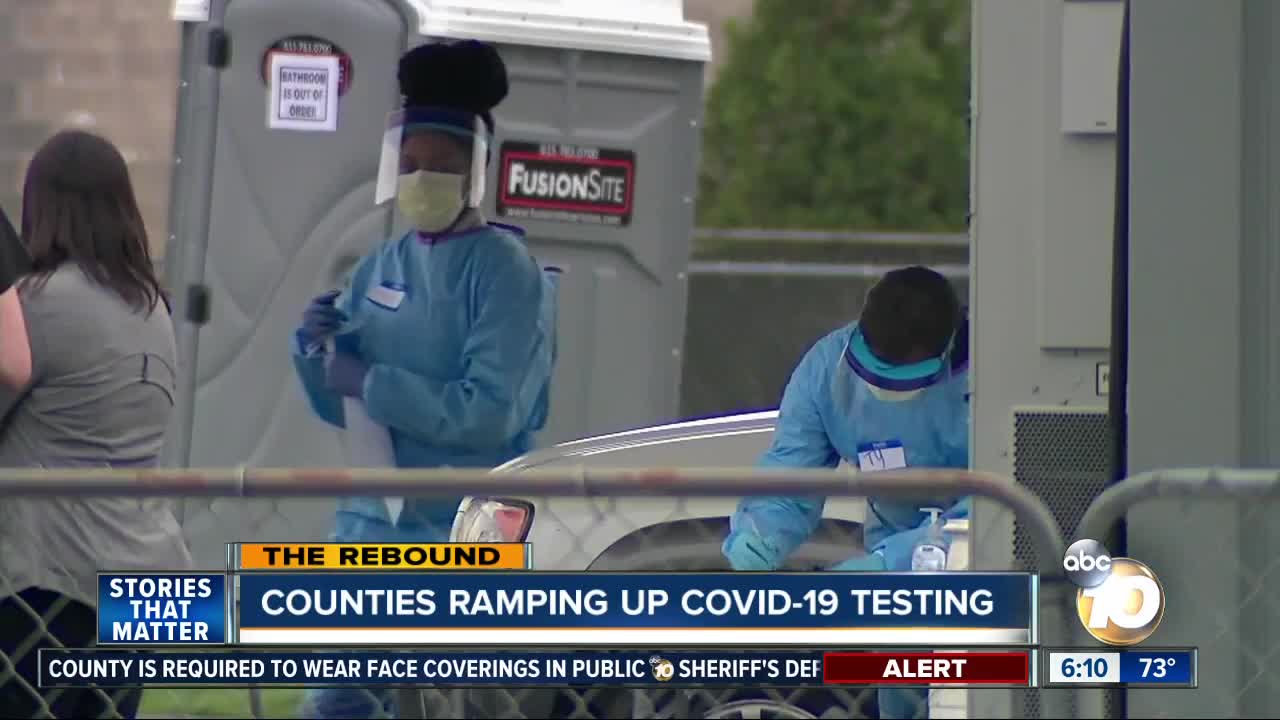 SAN DIEGO (KGTV) -- On Friday, counties across California will slowly start to reopen. As the state heads down this road to recovery, does it have the testing capacity to ensure counties can open safely?

"My wife, she has a low immune system, so I figured I could get tested and stop putting her in danger," said San Diego County resident Daniel Vecerra.

Daniel Vecerra's been battling a cough for a few days. This week new testing sites opened, allowing Vecerra to get information that will help protect his family.

"It's something that I have to get tested for," he said.

Across the state, similar types of testing sites are popping up. Ones that are state-sponsored and others with help from nonprofits. All equally important to providing the information needed to help reopen California.

"Testing, tracing we tend to use those hand in hand," said Gov. Gavin Newsom at a press briefing earlier this week. "Testing has really taken off. We're now averaging over 30,000 tests a day."

At the press briefing, Newsom said, "The testing is simply scaling where we'd hoped it would be."

On Wednesday, the state of California launched an interactive website to help Californians find COVID-19 community testing sites near them.

"As testing continues to ramp up at a rapid pace across the state, we want to make sure Californians know how to schedule an appointment, which can easily be done online for many locations," said Dr. Charity Dean, assistant director of the California Department of Public Health and co-chair of the California COVID-19 Testing Task Force.

"With the launch of new community testing sites and significantly expanded testing criteria, more Californians will be tested – and in locations much closer to their homes," Dean said.

With more resources being added weekly, ABC 10News San Diego checked in with several counties to see where they stand with testing.

"We are absolutely where we need to be as far as testing," said Paige Baton, Santa Barbara County Deputy Director for Community Health.

San Luis Obispo County officials said it's generally accepted that counties should be testing approximately 152 people per day per 100,000 population.

A county spokesperson said, "We are currently capable of testing approximately 365 people per day with the two testing sites stood up at the beginning of this week and with PH Lab testing capacity. We have further plans to initiate additional testing in the coming weeks. This does not include testing already underway at local primary care providers and urgent care centers, so all told, we feel we are well on our way to being able to test enough to meet the generally accepted goal."

The spokesperson said the San Luis Obispo County population estimate is about 284,000 people. That means they would need to do approximately 432 tests per day to meet the "Harvard Standard."

At a press conference on Monday, the San Luis Obispo County Health Officer explained the county's testing goals and timeline.

"So the question, it appears that maybe 2% of our residents have been tested to-date and what is our goal and how quickly do we expect to get there? So there are a couple of metrics that are available in terms of recommendations for the amount of testing we should be doing. The one that we referenced in our START guide came out of Harvard University, Harvard Global Institute, a study that said we should be doing on the order of 150,000 roughly per 100,000 population. In our supplemental, our status report in the START guide, we talk about potentially getting there or close to there within the next three weeks and that, we think, will put us in good stead. That was just one study. We're now hearing from the state numbers of what they expect to see in terms of our testing capacity that's considerably lower than that and we think, given with this additional testing that we've been doing, we probably have already achieved that. Two percent of the population puts us at 5,000-ish already being tested, and that is, yeah, probably close to the accurate number," said Dr. Penny Borenstein.

In San Diego County, leaders said they are on their way to the goal.

When asked about Testing, San Diego County Supervisor Nathan Fletcher said, "5,200 tests is just a regional goal that's based on the Harvard study and some other things that have come out. 152 tests per hundred thousand residents and we would like to get that and continue to grow beyond that."

A spokesperson for Kern County Public Health Services Department said, "Kern County has three sites open currently, in addition to testing available in doctor's offices, hospitals, and urgent care facilities. There will be four additional sites going live in the next week throughout the county. In addition, there are potentially four more sites being investigated now. If all the possible locations go live, that would give Kern County 11 testing sites."

When asked how many tests are being performed in the county each day and the county's goal, the spokesperson responded, "The goal is to remove the barriers to testing and make facilities available in the communities that need them in a manner that makes sense for the residents. We're focused on access, and we're letting real-time results dictate the need rather than set an arbitrary goal."

Where each county stands could impact others as life rebounds.

While when to reopen will be worked out between the state and counties and a series of metrics beyond testing, we went straight to the Harvard Global Health Institute to understand the logic behind their numbers on testing.

"That number is helpful to think of on average across states or across counties," said Dr. Thomas Tsai, a health policy researcher at the Harvard T.H. Chan School of Public Health.

"I think in some ways that's a bare minimum. The reason for that is, as we move to open up our economy and open up our society we may actually have a need for more and not less testing. Right now we've been focused on testing just those with symptoms, and those in hospitals, and those in ICU's. When we move to lifting some of these social distancing orders we actually need to move to a strategy of surveillance and contact tracing," Tsai said.

Tsai said if you don't have enough tests, you can't have a strategy and will be playing catch up.

"California has done really well, and I think it is a shining example of a state that has been proactive in using data to guide their decisions," Tsai said. "What's been encouraging is that California and Governor Newsom has had an actual transparent scorecard, which he is using to guide how California's moving from phase to phase."

Dr. Tsai said while each county is different and diverse strategies are needed, it's essential to know where each stands on the amount of testing being conducted.

"I think the need for tests are actually going to increase not decrease, and we need those tests to be the early warning system to identify individual cases."