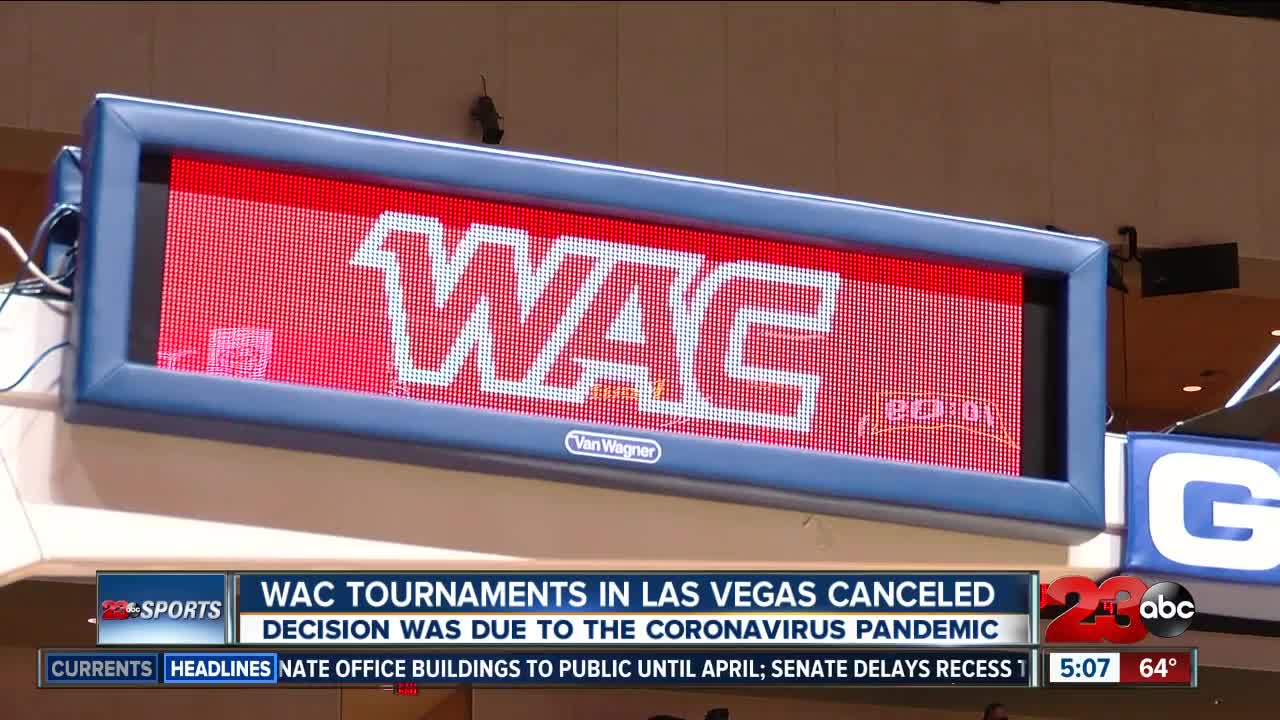 LAS VEGAS, Nevada — A tough all around day for athletes from around Kern County and around the country as officials canceled championships and tournaments due to the coronavirus pandemic, including the Cal State Bakersfield's basketball teams runs in the Western Athletic Conference.

The WAC announced their decision to cancel the tournament at 9 a.m. and later that day, the NCAA announced their were canceling the NCAA basketball tournament. For the 'Runners, this was their last opportunity to compete for a WAC title as they are moving to the Big West Conference next season. WAC Commissioner Jeff Hurd recognized the heartbreak for them and the other teams following that decision.

"I understand the disappointment," Hurd said. "There are fans, there are student athletes and coaches who are upset by the fact that season ended the way it did. At the same time, you have to put it in perspective. What's more important? And, in my mind and in our minds as a conference I think we would be negligent if we did not take safety into account first."

Hurd also confirmed that there was a player who was tested for coronavirus but those results came back negative. The player or their team was not confirmed.

"We gathered as much information as we could possibly gather made the decision based on what we knew at the time and decided it wasn't worth taking any kind of a gamble or a chance on playing a game and put people at risk," Hurd said.

For the fans and families traveling to Vegas for the tournament there are mixed emotions with some understanding.

"My daughter Dalis being a senior she was just so ready. So just a little unsettling, but I do understand the concern concerned as a mom so I get it," Alesia Jones, mother to senior guard Dalis Jones, said.

While other attending the tournament for the fun of watching their teams played also weighed in on the situation.

"Just kind of disappointing because there's some really good basketball going on during that time," Bakersfield resident Dottina Dixon said. "I just hope that people could get at least some of their money back if they can't get it all of it."

Deliliah Armendariz, who traveled with her family from Austin, Texas to cheer on the New Mexico State Aggies also had some concerns although keeping a positive attitude about the issue.

"We are disappointed because we came a long way and we've been excited about the tournament but you know, we understand it happens they have to take precautions and we're going to kind of just roll with it," Armendariz said.

No high school state championships. No March Madness as the coronavirus continues to have a widespread impact on the sports world. While schools from high schools to college have decided to suspend spring sports for the time being as well, meaning we all could be without sporting events for the foreseeable future.