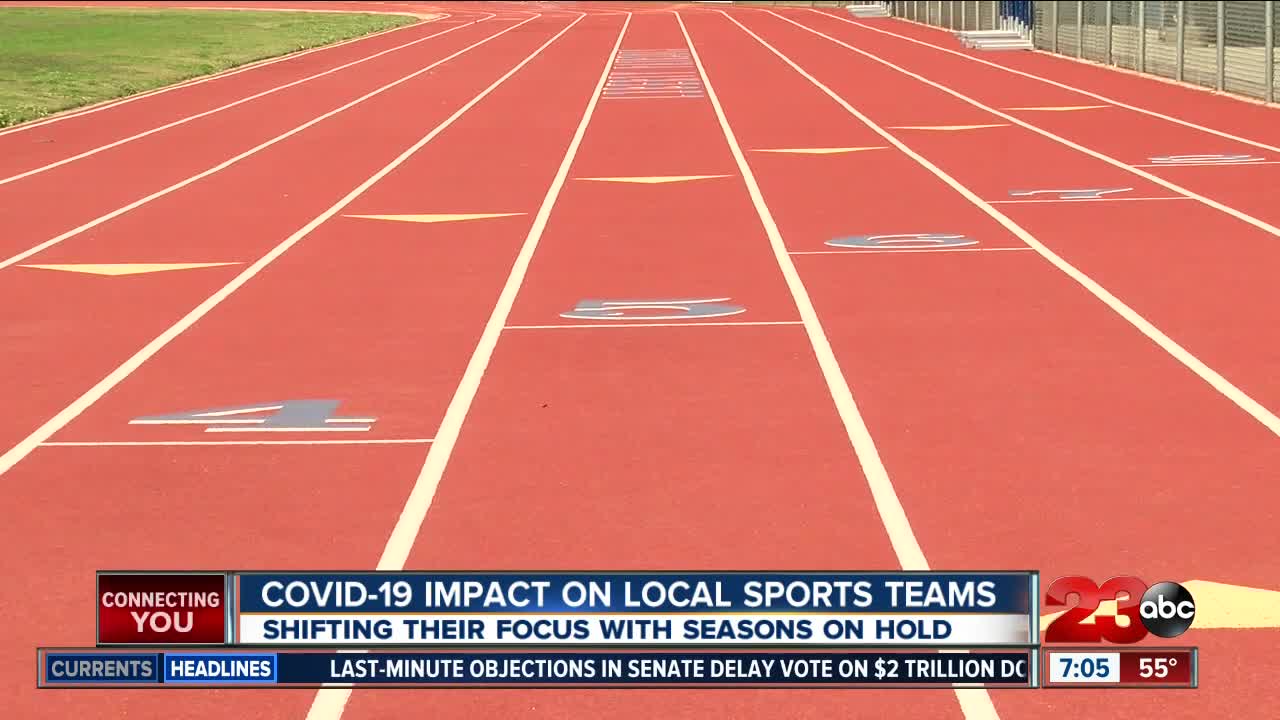 BAKERSFIELD, Calif. — While sports have been put on pause across the world, Kern County sports teams have had to adjust at different paces yet have had to deal with similar issues, starting with Liberty High School track and field team.

The Patriots were poised to finish top in the state and go for their seventh straight league championship.

“We've been working for eight, nine weeks at that point. And now we get to see some of the fruits of our labor, how they're going to mature and what they're going to do over the next nine weeks. And that's what we're missing the funnest part of the seasons is what we’re missing," Liberty head coach Ryan Renz said.

Now, that season is on hold until the CIF comes out with information on April 3 with a decision if the spring sports around the county will be able to continue.

“I hope that we are able to come back this year and run. But if it doesn't happen, then, you know, like the work we put in, it's like we still put in the work and it's still valuable and it's not wasted," Palmgren said.

“We have some highly motivated kids, they can keep working out and understand hopefully there's light at the end of the tunnel. Whether whenever that light is at this point," Renz said.

At Bakersfield College, the Renegades saw their seasons come to an official end late last week per ruling by the CCCAA.

“I'm used to this time of year, you know, being surrounded by my athletes and our staff and all that kind of stuff. So it's definitely different. It's not easy, it's hard," Bakersfield College Softball Coach Casey Goodman said. "It's hard not being able to you know, see your kids and keep working with them and keep working towards another conference championship, but that's the really that's the smallest of things when we look at what's really going on, you know, in our country and even now in our state.”

Across town at Cal State Bakersfield, a Division I program, those teams were the first to be suspended along with many NCAA programs across the country. For the swim team, their season was canceled at the National Invitational in Cleveland.

“We were swimming faster than we did at the WAC championships and we were pretty stoked, went back to the hotel to rest and we woke up to the news that we will some finals, but then we're done," CSUB director of swim Chris Hansen said.

Six Roadrunner swimmers will also put their Olympic hopes on pause after learning that the Tokyo Summer Games were officially postponed until next year.

“We had a great season and when we broke 12 school records and we had some wack champions so now we've had some obstacles, but I've been impressed with how they're handling it," Hansen said. “And we're just gonna sit back and keep doing what we're doing and hopefully we'll be in Tokyo when, whenever it is."

Then there are other athletes like Mira Monte's Emily Hernandez who has not been able to play with her club volleyball team, yet she's grateful to have recently signed with Sonoma State to continue her career.

“Just a good feeling to know that like, I'm going to be able to live my dreams, like out of my high school experience, especially my senior year like the home games, volleyball, they were like so high and all this and now it's like, I'm gonna be able to do that for like four more years coming up and it's the best," Hernandez said.

But not every senior like Hernandez and Palmgren will have something to look forward to beyond their high school seasons.

“This is probably it for a lot of them. So it's a memory lost," Renz said.

“It’s made me sad a little bit for those who weren’t planning on running next year. Even if they aren’t going to keep running you still have that experience and have something that you worked hard for and you can take that into other things in your life," Palmgren said.

Now, it's time to focus on those positives while shifting their goals as on one team.

“This is not about sports this point. This is about our country, our world and keeping people safe," Renz said.