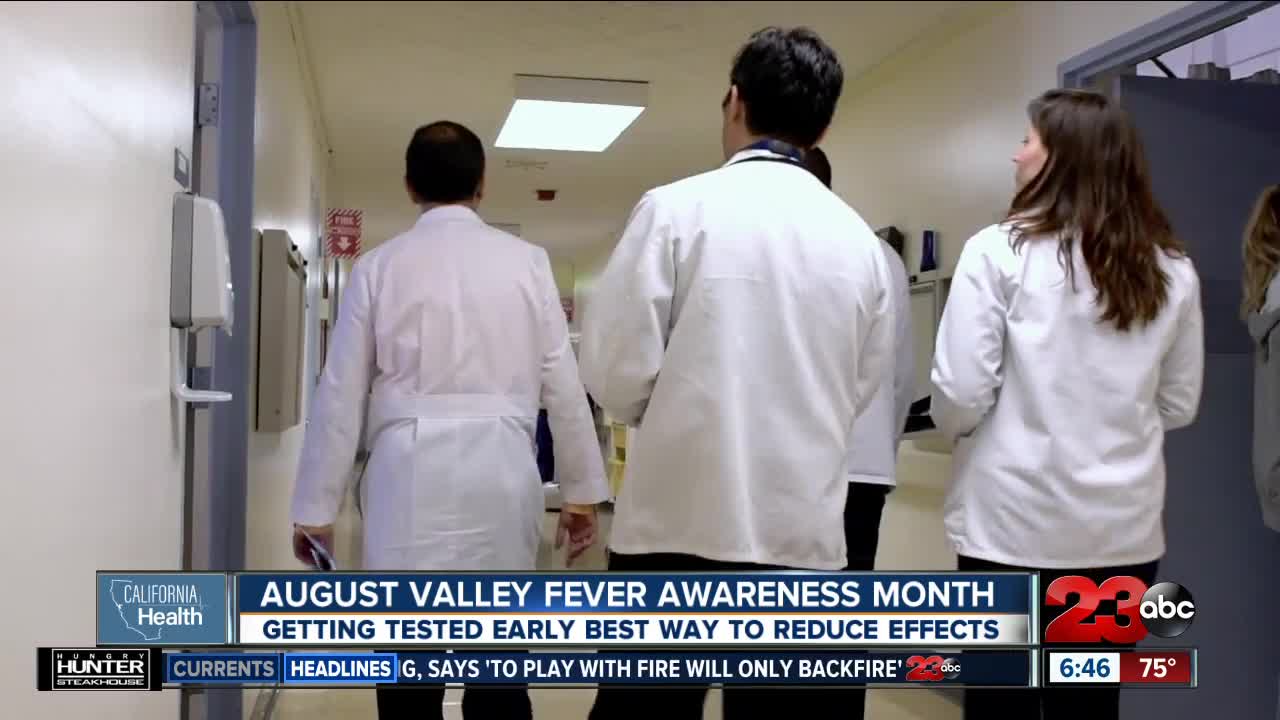 August is Valley Fever Awareness Month. In the last 10 years the fungal infection has killed 150 people in Kern County. Kern Medical Center staff said the best way to reduce the effects of Valley Fever is to get tested early.

The Valley Fever Institute said Valley Fever is a fungal infection found mostly in the western United States. And since its symptoms can be similar to other more common illnesses, getting yourself checked early can help reduce your risks of the infection.

Ashley Villegas is from Bakersfield and she said she has Valley Fever. “I do have to be at my treatments every two weeks. So I have every Friday off from work so I am able to go to my treatment.”

Villegas is a medical intern at Kern Medical Center. She hopes to be an ultrasound technician this fall. In 2016 she said she got sick while she was 32 weeks pregnant.

“I kept having these ongoing fevers that wouldn’t go away,” said Villegas, “like 104 migraines.”

Villegas said after a couple of misdiagnoses her mom took her to Kern Medical Center.

“But by that time I was already hallucinating,” said Villegas. “I had so much fluid in my brain. I was like speaking my own language. And then I got here and they had no idea what I had.”

Eventually doctors diagnosed Villegas with Valley Fever. However, she had a serve case that put her pregnancy and her own life in jeopardy. She said, “They induced me because like at that point I was on my death bed and they needed to start treating me for the Valley Fever or else I was going to die.”

Doctor Royce Johnson is the medical director at the Valley Fever Institute. He said 60% of the people who get the infection have no symptoms, 24% of people get diagnosed and only 1% of people get an illness like Villegas. And he said right now they are not sure the exact reason for the wide variance of illness from infection.

“Our hypothesis is that this is based on different genetics of the immune system in different people,” said Dr. Johnson.

He continued to say Valley Fever is tough to diagnosis without tests because it has similar symptoms as the flu and pneumonia.

“So being tested, if you have symptoms, particularly that go beyond ten days,” said Dr. Johnson. “Getting a chest x-ray and a Valley Fever blood test if you live in or have visited the endemic area, which is the whole southwest of the United States.”

Rob Purdie is the program coordinator at the Valley Fever Institute. He, like Villegas, also has a chronic version of Valley Fever. He said getting everyone with symptoms tested helps they figure out that variance of the infection.

“Until we can tell who’s who and how severe you’re going to get it,” said Purdie, “we have to worry about everyone that gets it could be a severe cases.”

That Valley Fever Awareness Walk will be held that the Kern County Museum Saturday August 10th. To register Purdie said to go online to the Valley Fever Walk 2019 Facebook page.

Here in Kern County in the last 10 years the Valley Fever Institute stated about 150 people have died from Valley Fever. And most of the diagnoses of Valley Fever happens between August through December. Dr. Johnson said while there’s no easy way to protect yourself from valley fever, he thinks one profession is more at risk than others.

“Oilfield workers work on oil wells that are basically in the middle of undisturbed soil," said Dr. Johnson. "And that’s where [coccidioides] lives.

The big take away people like Ashley Villegas want from the walk is for people to take Valley Fever more serious and be more aware of its effects.

“Most of the times I feel like people could have it, but it’s just not as severe," said Villegas. "So I definitely think that if you’re getting any sort of symptoms definitely get checked for Valley Fever so it doesn’t get as severe as what I got it.”