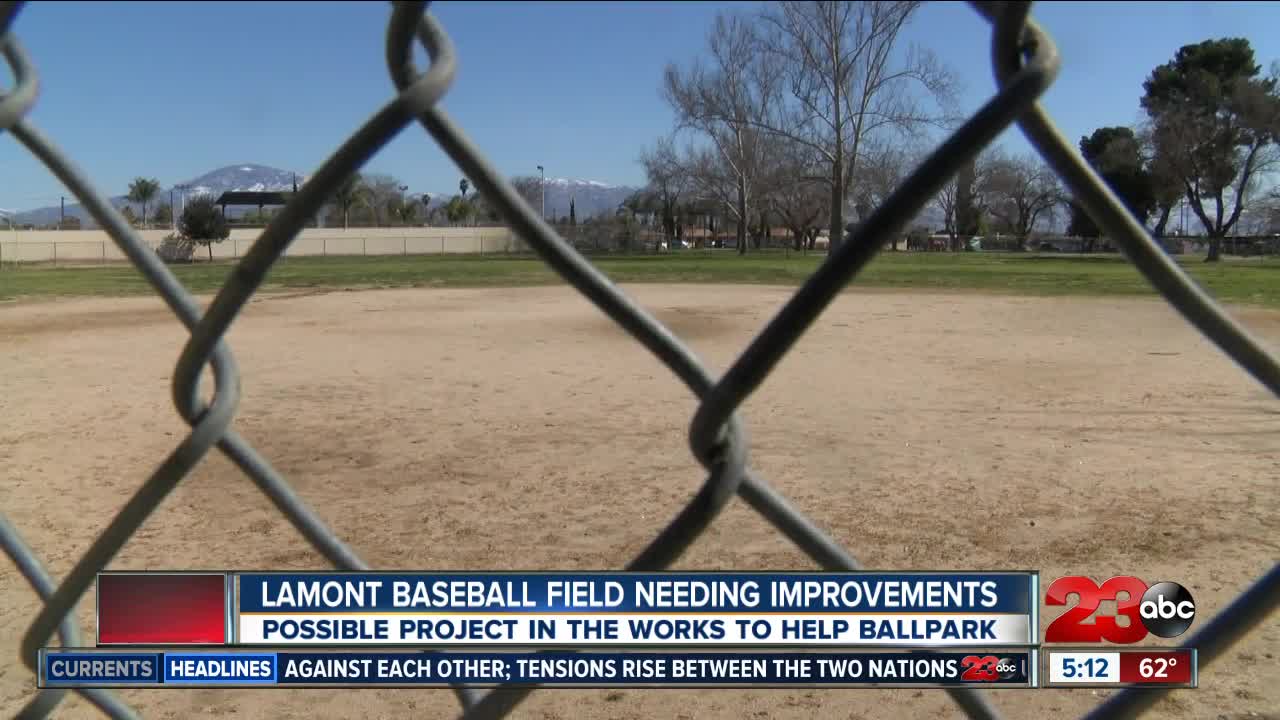 A baseball field in Lamont is damaged and hasn't been used in 10-15 years. Now the community is trying to fix it and play ball again.

LAMONT, Calif. — Baseball season is right around the corner, but not for a local baseball field in Lamont. The field’s condition is preventing teams from playing our National Pastime. Now the community is trying to get back in the batter’s box and fix it.

Currently there are not any game-winning hits at the plate, no web gems in the field and no all-stars under the lights. The baseball field at Lamont Park is little more than a place to walk across to get to another part of the park.

Sergio Sabalza grew up in Lamont playing baseball at Lamont Park. When asked about the baseball field and snack bar he said, “Right now I feel kind of sad because I bring my daughter and the first thing I see is wooden boards on that. You know I would like to have, have that field open. You know snacks for the kids. Having everything running great like before.”

Sabalza said he has fond memories of playing second base and center field at Lamont Park when he was younger.

And now that he’s older with a growing family he wishes he could watch his daughter create the same memories.

Sabalza said, “I’ll be having two kids in a couple more months. My little baby boy will be born in June. I would like both of my kids be playing sports.”

But baseball and softball games aren’t on the schedule in Lamont. Bases drawn into the dirt replace standard bags. The pitcher’s mound looks more like a pirate’s plank rather than a rubber to hurl from. The chain link fencing has holes in it. And no one can score because home plate is missing.

The Greater Lamont Chamber of Commerce president, Jose Gonzalez, said, “I know it’s uh, needs a lot more improvement than it’s been kept up. The last 15-20 years it really hasn’t been kept up as it should.”

Gonzalez said since the park is a county park they have limited ability to fix up the park. He said the field needs to be cleaned, broken glass picked up, gopher holes filled, snack bar restored and lights around the baseball field fixed or replaced.

“I think if they put in maybe a good hundred thousand dollars would probably make this field look spectacular. It would look great,” said Gonzalez.

The Greater Lamont Chamber of Commerce isn’t the only group that would like to see the baseball field fixed up. The Comite Progreso de Lamont has their own vision, but they also have a bigger dream than the chamber. Comite progreso de Lamont is looking to fix the baseball field, add 5 new soccer fields, repaint the basketball court in the colors of the nearby Lamont Elementary School, put in new fencing and trees and add new lighting for the park. Jose Mireles from Comite Progreso de Lamont said more soccer fields are a big need for Lamont.

“We have like close to 30 teams here in Lamont of soccer,” said Mireles. “And we have no place for them to come and play. So they either go to different fields in Bakersfield.”

Mireles said his organization met with county staff to try to get funding for the project. And they’re working on submitting a state grant to get a quarter of a million dollars for Lamont Park. Mireles said if they get funding they will try to stretch it with community support.

“If we start asking the community to see if they will help with whatever they know how to do or build, if they do it. Because it’s for our own kids, I think they can get it down for a lot cheaper and do more,” said Mireles.

If funding doesn’t come from a state grant, Gonzalez is hoping to get money from the county. He said they haven’t been successful to get funding specifically for the baseball field in years, despite getting funding for other Lamont Park projects like the shade over the playground. Now Gonzalez hopes with a newly districted 4th District county supervisor, David Couch, comes a supervisor who’ll help them play ball again.

When asked, Couch said the county is willing to work with Lamont to try to get the state bond money.

“Through the state and through Prop 68, there are portions of that we are trying to access grants from, about $1.62 million dollars,” said Couch. “For LED lighting, for artificial turf on the baseball field, for multi-use fields, more trees. It’s a big project and we’ll be applying for that grant. But that has not been done yet.”

Couch said he expects the application for the grant to be submitted in the next couple of months. And if Lamont Park is unsuccessful in getting the state grant, couch said there is a backup plan.

“If we don’t get that grant, the county would be in a position of maybe doing the exact same project, but doing it over multiple years. It’s just spending less money per year instead of doing it all at once out of the grant,” said Couch.

One concern with the fixing Lamont Park is whether it would fall back into disrepair. When asked Couch said it’s in the best interest of the county to maintain the park. While Gonzalez added, “I think we’ll have more eyes on this, including with the county and work with the county so that they maintain the field and discourage people from damaging the field.”

If Lamont Park gets it’s makeover, with new soccer field, baseball field cleaned up, lights turned back on and snack bar opened, local ballplayers like Sabalza said he and his daughter will look to make new baseball and softball memories with their family.

“Oh that would be great for me,” said Sabalza. “I would be proud of my daughter.”