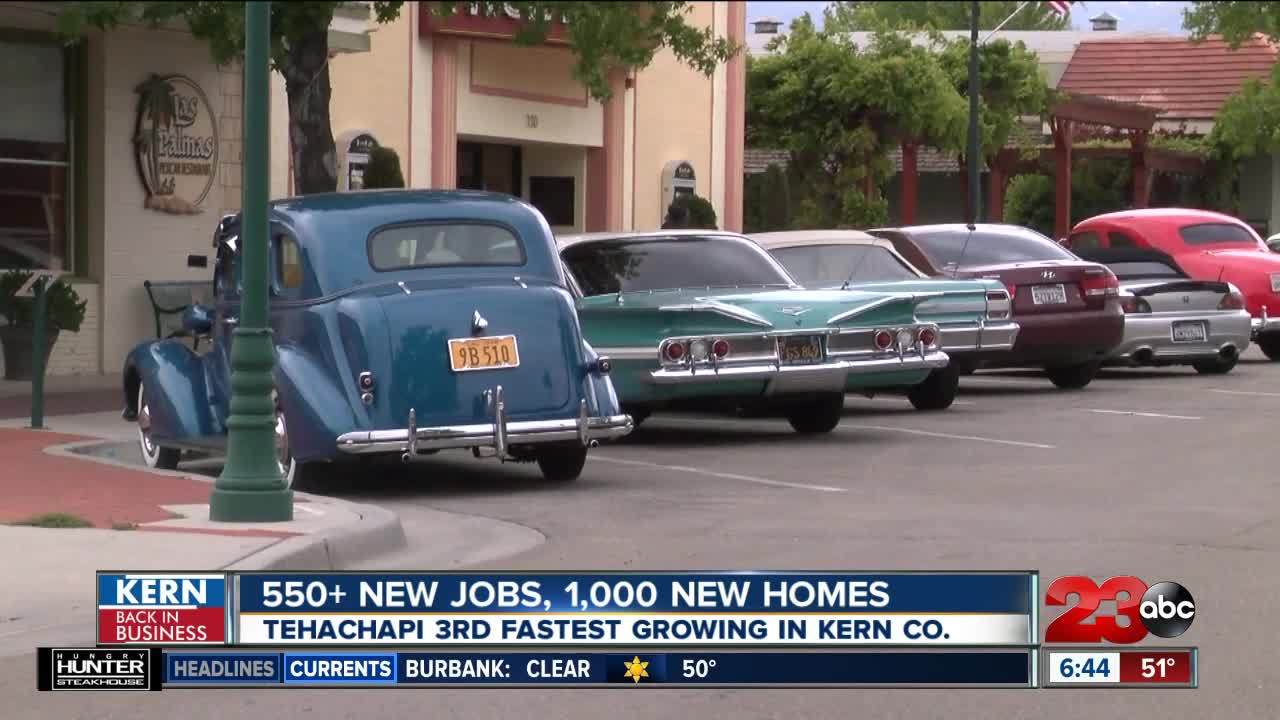 TEHACHAPI, Cali. — Tehachapi is growing, third fastest in Kern County in 2017. That’s according to the State Department of Finance. Two major industries are bringing hundreds of jobs with them to Tehachapi. And those jobs coupled with the quality of life has people being attracted to Tehachapi.

Nichole Hamblin and Mike Safford both recently moved to Tehachapi. These are some of the things they like about Tehachapi. Hamblin said, “I love the climate, the seasons that we get. But most importantly I love the people.” While Safford added, “The pace of life here and the rich sense of community that are present.”

Hamblin moved back to Tehachapi after her family lived in New Zealand. And Safford moved up from Orange County. Both said they had multiple places they could have moved too.

“Went and visited each of the places we had an opportunity to go," said Safford. "And after driving away from Tehachapi, literally we were driving back to Orange County from our first visit to Tehachapi, family just said to one another that just felt like home.”

Others like the Saffords and Hamblins are moving to Tehachapi. In 2017 the California State Finance Department found it’s the third fastest growing city per capita in Kern County. At first it was the people driving the increase.

Now Tehachapi's development services director, Jay Schlosser, expects that trend to continue because more industry is moving in to Tehachapi, like the new Adventist Health hospital last fall and Walmart this summer.

Schlosser said, “The Walmart I think brings supporting retail. Those things that again you might, think of the store you might go to on the same trip that you go to a Walmart to. So you might go to a bank. You might get your hair done at a salon.”

Schlosser added about two thirds of people who live in Tehachapi work outside the community. Having these new jobs from the hospital and Walmart and the supporting businesses that come with them, it will create more jobs for people to live and work in Tehachapi, and also prevent tax dollars from being spent outside the community like when people driving to Bakersfield for daily needs and goods.

“Those tax dollars are really important to communities because that’s what provides the money that pays for that police officer or pay for that fire fighter or to keep the roads clean and keep the roads and the asphalt in good condition,” said Schlosser.

To prepare for the increase of 550 jobs in Tehachapi, Schlosser said the city has a housing development formula to follow.

“So the city’s job in this situation is to have our process clear and efficient," said Schlosser. "So when the private sector is ready to build new homes or new commercial development that they know what they’re getting into when they come here.”

A new housing developer put in papers to build about 1,000 new single family homes, ranging from condos to custom houses in Tehachapi over the next 5 years. Schlosser said ore people moving to Tehachapi means more jobs supporting businesses like more churches, which is what brought the Saffords to Tehachapi. Those supporting businesses are also what Mike Safford hopes will help his wife find a job in town.

“She is actively looking," said Safford, "just recently started looking and has lots of interviews lined up and lots of opportunity to get one of the many jobs that are becoming available here in Tehachapi.”

Schlosser said a city needs to grow in order to stay healthy economically. He added the city’s challenge is finding the right amount of growth to improve the quality of life without losing the small-town charm.

“So the trick for us here is again is, is keeping that channeled in a healthy direction," said Schlosser. "You know, not explosive growth that we can’t keep up with and not so tightly controlled that we’re so anti-business, anti-development that it becomes unfeasible to develop."

For Hamblin, who this is her second time living in Tehachapi, she said she sees room for Tehachapi to grow.

She said, “I don’t think it’s going to turn into the fear that everybody see it turning into as this oh my gosh this big city we’re bursting at the seems. I don’t see that. I see that there is controlled growth and maturity.”

And for the Hamblins and Saffords they’re excited to see what growth is around the corner for Tehachapi.