'We all do stupid things at 17': Donald Trump Jr. on alleged Kenosha shooter being at protests 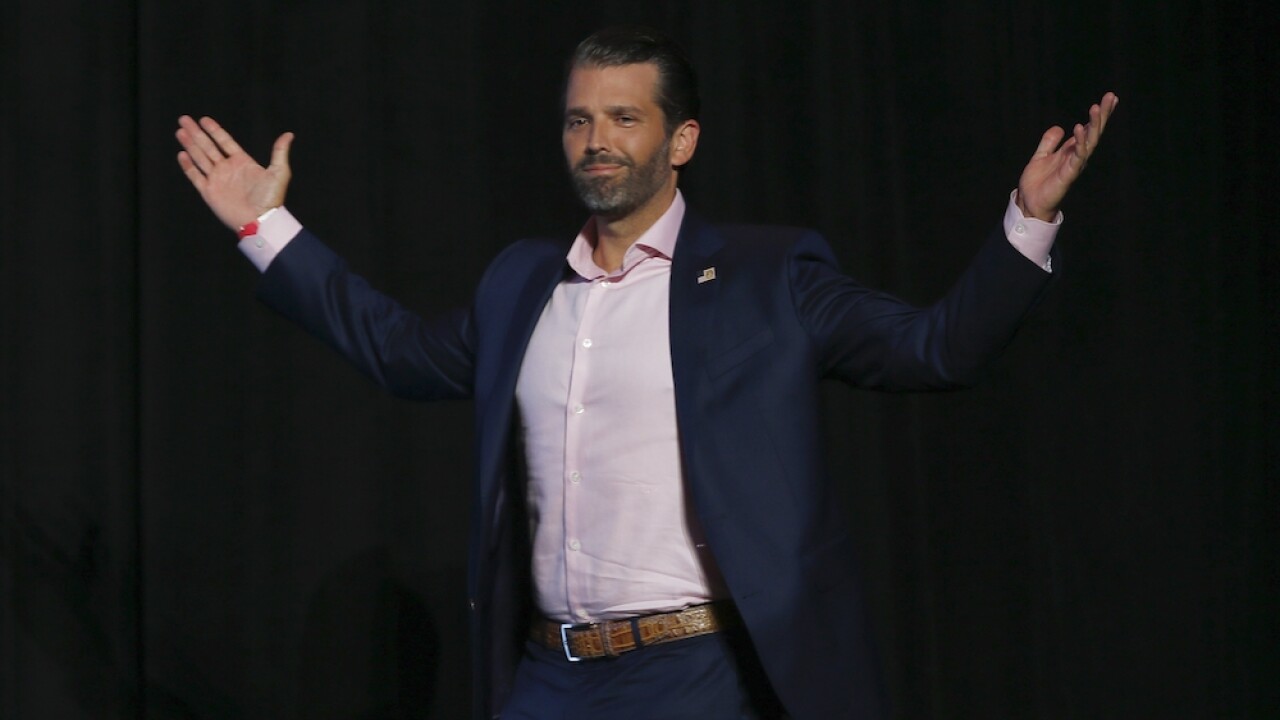 Copyright 2020 The Associated Press. All rights reserved
Ross D. Franklin/AP
Donald Trump Jr. reacts to the crowd as he comes on stage to speak prior to his father, President Donald Trump speaking at the Students for Trump conference at Dream City Church, Tuesday, June 23, 2020, in Phoenix. (AP Photo/Ross D. Franklin)

In an interview this week, Donald Trump Jr. said he is waiting for “due process” in the case against a teenager accused of shooting three demonstrators in Kenosha, Wisconsin, killing two, and seemed to refer to being at the protests and the shootings as “stupid things.”

The president’s son was talking to ExtraTV about his book, “Liberal Privilege: Joe Biden and the Democrats Defense of the Indefensible.”

The show’s host, Rachel Lindsay, asked Trump about the Black Lives Matter movement, as racial tensions and violence at some demonstrations are brought up at President Trump and Former Vice President Joe Biden’s campaign events.

After initial questions about what Trump Jr. thought of the movement, Lindsay asked, “The phrase 'Black Lives Matter…' do you understand what that means and what the fight is for it?"

“Of course. And I agree with it,” Trump Jr. said, “It’s a very good marketing message, it's a great catchphrase, but that doesn't back up a lot of the political ideology behind it.”

Lindsay then asks about his reaction to events in Kenosha. Jacob Blake, 29, was shot several times in the back by a Kenosha police officer. He is recovering in the hospital after his spinal cord was severed.

Video of the shooting went viral and sparked demonstrations for several nights in Kenosha. It also inspired professional athletes to cancel practices and games the week of the shooting, to urge their leagues and fans to think about social injustice issues.

A few nights after Blake’s shooting, investigators say 17-year-old Kyle Rittenhouse drove to Kenosha from his home in Illinois with an AR-15. He allegedly shot three demonstrators, two of them died.

Rittenhouse was arrested at his home and faces five criminal counts including intentional homicide and reckless homicide.

On a visit to Kenosha, President Trump visited with police officers and business owners whose stores had been damaged by protesters. He said he did not meet with the Blake family because they wanted a lawyer present for the meeting.

Lindsay pressed Trump Jr. on why the administration has not spoken out about what happened to Blake, or the demonstrators who were shot.

"But why hasn't the Trump Administration or President Trump condemned what happened in Kenosha with Kyle Rittenhouse… coming across state lines and… murdering two people and injuring another [at a protest]?” Lindsay asked.

“We're waiting for due process. We're not jumping to a conclusion… If I put myself in Kyle Rittenhouse['s shoes], maybe I shouldn't have been there. He's a young kid. I don't want young kids running around the streets with AR-15s… Maybe I wouldn't have put myself in that situation — who knows...? We all do stupid things at 17,” Trump Jr. replied.

“It's a little beyond stupid," Lindsay responded.