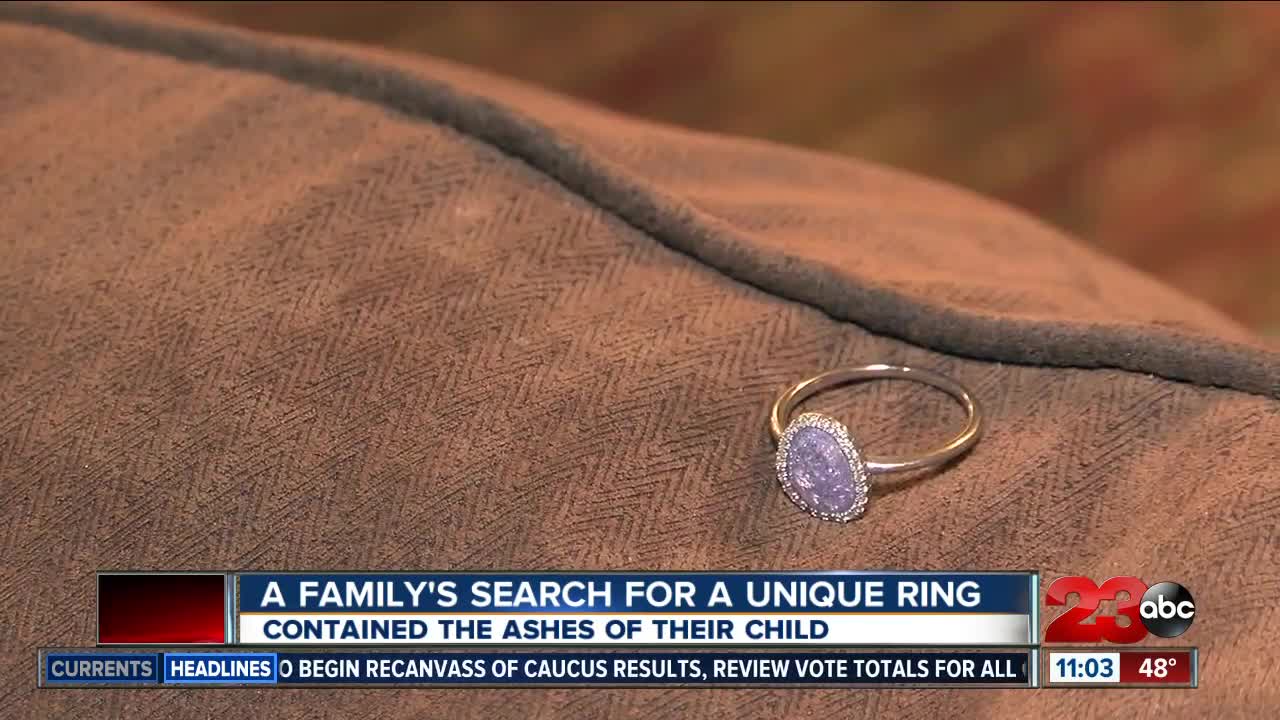 BAKERSFIELD,Calif. — A local mother is recovering after nearly dying due to pregnancy complications and now she's asking for help locating a missing piece of jewelry with great sentimental value.

Debbie Rodriguez was six months pregnant on January 3 when she realized something was wrong with her expected daughter, Faith.

"I had to deliver my baby early and unfortunately they couldn't find a heartbeat at my six-month checkup," said Rodriguez. "They told me I had to deliver her at the hospital."

Rodriguez said that she's never had complications before. Her family, along with her two other children Parker and Lexi, have all been trying to heal.

"I love you and I will always remember you," said Parker Rodriguez.

Rodriguez said her husband then decided to get several keepsake pieces filled with Faith's ashes.

Now, one of those pieces is missing.

On Feb. 9 Rodriguez says she started hemorrhaging and was treated at Adventist Health in Bakersfield. Rodriguez ended up receiving four units of blood.

During that time she took off her ring, filled with her daughter's ashes, and hasn't seen it since.

"My husband put it in his pocket and then we went to the Kaiser Permanente Stockdale Pharmacy and that's where we lost it," Rodriguez said.

The family said that they retraced their steps a handful of times, looking for the silver and pink stone ring. But their search has been fruitess.

Rodriguez said since posting about the missing ring on social media, they've received a bounty of support from the community.

They said even strangers have offered their help.

"A good Samaritan messaged me today who lives close to the Stockade Kaiser Pharmacy and she went in there herself to check," Rodriguez said. "She asked to see if they have received it and they said no. She even has offered to put fliers up, the community has been amazing."

Rodriguez said they are remembering Faith through many cards, prayers, and other keepsakes filled with her ashes.

They said they will continue to carry Faith wherever they go.

"I would really love if someone has already found it and doesn't realize how special it is if they can return it to the Kaiser Permanente security office," Rodriguez said. "They can contact me or if someone could even look for it."

The Rodriguez family said they remain hopeful that the missing piece of their baby girl Faith is returned home.

If you have any information on the missing ring call 661-243-0266 or email at Debbie.McCaz.rod@gmail.com.