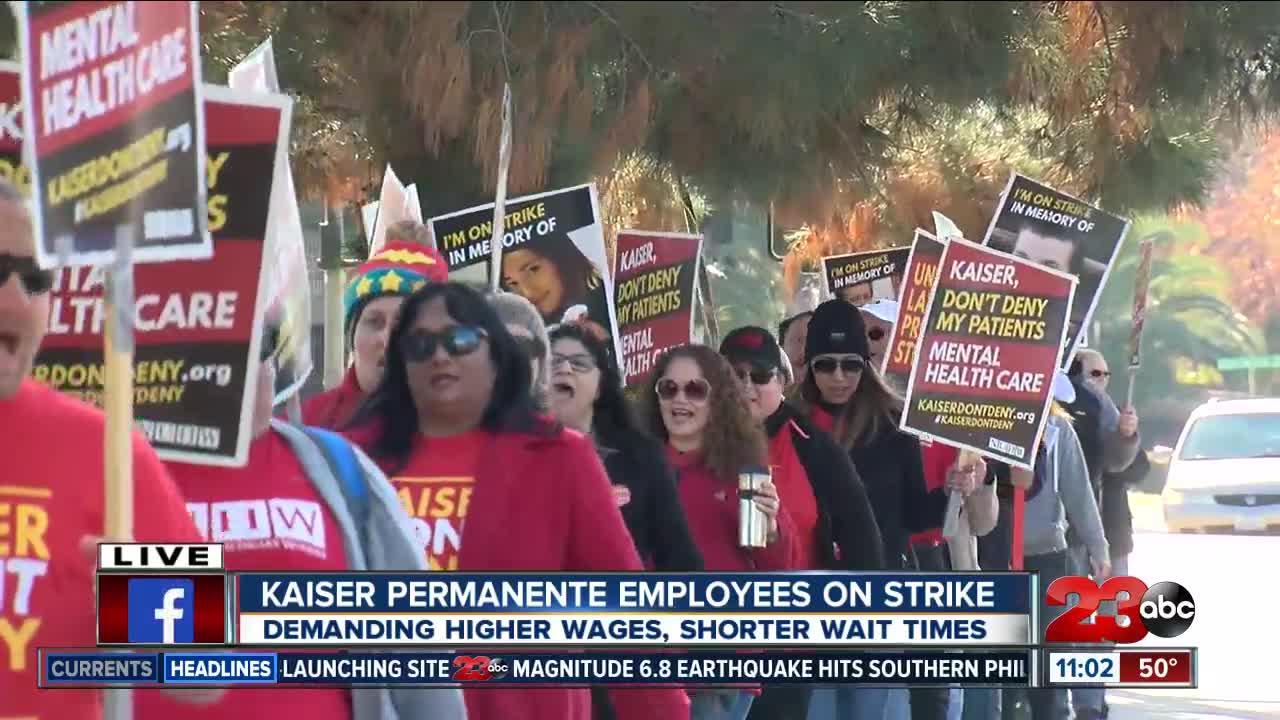 BAKERSFIELD, Calif. — On Monday, thousands of workers at Kaiser Permanente hospitals across California, including the Kaiser Medical Center here in Bakersfield, went on strike as they fight for changes on mental health.

According to our affiliate KABC, workers are demanding better care for their mental health patients - from urgent psychiatric services to better evidence-based treatments.

Workers are reportedly scheduled to strike for five days straight.

The group went on strike last December and still didn't have an agreed-upon contract.

Kaiser Permanente said they have been working with the union through an external mediator to come to an agreement.

Kaiser Permanente Southern California Region issued its own statement on the strike that read:

Despite the National Union of Healthcare Workers’ (NUHW) decision to strike, it is important our members know that our hospitals and medical offices remain open. Our commitment to patients comes first. We are working hard to deliver the high-quality care and services members and patients need. Anyone in need of urgent mental health or other care will receive the services they require. Where necessary, we will call members to reschedule some non-urgent appointments. We apologize for any inconvenience caused by this unnecessary strike.

We have been jointly working with an external, neutral mediator to help us reach a collective bargaining agreement with the National Union of Healthcare Workers (NUHW). The mediator recently delivered a proposed compromise to both sides that we are seriously considering; however, the union has rejected it and announced plans to strike instead of working through the mediated process.

This is NUHW’s sixth noticed strike within a single year. We believe that NUHW’s repeated call for short strikes is disruptive to patient access, operational care and service and is frankly irresponsible. Although Kaiser Permanente will make every effort to minimize patient disruption, due to the strike we may be forced to reschedule appointments and devote valuable resources needed elsewhere in our organization to instead address the continuity of care for our members and address any urgent patient care issues.

A strike does nothing to help our important work to advance care, nor does it help us achieve a mutually beneficial contract. All it does is put our members in the middle of bargaining, which is not fair to them, especially during the holidays when rates of depression can spike and our patients are counting on their caregivers to be there.

Rather than calling for a strike, we ask that NUHW’s leadership continue to engage with the mediator and Kaiser Permanente to resolve these issues.