Charles Manson died in Kern County a year ago

November 19th, marks the one year anniversary of the death of mass murderer and former cult leader Charles Manson. He was 83-years-old.

On November 19, 2017 Manson died at Mercy Downtown in Bakersfield and his death certificate confirms his cause of death was acute cardiac arrest, respiratory failure and metastatic colon cancer. According to the death certificate, there was no autopsy.

Charles Manson ordered the killings of seven people in the span of two nights, but did not participate. The killers took a total of seven people, inflicting 169 stab wounds and seven .22-caliber gunshot wounds. Both crime scenes were connected through some of the horrifying details

The Murders
On August 9, 1969,  at the home of actress Sharon Tate who was eight months' pregnant was killed along with; a celebrity hairstylist named Jay Sebring; coffee fortune heiress Abigail Folger; writer Wojciech Frykowski; and Steven Parent, a friend of the family's caretaker.

The next evening, a Supermarket executive Leno LaBianca and his wife, Rosemary, were killed at their home.

The word pig was written in victim blood on the walls of one home and the front door of another. There was also another phrase apparently scrawled in blood: Helter Skelter (it was misspelled Healter). The reason for the disturbing writings, the prosecutor argued, was because Manson wanted to start a race war and had hoped the Black Panthers would be blamed for the killings.

On June 16, 1970, Manson and three of his followers, Susan Atkins, Patricia Krenwinkel and Leslie Van Houten went on trial in Los Angeles. Manson and his followers created a circus-like atmosphere in the court with singing, giggling, angry outbursts and even carving X's in their foreheads.

The charges came after Susan Atkins, who was already in jail on another charge, bragged to a fellow inmate about the Tate murders. She said they did it "because we wanted to do a crime that would shock the world. ..."

Manson was originally sentenced to death but the death penalty was briefly abolished in the state during the People v. Anderson case in 1972. California did not have the life-without-parole sentence at the time and  his concurrent sentences were commuted to life in prison.

He also was convicted in the connection with the killings of Gary Hinman, a musician, and stuntman Donald "Shorty" Shea in 1969.

Manson served his sentence in Corcoran State Prison, which is about an hour North West from Bakersfield, California. Inmate Manson had been denied parole 12 times between November 16, 1978, and April 11, 2012; the last parole hearing he attended was March 27, 1997. He was not eligible to have another parole hearing until 2027.

In a 1987 prison interview with CNN, he said, "I spent the best part of my life in boys' schools, prisons and reform school because I had nobody." 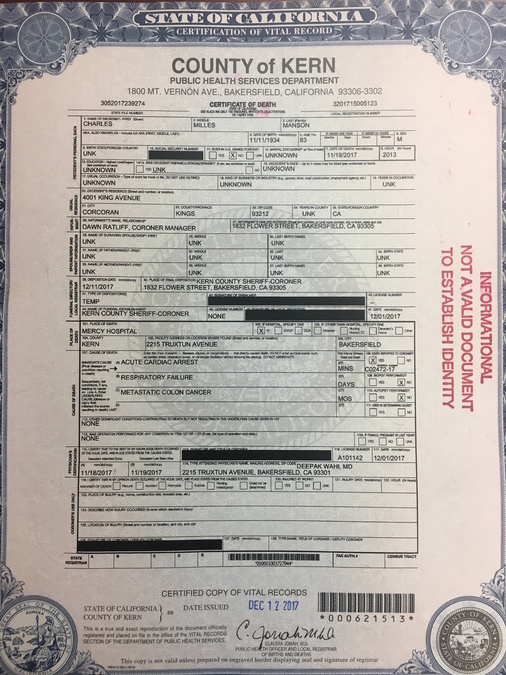 The Past
After marrying twice and spending half his life in prison, 32-year-old Manson made his way to Berkeley, California, by way of San Francisco in 1967. He established himself as a guru in the summer of love, and soon shared a home with 18 women.

By 1968, race riots, the Black Panther movement, and anti-world violence convinced Manson that Armageddon was coming. He called it Helter Skelter after the famous Beatles song.

"I was mesmerized by his mind and the things he professed," Manson Family member Leslie van Houten once said.

Laurie Levenson, a professor at Loyola Law School who follows high-profile cases, described Manson in 2009 as the worst of the worst, evil incarnate. "If you're going to be evil, you have to be off-the-charts evil, and Charlie Manson was off-the-charts evil," Levenson told CNN.

Manson died at the age of 83 in Bakersfield, California from natural causes, according to the CDCR.