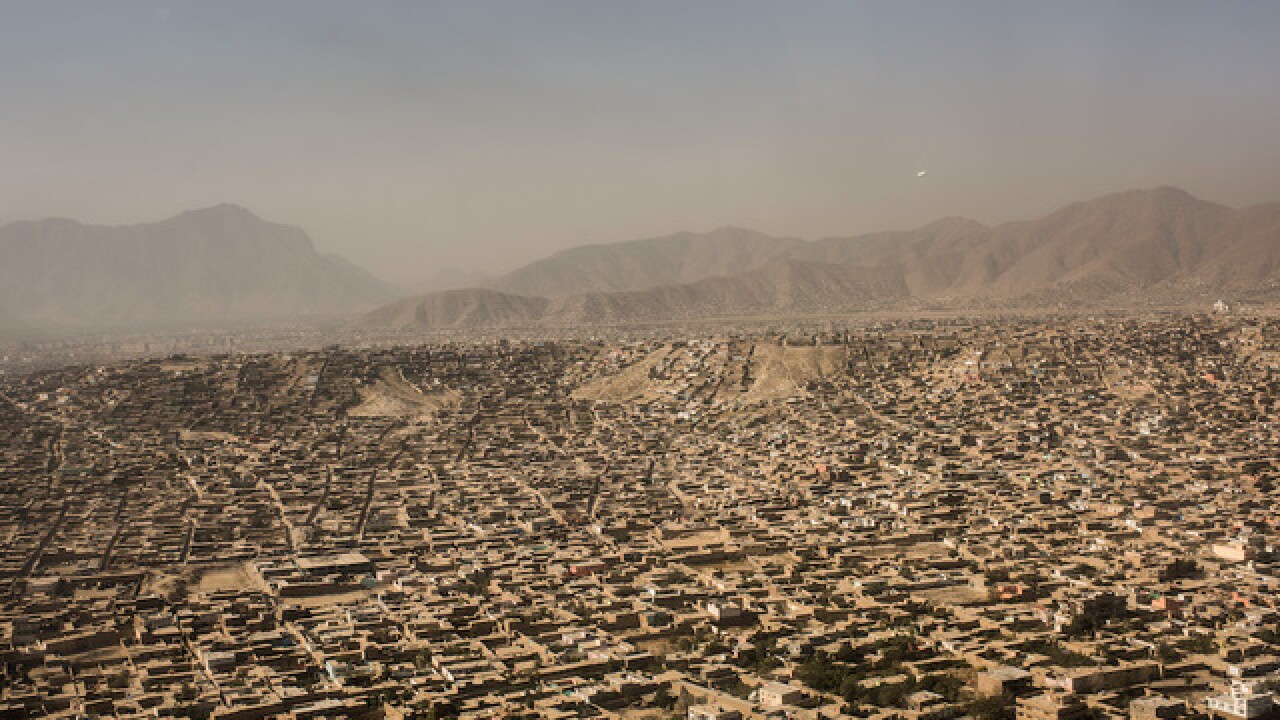 Copyright Getty Images
Andrew Renneisen
<p>KABUL, AFGHANISTAN - SEPTEMBER 5: An aerial view of Kabul is seen from a helicopter on September 5, 2017 in Kabul, Afghanistan. Currently the United States has about 11,000 troops in the deployed in Afghanistan, with a reported 4,000 more expected to arrive in the coming weeks. Last month, President Donald Trump announced his plan for Afghanistan which called for an increase in troop numbers and a new conditions-based approach to the war, getting rid of a timetable for the withdrawal of American forces in the country. (Photo by Andrew Renneisen/Getty Images)</p>

ISIS has claimed responsibility for a suicide bomb attack on a Shia cultural center in Afghanistan's capital, Kabul, that left 41 people dead and dozens injured.

Two children were among the dead and 84 people were injured in the blast, according to a Health Ministry spokesman.

The attack rocked the center in the basement of a building in the west of the city at around 10:30 a.m. (12.30 a.m ET) Thursday morning. It also hit the Afghan News Agency, which has an office on the floor above, Afghan Interior Ministry spokesman Nasrat Rahimi said. Two more blasts followed at the same building, but caused no injuries.

The ISIS-affiliated Amaq News Agency said the terror group carried out the attack.

A crowd of just under 100 people were meeting at the cultural center to mark the anniversary of the Soviet invasion of Afghanistan when a bomber infiltrated the crowd and detonated the device, according to journalist Ehsanullah Amiri, who was at the scene.

Ambulances and police vehicles ferried the dead and wounded to nearby hospitals, Amiri said, as security forces cordoned off the site and blocked the main road approaching the scene. Authorities also warned onlookers to stay away from the site of the explosion, where there is also a Shia mosque.

Both the Afghan capital and the wider country are beset with attacks on its military, police and civilian populations. ISIS and the Taliban have both carried out several attacks in the country this year, and they have also been fighting each other over territory, particularly in the east of the country. The Taliban earlier denied responsibility for the blasts.

Earlier this week at least 10 people were killed after a suicide attacker detonated a bomb in an attack claimed by ISIS.

That attack targeted an office of the National Directorate of Security, Rahimi said, near the US Embassy and other diplomatic missions.

Germany "will not relent its support for Afghanistan," he wrote on Twitter.

EU Ambassador to Afghanistan Pierre Mayaudon said he was "appalled" by the bombing, which he said was an attack on freedom of speech, while the UN Assistance Mission in Afghanistan said its human rights workers were on ground establishing facts.

"With the Afghan capital hit once again, no one can credibly claim that Kabul safe. The European governments who insist on this dangerous fiction by forcibly returning Afghans are putting their lives in danger," Amnesty International South Asia Director Biraj Patnaik said.

Patnaik added that it was one of the deadliest years on record in the country.

A number of other attacks have targeted the city in recent months:

October 20: Dozens of Afghans were killed in two mosque attacks, claimed by ISIS.

October 21: A suicide bombing near a military academy took another 15 lives, claimed by the Taliban.

October 17: At least 41 soldiers were killed in an attack on their base in eastern Afghanistan, claimed by the Taliban.

September 13: A suicide bomber killed three people in a blast outside a cricket stadium in Kabul.

August 25: 20 people killed in an attack on a Shiite mosque, for which ISIS claims responsibility.