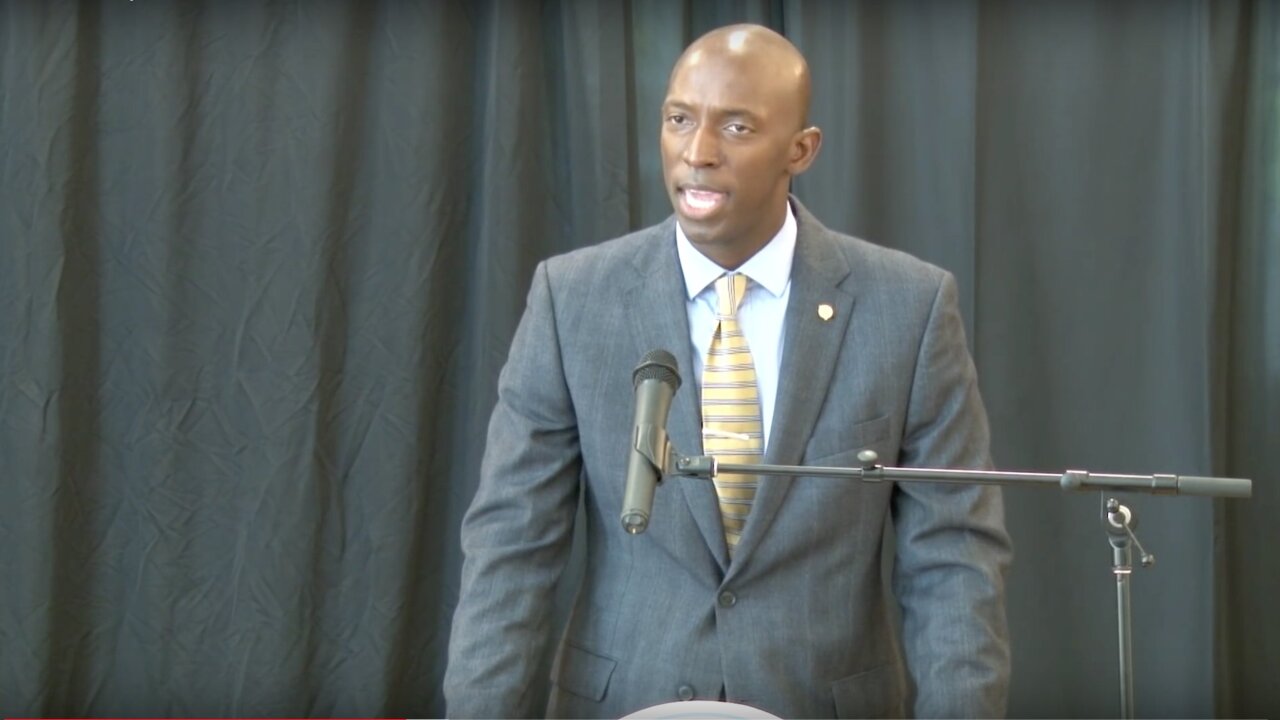 Wayne Messam, the little-known mayor of Miramar, Florida, announced Thursday that he is running for president, launching a campaign that will look to accomplish the unlikely: Turning the mayor of the 140,000-person town into the next president of the United States.

Messam, in a highly produced video released to CNN, tells voters that he is running for president and rails against what he calls a "broken" federal government in Washington, DC.

"When you have a senior citizen who can't afford her prescription medicine, Washington is broken. When our scientists are telling us if we don't make drastic changes today, the quality of our air will be in peril, Washington is broken," Messam says in the video. "Everyday people are graduating from universities with crippling debt stifling their opportunity for financial mobility, that is what's broken with this country."

In an interview on CNN "New Day" announcing his bid, Messam said America needs "the leadership that will make these issues a priority and have the political will to solve these issues for the American people."

He pointed to Miramar's fast growing economy and argued that his city passed a living wage.

Messam's entrance into the race, two weeks after he launched an exploratory committee, makes him the longest of longshots in an already crowded field of Democrats -- including more than a handful of senators -- vying to take on President Donald Trump in 2020. Messam, a 44-year-old African American Democrat who has led Miramar since 2015, is not the only mayor in the race, given South Bend, Indiana, Mayor Pete Buttigieg is pursuing a bid, as are Julian Castro, formerly the mayor of San Antonio, Texas, and Cory Booker, formerly the mayor of Newark, New Jersey.

In a nod to the fact that Messam is largely unknown outside of South Florida, the video focuses extensively on the mayor's personal story, noting that his parents immigrated to the United States from Jamaica, his father worked as a contract sugar cane cutter in Florida and, through their work, he went on to play on the national championship winning Florida State University football team in 1993.

"You know, I can see him looking around in these fields envisioning that his children would be successful one day and they wouldn't have to suffer the way to he suffered," Messam says in the video, which was produced by Seven Knots Productions. "I'm passionate about the American Dream because it's not a fictitious thing for me it's real for me."

The Democrat, who currently owns a construction business with his wife, also talks in the video about being Miramar's first black mayor and getting to this place in life after growing up in "The Muck," an area around Lake Okeechobee where sugar cane grows.

A campaign spokesman tells CNN that Messam's decision to announce on March 28 is also significant: It is the anniversary of what is known as Martin Luther King Jr.'s final march, when King marched with sanitation workers who were on strike in Memphis.

In an interview with CNN ahead of his decision to announce an exploratory committee, Messam acknowledge the longshot odds of his candidacy.

"I see it to be a unique opportunity for Americans to look at another option of leadership," he said. "When you look at what is going on in Washington, the status quo is who is stepping up to be our next president. ... When you look at a mayor, Americans see mayors favorably. We are at the front line of what Americans are dealing with every day."

Messam traveled to South Carolina earlier this month as part of his 2020 exploration and, according to a campaign spokeswoman, the mayor plans to travel back to South Carolina and make a trip to Nevada in the coming weeks.

The repeat trips to South Carolina are going to be a staple of Messam's campaign, aides say, because the mayor believes his best path to victory is by consolidating the largely African American vote in the state to show viability.

Cory Alpert, a South Carolina resident who has been talking to Messam, said that the voters in the state have yet to coalesce around a front runner and that the state is wide open.

"Obviously he is a dark house, it is a longshot campaign," he said. "But I discredit anyone who says they know what is going to happen in the next year. It is the kind of year where someone can come out of nowhere."

Messam, who played wide receiver for Florida State, also plans to lean on his connections to athletes to raise money and support as he mounts his longshot campaign. That includes, according to the Messam campaign, former Jacksonville Jaguars running back Fred Taylor and journeyman fullback Zack Crockett.

Messam is progressive on guns, immigration and the environment, and he supported Hillary Clinton in the 2016 election.

The mayor was part of a group that sued the state of Florida in 2018 over a law that restricted his ability to create municipal gun regulations after the mayor wanted a new amphitheater in his city to be a "gun-free venue."

Messam has also pushed back against Trump's immigration proposals and, in 2017, he proposed requiring immigration officials have a warrant to enter city-owned buildings and some schools.

"We want to make sure that our parents at least, regardless of their immigration status, that is one less fear that they have -- in regards to the prospect of their child being disrupted due to what we have seen going on across the country," Messam said at the time.

On the environment, Messam signed on to a letter from more than 400 mayors that rebuked Trump for leaving the Paris Climate Accord.