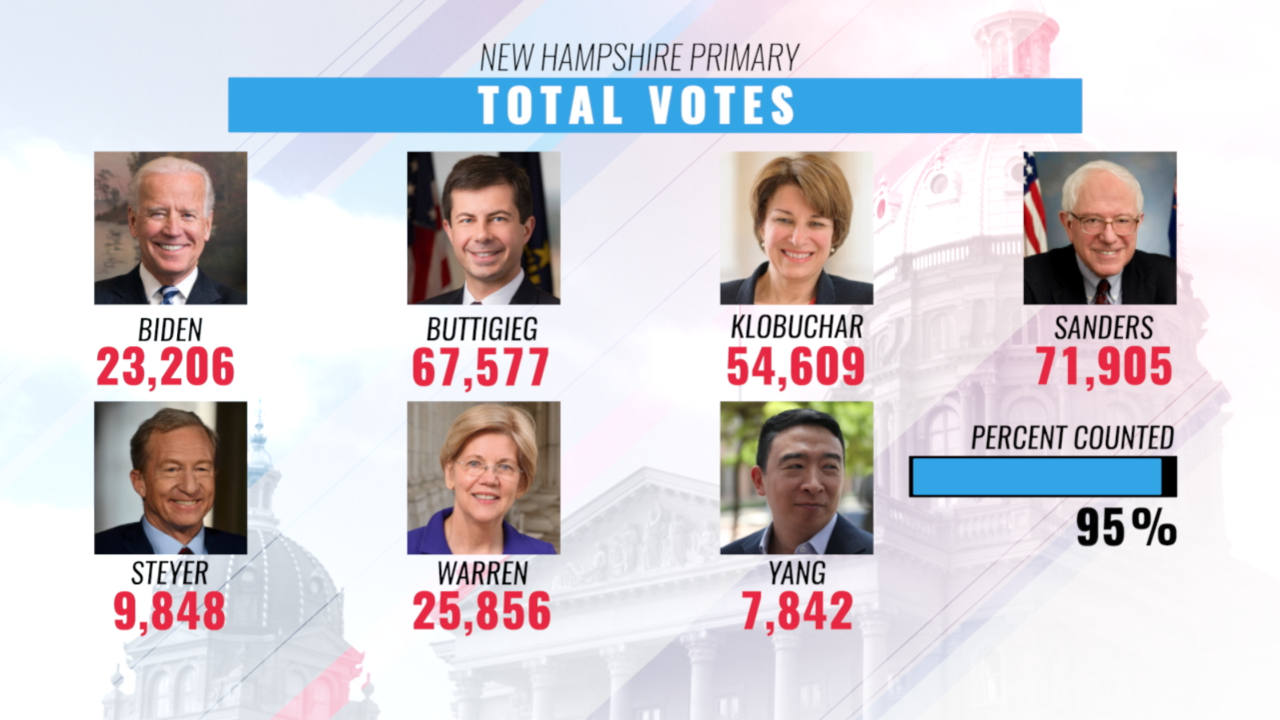 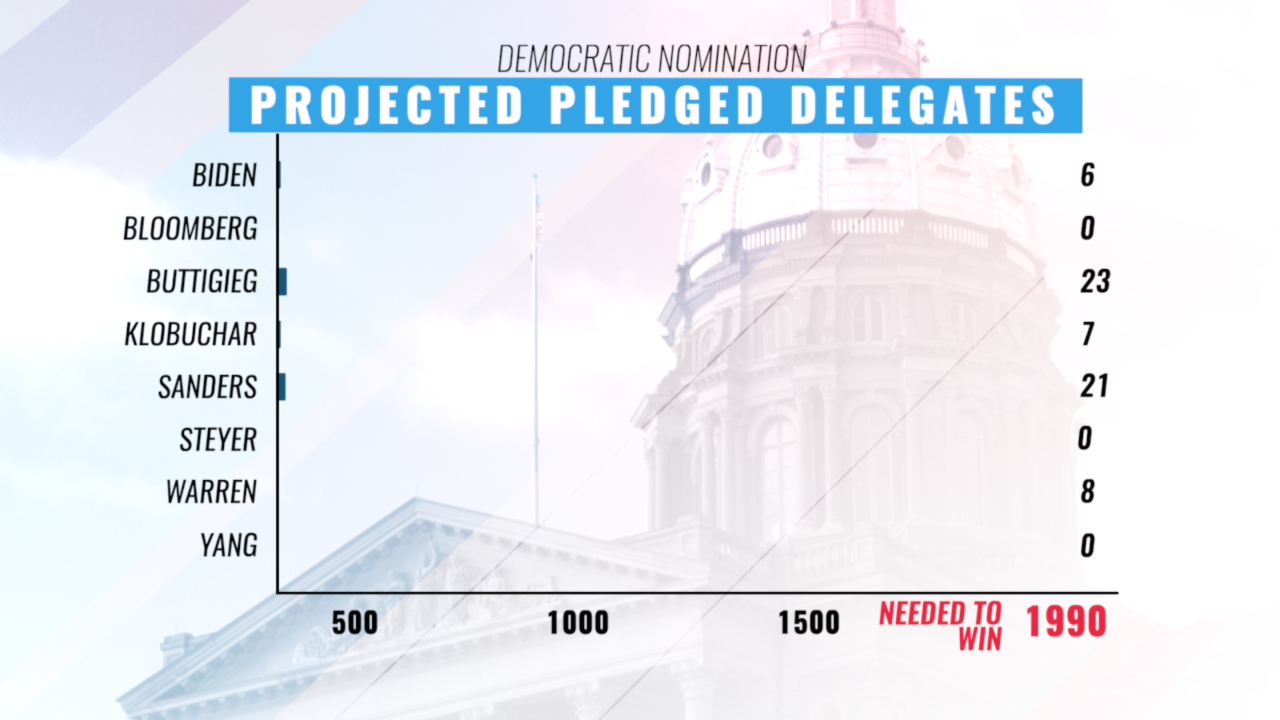 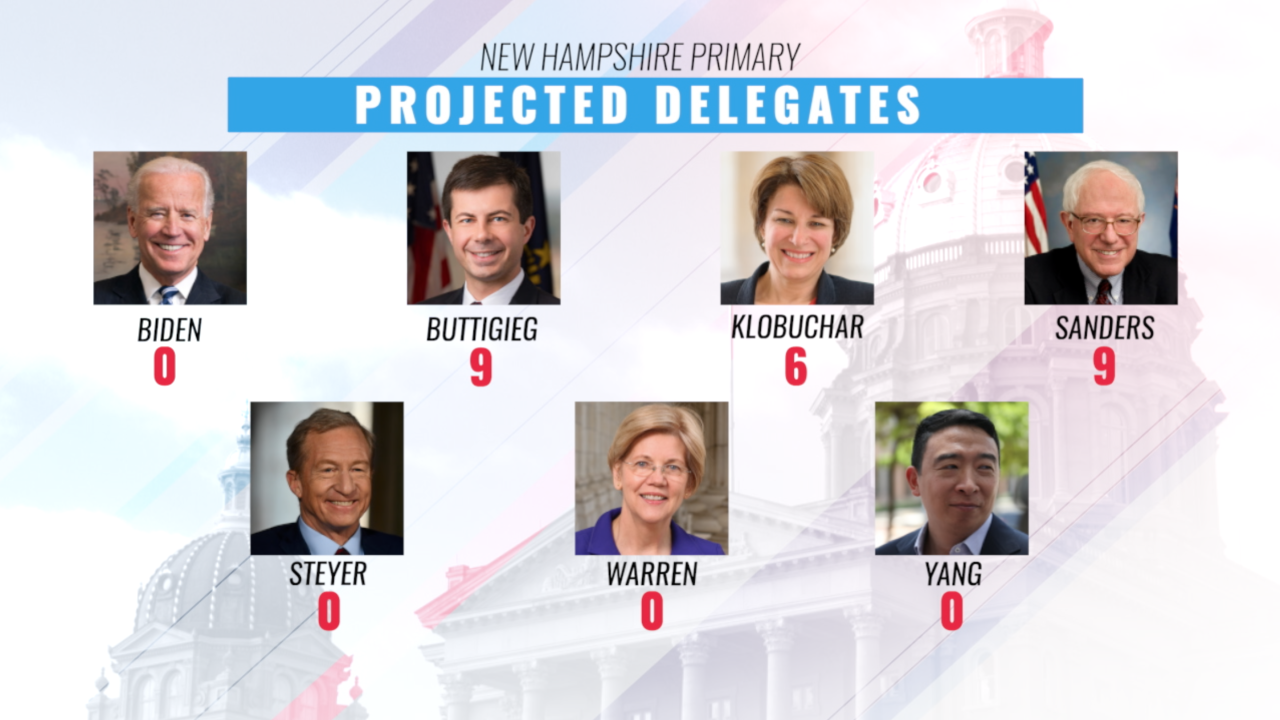 New Hampshire voters went to the polls for the nation's first primary on Tuesday, eight days after Iowa Democrats held a caucus fraught with challenges in counting the votes.

With nearly 95% of the vote in, Sen. Bernie Sanders holds a less than 2 percent lead over Mayor Pete Buttigieg.

Based on results, Sanders has won the vote in New Hampshire.

"The reason that we won tonight in New Hampshire, we won last week in Iowa is because of the hard work of so many volunteers. And let me say tonight that this victory here is the beginning of the end for Donald Trump," Sanders said.

A total of 24 national delegates are up for grabs from Tuesday’s primary. It takes 1,990 delegates to win the nomination, so a win on Tuesday is only a very small step toward winning the nomination. The Democrats divvy delegates in a proportional basis, meaning with a wide-open field, no candidate will take a majority of the delegates.

Despite the second-place finish, Buttigieg and Sanders could end up with the same number of delegates once 100% of the votes are tabulated. Buttigieg offered a message of Democratic unity following the vote.

"I know we all share the spirit that we heard from some of our volunteers at a poll site earlier today who welcomed a competing candidate with chants of 'Vote Blue No Matter Who.' We are the same team," he said.

But two candidates who will not reach the 15% threshold to obtain delegates are Joe Biden and Elizabeth Warren. The results are largely disappointing for the two, especially given that Biden was once the frontrunner, and Warren represents nearby Massachusetts.

Arguably the biggest surprise of the night was the performance of Sen. Amy Klobuchar, who will finish third. She has been consistently polling fifth in recent months.

Her third-place finish has given her a spark going into the Nevada Caucus and South Carolina primary.

Although the race for the Democratic nomination is still in the early stages, Klobuchar is already looking forward to November.

"We know that we cannot win big by trying to out divide the divider and chief," she said. "We know that we win by bringing people with us instead of shutting them out. Donald Trump's worst nightmare is that the people in the middle, the people who have had enough of the name calling and the mudslinging have someone to vote for in November."

Even Warren took a moment to single out Klobuchar during her speech to supporters.

"I also want to congratulate my friend and colleague Amy Klobuchar for showing just how wrong the pundits can be when they count a woman out," Warren said.

But with New Hampshire among the first votes cast in the nomination process, it is important to do well for fundraising and momentum purposes.

Biden is already trying to look past New Hampshire as he has very little momentum moving forward. He opted to spend Tuesday night in South Carolina, trying to convince supporters that back to back lackluster performances are not indicative of the diverse support behind his campaign.

“We just heard from the first two of fifty states. Two of them. Not all the nation — not half the nation … two. Where I come from, that’s the opening bell, Biden said.

Not everyone will be on to the next race in Nevada on Feb. 22. Andrew Yang and Sen. Michael Bennet announced Tuesday they are exiting the race.