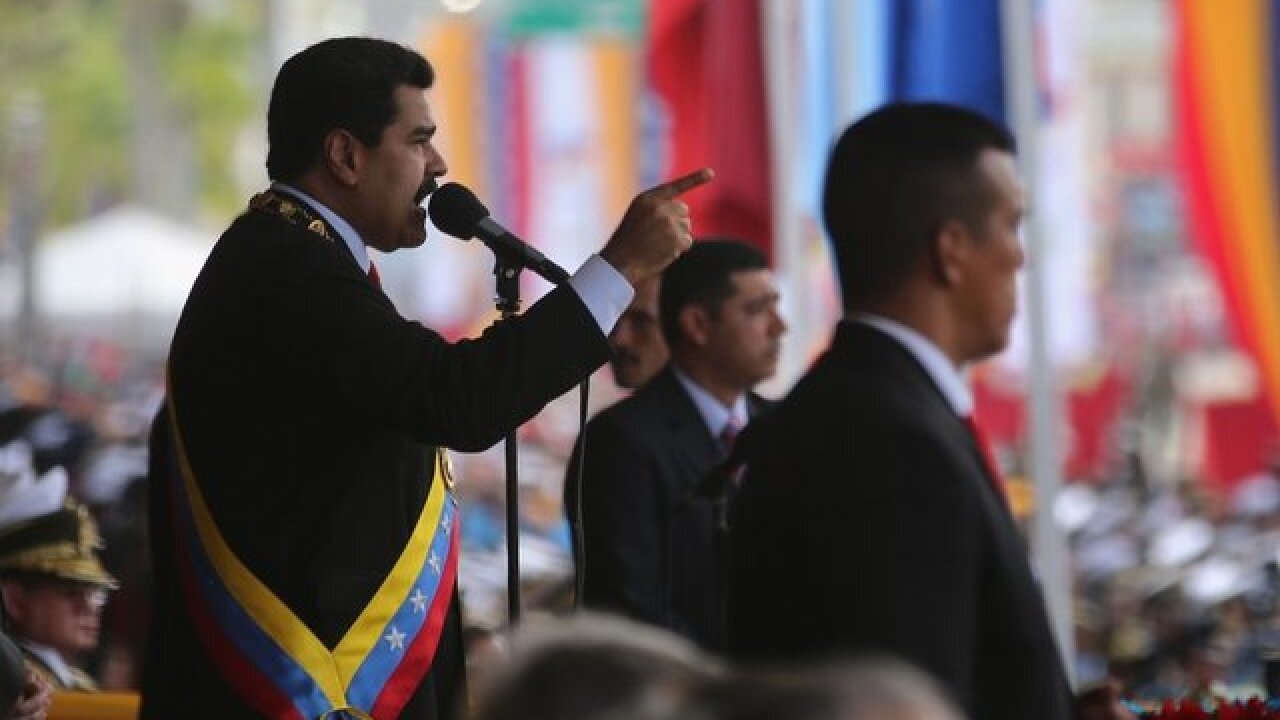 Six people have been arrested after Saturday's apparent assassination attempt on President Nicolas Maduro in the Venezuelan capital of Caracas, the nation's interior minister said on national TV.

Maduro survived the assault after several drones armed with explosives flew toward him during a speech at a military parade, an attack he blamed on far-right elements and Colombia's outgoing president, Juan Manuel Santos.

Reverol said one of the detained had an outstanding arrest warrant for his alleged role in the August 2017 attack on a military base in Valencia.

Another of the detained people was previously arrested during the 2014 anti-government protests. Reverol said he doesn't rule out further arrests.

The munitions could cause damage in a radius of 50 meters, and intelligence services were able to identify the nearby streets that were used for launching the drones from a distance, he said.

One of the drones flew over the presidential stage with the intention of being detonated by the attackers, but he said the authorities were able to cause it to lose control and detonate outside the area the attackers targeted.

Reverol said the second drone lost control and fell into an apartment building, where it exploded on the first floor.

The incident took place as Maduro was speaking at a commemoration of the 81st anniversary of the Venezuelan national guard that featured a military parade.

Live footage of the event showed him suddenly looking up startled midspeech, while beside him his wife, Cilia Flores, winced after a loud bang and dozens of soldiers were seen scattering. Seven members of the national guard were hurt during the attack.

Venezuela's attorney general, Tarek William Saab, said he had ordered an investigation into the incident, assigning three prosecutors to the investigation.

Maduro appeared on national TV a couple of hours later, when he spoke about the investigation and arrests.

He said the Venezuelan political far right in collaboration with the Colombian far right and Colombian President Santos were behind the attack. He also blamed Venezuelans living in the United States.

"The preliminary investigation indicates that many of those responsible for the attack, the financiers and planners, live in the United States in the state of Florida," Maduro said.

"I hope the Trump administration is willing to fight terrorist groups that commit attacks in peaceful countries in our continent, in this case Venezuela."

The Venezuelan government has long blamed Colombia for plotting overthrows, and far-right elements in Bogota and Miami for attempting to undercut Maduro. Ivan Duque takes over as the Colombian President this week.

'A pretty high level of dysfunction'

Seeing the military scatter at a presidential ceremony suggests a "lapse in security" and "a pretty high level of dysfunction," David Smilde, a sociologist at Tulane University and senior fellow at the Washington Office on Latin America, told CNN.

With the exception of his immediate bodyguards, images of the incident raise questions about the government's ability "to keep things together."

"For the soldiers and whoever was running security, it was a bad day," he said.

Smilde said that it appears the soldiers are there because they have to be there.

"There's not deep belief in, or loyalty to, the government," he said. "If something like this happens, they're absolutely going to save themselves first."

In past years, when President Hugo Chavez was at his peak, this display of incompetence wouldn't have happened, Smilde said. Chavez died in 2013.

But so-called chavismo has been in decline since 2010. Maduro's support is thin, and he has loyalists in important positions instead of competent people, a state of affairs that leads to the undoing of authoritarian governments like the one in Venezuela, Smilde said.

The government model in Venezuela, Smilde said, is a model that emphasizes loyalty and the concentration of power, rather than competence, education, accountability and transparency.

Smilde said that competent and resourceful people he knew 10 years ago in Venezuela's government have all left or stagnated at mid-levels. Those who have moved up to higher positions lacked skill, but knew how to navigate and thrive in a corrupt system.