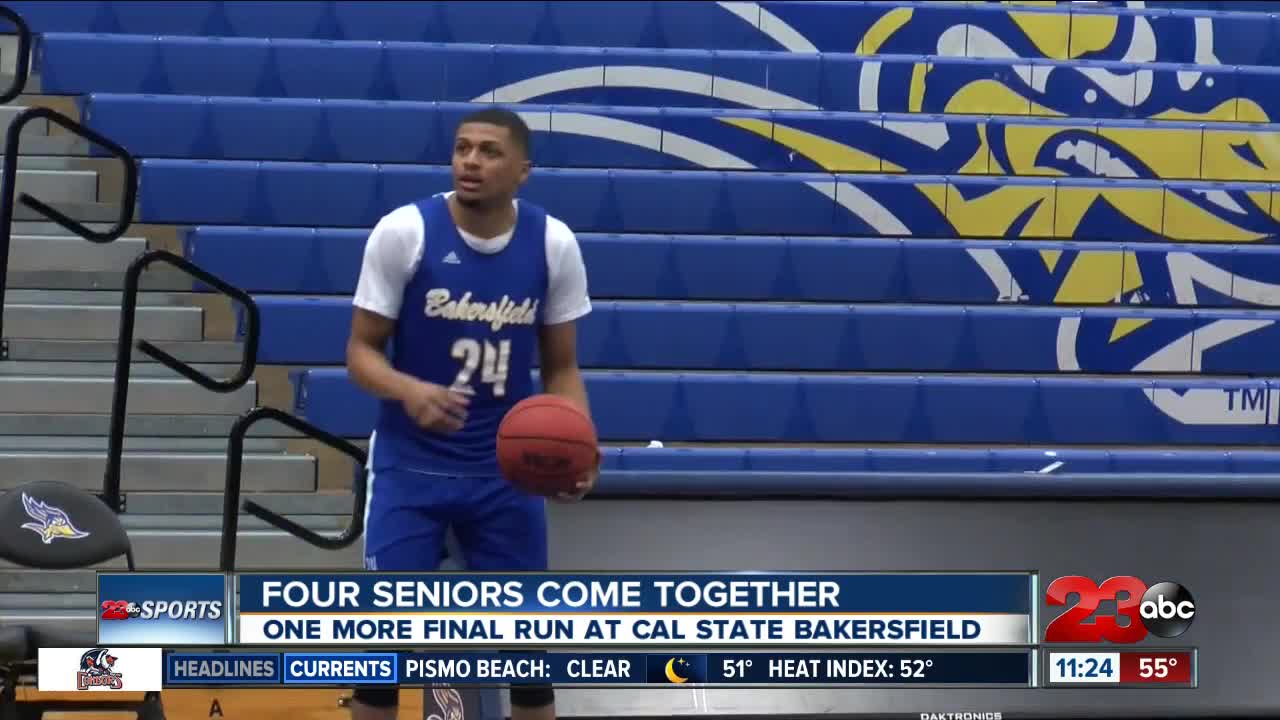 BAKERSFIELD, Ca. — A JuCo transfer from Mississippi. An east coast transplant, out of Philly. A Texas native and Baylor transfer. And a Liberty High grad, who happens to be the coach's son.

Four different guys coming from completely different backgrounds is what makes up the senior class of the 2018-19 Cal State Bakersfield Men's Basketball team.

"We have been through so much. We click, we talk, we hangout, if something's going I can talk to them, they come talk to me. The connection is there it's just like we're blood brothers," James Suber said about the connection between the group of seniors.

"I don't think you'll ever find another program like this where everybody cares about you and if they see a flaw in you, they're gonna get it," Damiyne Durham said.

The heart begins with the man who has led the team for the last eight seasons, Coach Rod Barnes.

"Like real life, that's my second daddy. And he helped us on the court and off the court and i see the growth. I see it almost every day," Durham said.

And for Damiyne, and Bray, coach Barnes' actual son, they got to be a part of highest high for this program, a WAC championship victory that led to the program's first ever NCAA Tournament appearance. And this group wants more.

"I want to go further than that last team went. I want to bring attention back to Bakersfield, back to CSUB, back on that championship podium," Bray Barnes said.

"We want to go to the final four, so that's like the big goal for us ," Suber said.

At one point in the season, that goal seemed within reach as the Roadrunners led the conference and couldn't be touched on the blue court, rattling off nine straight wins at home. But the 'Runners took a turn. Three straight home losses including a one-point heartbreaker to New Mexico State.

"We were up and then we took a debt. It hit us, I felt like we all needed that," Durham said.

These four seniors know this team has more heart to show, even if they are saving it up for the WAC Tournament in mid-March.

"When we're going to Vegas, we are going to be at our best. We done been through the downs. Right now the up is coming," Suber said.

"We all got big hearts, and we all got hard love for the game, I feel like we are going to make a huge turnaround and get back on track," Holden said.

Just three years ago it was that same tournament that allowed the team to right their wrongs, and they will look to do that again this year as this small group of seniors tries to leave one last legacy together.