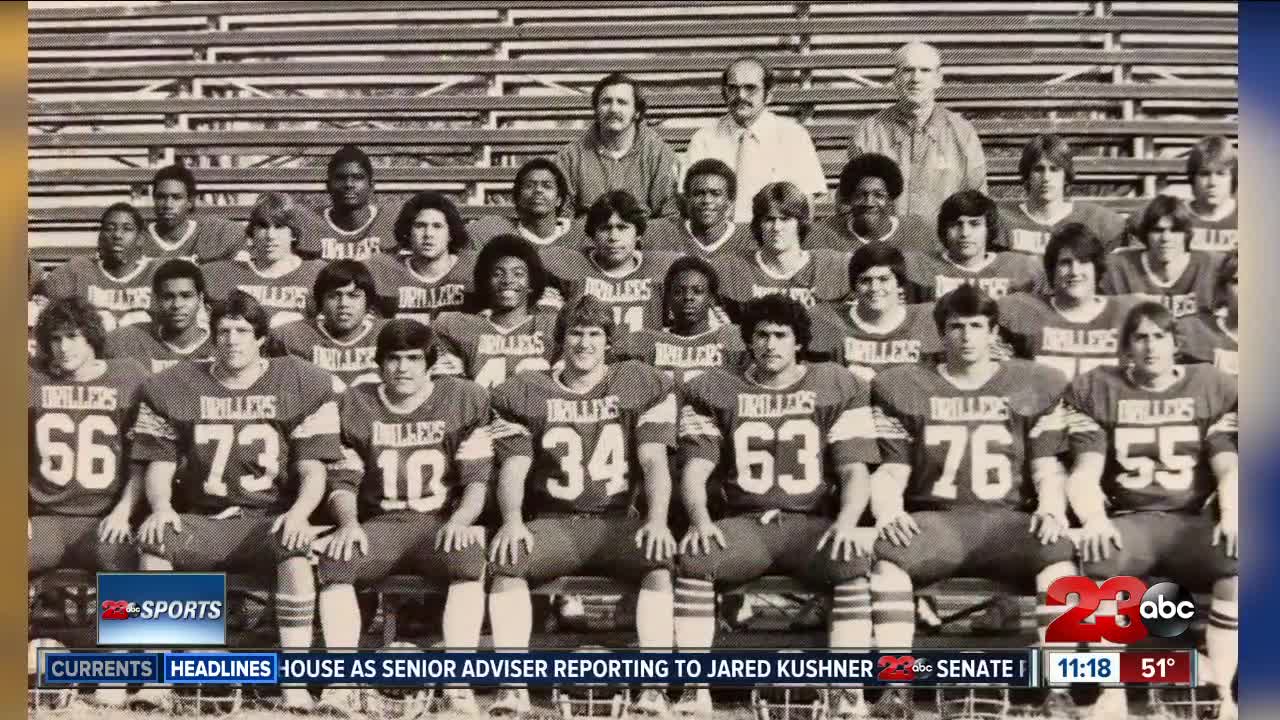 BAKERSFIELD, Calif. — There is definitely a coaching fraternity in football throughout Bakersfield as most coaches are connected in one way or another.

With the recent hiring at Bakersfield College of interim head coach R. Todd Littlejohn, a deeper sense of brotherhood has been brought to light between the newest Renegade coach and recently hired Bakersfield High School football coach, Michael Stewart, who now has a year under his belt as the head coach.

Both were teammates at BHS and then at BC before following their own athletic paths that eventually turned into coaching. Regardless of where their personal journeys took them, their relationship built in high school.

"Probably not too many days that go by that we’re not texting, or on the phone or checking in," Stewart said.

"Close is probably not even the way to describe our relationship. It's so special. He is literally my brother," Littlejohn said.

The two rooted in the sports they love: football.

Although their playing days for the Drillers and the Renegades is decades behind them. The memories are front and center. Especially when it comes to their competitive nature.

"Bakersfield high was always known for special teams and Todd was a pretty good punt returner, and I was outside linebacker," Stewart said.

"We played, gosh i want to say it was Antelope Valley, and I was returning a punt, and he was my escort, so to speak," Littlejohn said.

"I'm kind of blocking and once we would hit open air, you know, it was just an all out race to see who was the fastest. People laugh like, 'You guys are doing that during the game?'," Stewart said.

"Literally, in that return he and I were competing as to who was going to beat each other to the goal line, disregarding everything else. I scored, we got in the end zone and argued about who actually won," Littlejohn said through a laugh.

That competitive nature – likely not going away anytime soon.

"I know we'll find a way to compete against one another, trust me (laughs)," Littlejohn quipped.

That’s because they are now back home in Bakersfield to lead two of the city’s most historic football programs. They'll just have to find some new ways to compete as they coach different levels.

"You know so many people have teased this like are you gonna get back together," Littlejohn said.

"For now, him to be able to be here, you know, kind of us was like, oh man, we're back in the same zip code," Stewart said. "And so that's an honor. But just going to be great for him to be here and BC and this town are going to get a great coach."

For Littlejohn it was all about timing, a coaching career that spanned all three phases of the game and different levels, including junior college, division one and a stint in the National Football League.

"It is so cool to man just the people that that are able to see me full circle," Littlejohn said.

And for Stewart, who also had some playing time in the league, it felt like this was always meant to happen.

"You know little kids, young kids you talk about your life stories and things like that but to be in a spot where you can say man some of those dreams that we talked about are actually playing out in real time," Stewart said.

A dream that was almost too good to be true but still a bucket list moment for Littlejohn.

"It kind of was but I never told anybody," Littlejohn said. "You know, it's like I almost didn't want to disappoint myself, you know, obviously, when you talk about Bakersfield College and the people. So yeah, it is kind of cool like I can check it off now and be good with that.”

The two men back on the same fields where their legacies began as young boys as they are eager to help young athletes build their own.

"Whether they're great athletes further on down the line, but better men as they grow up and be you know outstanding citizens who contribute to their communities wherever they may be," Stewart said.

"Really for me, it's just a small way of saying thank you you know for supporting me for encouraging me, all of those things throughout the year so i want to have, you know, my first Gatorade bath really with the community," Littlejohn said.

The only difference is one will be repping Renegade red the other Driller blue.