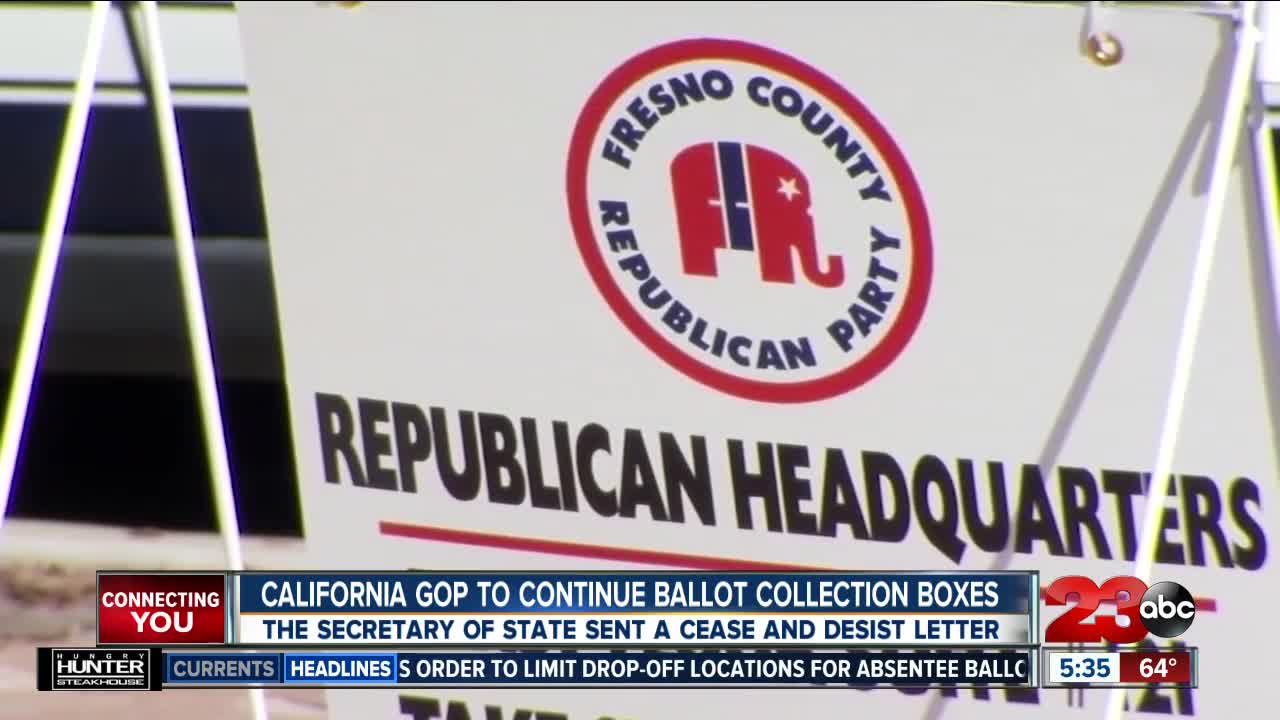 California's Republican Party is refusing to remove unauthorized ballot collection boxes placed in several counties. This despite a "cease and desist" order from the state. ABC's Josh Haskell has more.

California's Republican Party is refusing to remove unauthorized ballot collection boxes placed in several counties. This despite a "cease and desist" order from the state. ABC's Josh Haskell has more.

Even after California Secretary of State Alex Padilla sent a cease and desist letter to the California Republican Party regarding their illegal ballot drop boxes, the state GOP isn't backing down and said they plan to expand the program.

"We are going to continue this program. If he wants to take us to court, then we'll see him court," said Hector Barajas, spokesman for the California Republican Party.

The controversy started over the weekend when the secretary of state's office and county registrar's received reports of suspicious ballot drop boxes in Los Angeles, Orange, and Fresno counties. The state Republican Party said the boxes are legal because it's ballot harvesting which authorizes another person to take their ballot to a collection site. But the secretary of state said this doesn't qualify as ballot harvesting because the collection boxes are unmanned.

If any ballots were found in the unauthorized drop boxes, those voters could be contacted to vote again.

Republican Michelle Steel who is running against incumbent Harley Rouda in Orange County's 48th District released a statement saying "I don't condone any unofficial means of collecting ballots. Every vote counts, and we must ensure ballots are turned in and counted responsibly and legally."

Rouda believes this is a concerted effort by the state GOP to take votes away from him.

"On one hand they're arguing that mail-in ballots, that we have to be concerned about that process when on the other hand, they're literally putting out fraudulent ballot boxes and telling voters to bring their ballots and drop them off there. Here's the big concern: this is what the ballot looks like when it goes in. On the backside of this is the name of the person who is delivering that ballot, who the voter is. It's very easy for them to be able to see whether it is a Democrat or a Republican."

On Wednesday, President Donald Trump tweeted "Fight hard Republicans. They have been taking advantage of the system for years!" in regards to the collection boxes.

Fight hard Republicans. They have been taking advantage of the system for years! https://t.co/vaToeGjrHG

In Kern County, the elections office is reminding voters that the only permanent drop-off locations in the county are inside the election office and outside the county administrative building in Bakersfield. There will be curbside drop off events from 10 a.m. to 3 p.m. for the remaining Saturdays this month.

Other locations include county library branches, Bakersfield College and CSUB.

There are no reports right now of any GOP controlled boxes in Bakersfield.