Few legal wins so far as Trump team hunts for proof of fraud; here's the latest 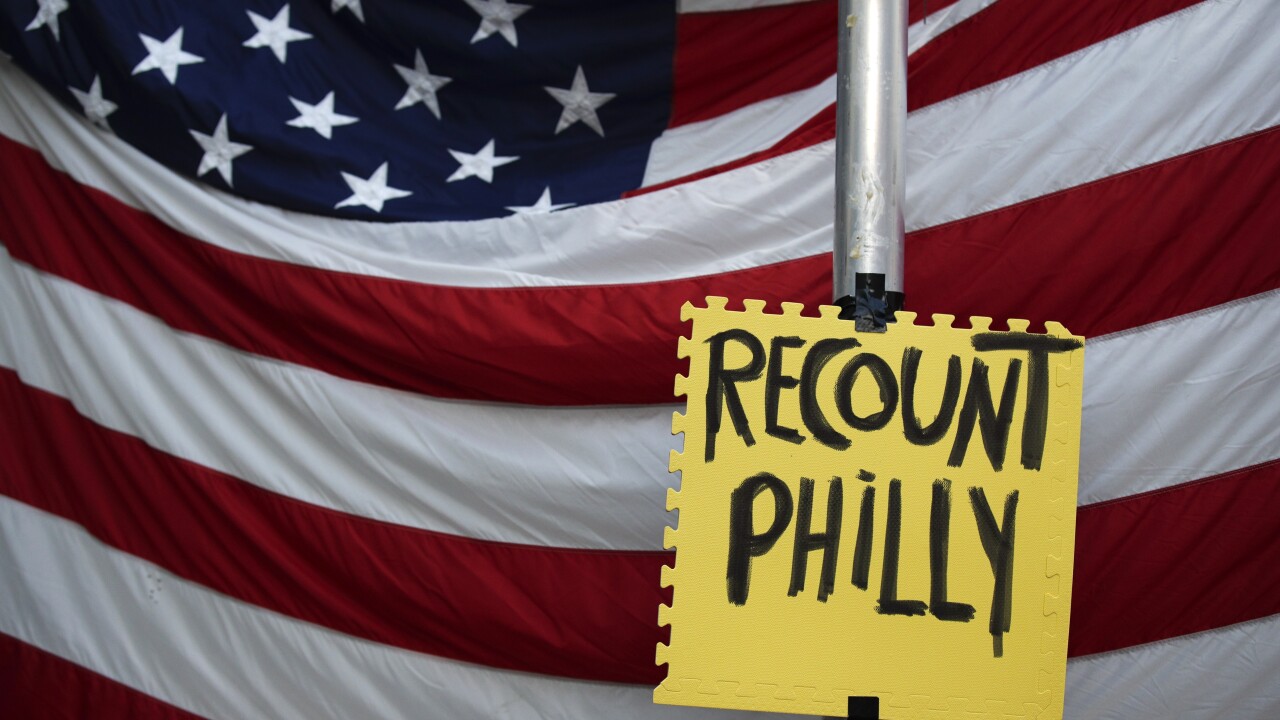 Copyright 2020 The Associated Press. All rights reserved.
Rebecca Blackwell/AP
A sign hangs in front of an American flag, as a handful of supporters of President Donald Trump continue to protest outside the Pennsylvania Convention Center, in Philadelphia, Tuesday, Nov. 10, 2020. (AP Photo/Rebecca Blackwell)

PHILADELPHIA (AP) — Loyalists of President Donald Trump have filed at least 15 legal challenges in Pennsylvania alone in an effort to reclaim the state’s 20 electoral votes.

There's action, too, on the legal front in Georgia, Arizona, Nevada and Michigan as the president insists without evidence that the election was stolen from him. Yet election officials nationwide from both parties say there's been no conspiracy.

Experts doubt the suits can reverse the outcome in a single state, let alone the election. Trump aides and allies have privately admitted as much, suggesting the challenges are designed more to stoke his base.

THE CLAIMS: Trump’s campaign has sued seeking the manual inspection of potentially thousands of in-person Election Day ballots in metropolitan Phoenix that they allege were mishandled by poll workers and resulted in some ballot selections to be disregarded. The campaign is asking the court to bar the certification of election results until such a manual inspection is completed.

Secretary of State Katie Hobbs’ office has called Trump’s lawsuit a repackaged version of a now-dismissed challenge over the use of Sharpies to complete Election Day ballots in metro Phoenix.

WHAT’S NEXT: A judge will hear arguments in the case on Thursday.
___

THE CLAIMS: Georgia’s two Republican senators have demanded the resignation of the Republican secretary of state over what they say are “too many failures in Georgia elections this year.” But their statement didn’t specify what failures they had seen beyond “mismanagement and lack of transparency.”

While the AP has not called the race, Biden leads Trump by more than 14,000 votes out of nearly 5 million votes in the state. A Democrat has not won Georgia’s Electoral College votes since 1992.

Secretary of State Brad Raffensperger rejected the demands of Sens. David Perdue and Kelly Loeffler — who face January runoffs that will decide control of the U.S. Senate — and denied there had been widespread problems. On Wednesday, he announced an audit of presidential election results that will trigger a full hand tally.

WHAT’S NEXT: The secretary of state said the process is slated to begin by the end of the week. He expects it to take until Nov. 20, which is the certification deadline.
___

The lawsuit includes assertions from poll watchers that their challenges were ignored or that they weren’t allowed close enough to the vote counting. Some say they saw apparent double-counting of some ballots. Others alleged they saw signs of political bias, including poll workers rolling their eyes when they opened ballots with votes for Trump. Several people noted in affidavits that they saw poll workers or Democratic observers wearing masks or clothing supporting Black Lives Matter, implying that they therefore opposed Trump.

There is no evidence anyone miscounted votes out of political motivation.

WHAT’S NEXT: No hearing has been scheduled in the latest case. Injunctions sought in two other lawsuits were turned down. Another case is pending.
___

THE CLAIMS: Two Trump campaign officials stood before a crowd of chanting protesters Sunday and, without evidence, claimed that there were thousands of potentially fraudulent votes, including votes cast on behalf of dead people and by people who were no longer Nevada residents.

The election security agency at the Department of Homeland Security says states have strong safeguards to detect illegal voting under the names of the deceased, including signature matching and death records. Rumors that people 120 years and older voted in the election “are actually innocuous clerical errors or the result of intended data practices,” such as someone typing “1/1/1900” into a database as a placeholder item.

The Trump campaign settled one lawsuit that was before the Nevada Supreme Court, saying it had reached an agreement with Clark County, which includes Las Vegas, to add more observers to a ballot-processing facility.

Officials in Clark County said they have forwarded two allegations of ballots being cast in the name of dead voters to the Nevada Secretary of State, which declined to comment on ongoing investigations.

WHAT’S NEXT: A lawsuit challenging the use of an optical scanning machine to count ballots and verify signatures is still pending.
___

THE CLAIMS: Trump loyalists have filed at least 15 legal challenges in Pennsylvania alone, some before Election Day arrived. Two pending cases involve a state Supreme Court decision before the election that allowed mail-in ballots to count if they were sent by Election Day and arrived up to three days later.

The state estimates there are about 10,000 mail-in ballots at stake. Biden currently leads by about 50,000 votes.

On Monday, Trump’s campaign sued to stop the certification of the election results in Pennsylvania, alleging that Republican votes were “illegally diluted by invalid ballots.” The lawsuit itself contained no evidence of voter fraud other than a smattering of allegations such as an election worker in Chester County altering “over-voted” ballots by changing votes that had been marked for Trump to another candidate.

WHAT’S NEXT: Court hearings are scheduled in at least one pending case, while filing deadlines are ahead in others. Trump has won one victory: A state court ruled his campaign observers had to be allowed closer to the actual vote counting.
___

THE CLAIMS: State Republicans are providing no evidence that any of the problems affected the overall outcome of the election.

Instead, the effort appears aimed at sowing doubt in the election results among Trump supporters ahead of a possible recount. And one Republican has raised the remote possibility of setting aside the results altogether.

The issues they have raised include clerks filling in addresses on absentee ballot envelopes and a vote-counting error in one county that was quickly corrected. The state’s top elections official, Meagan Wolfe, has said repeatedly that there were no problems with the election reported to her office and no complaints filed alleging any irregularities.

But Republican Assembly Speaker Robin Vos has ordered an investigation into the election results. Said Rep. Joe Sanfelippo, a Republican appointed to the committee overseeing the probe: “If an investigation shows these actions affected the outcome of the election, we need to either declare this past election null and void and hold a new election or require our Electoral College delegates to correct the injustice with their votes.”

Under state law, the Republican-controlled Legislature has no role in picking electors, who are bound to cast their vote for the winner of Wisconsin’s popular vote as certified by the state elections commission. The commission is chaired by a Democrat, and Democratic Gov. Tony Evers has to sign off on who the elections commission certifies as the winner.

WHAT’S NEXT: Trump is expected to request a recount as soon as possible, likely Nov. 18 under state rules.
___