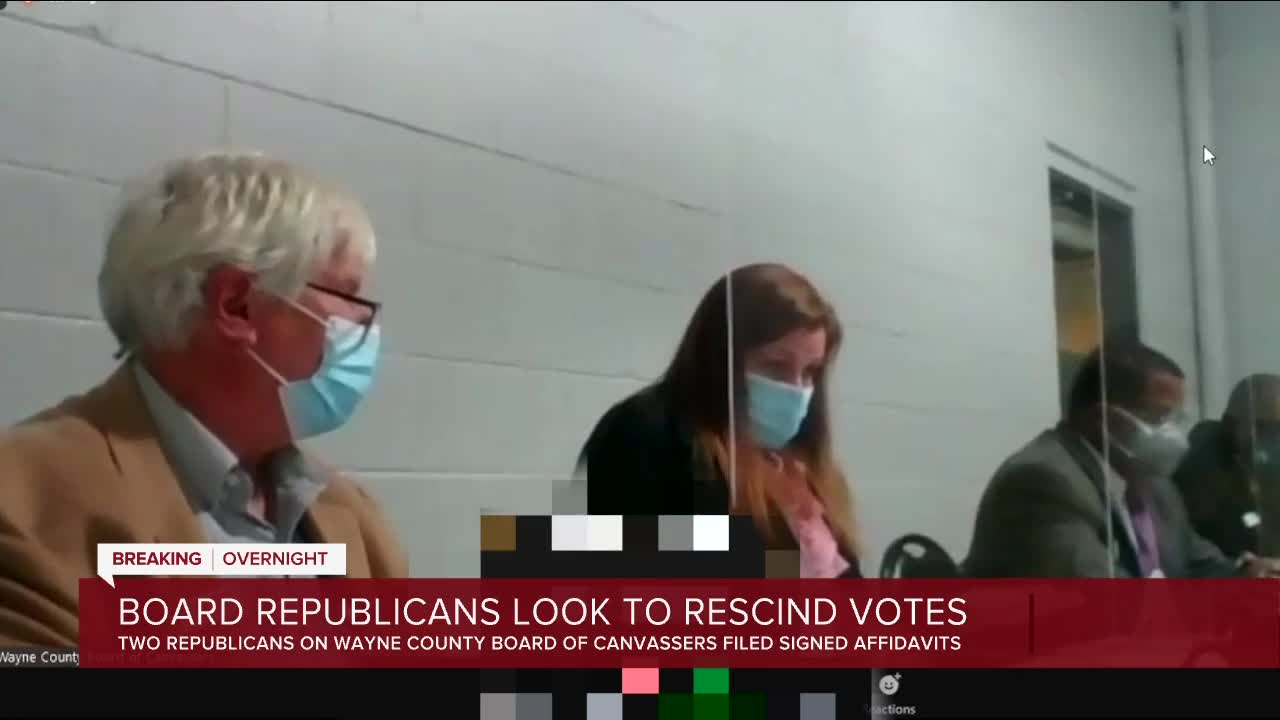 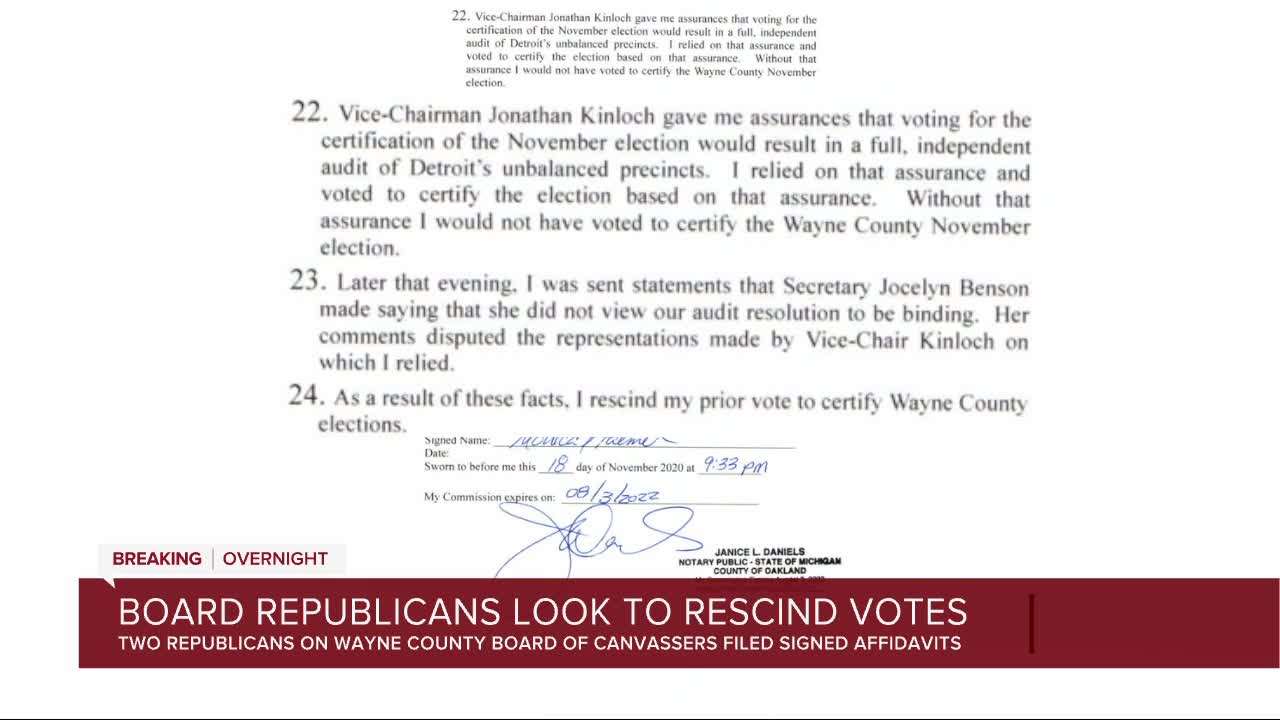 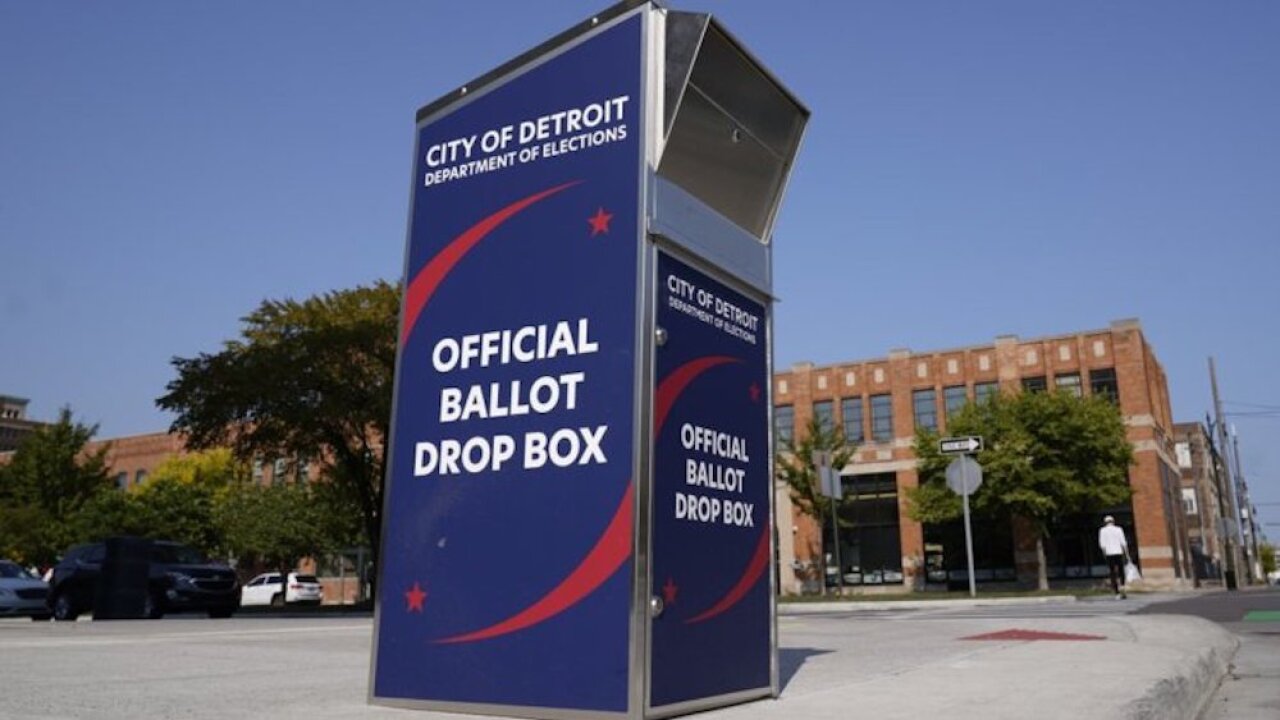 DETROIT — The Trump campaign announced Thursday it was dropping its lawsuit over the election results in Michigan. The news comes as two Republicans try to rescind their vote that certified Wayne County's election results, however there is no "legal mechanism" for them to do so.

According to a statement from Trump lawyer Rudy Giuliani, the campaign wanted to stop the Wayne County results from being prematurely certified.

“This morning we are withdrawing our lawsuit in Michigan as a direct result of achieving the relief we sought: to stop the election in Wayne County from being prematurely certified before residents can be assured that every legal vote has been counted and every illegal vote has not been counted," Giuliani said in a statement.

It is also being reported that President Donald Trump reached out to the two Republican members of the Board of Canvassers in Wayne County before they sought to rescind their votes.

The two Republican members initially voted against certification Tuesday night, then reversed course and voted for certification just ahead of the deadline. Now they are trying to rescind those votes.

"There is no legal mechanism for them to rescind their vote. Their job is done and the next step in the process is for the Board of State Canvassers to meet and certify," said a statement from Michigan's Secretary of State Jocelyn Benson.

Monica Palmer, chair of the Wayne County Board of Canvassers, and William Hartmann, one of two Republicans on the Board, filed signed affidavits Wednesday night demanding to rescind their "yes" certification votes.

"I fully believe the Wayne County vote should not be verified," Palmer said in an affidavit. "The Wayne County election had serious process flaws which deserve investigation. I continue to ask for information to assure Wayne County voters that these elections were conducted fairly and accurately."

After the two Republican members of the Wayne County Board of Canvassers initially caused a deadlock Tuesday, they eventually agreed to certify the county's vote on the condition of an audit.

The motion to hold another vote came following hours of public comments condemning Republican canvassers' decisions to vote against the certification.

"Late in the evening, I was enticed to agree to certify based on the promise that a full and independent audit would take place," Palmer wrote. "I would not have agreed to the certification but for the promise of an audit."

Both Palmer and Hartmann claim they were pressured into agreeing to certify the results after being subjected to harsh comments during a lengthy public hearing.

"This vote was followed by public derision from our two democrat colleagues. I, and Monica Palmer, who also voted against certification, were berated and ridiculed by members of the public and other Board members," Hartman state in the affidavit. "This conduct included specious claims that I was racially motivated in my decision. This public ostracism continued for hours during which time we were not provided an opportunity to break for dinner and were not advised that we could depart and resume the hearing on another date."

The first vote tied 2 to 2 along party lines. But just before 9:30 p.m. Tuesday, the Board filed a motion and voted to certify the results under the stipulation that Secretary of State Jocelyn Benson does a comprehensive audit of the election in the county.

The canvassers' initial vote came after many Detroit precincts were found to be out of balance — meaning the number of votes is not in line with the number of voters. However, the variance is said to be small, with no evidence of fraud or systemic failure.

President Donald Trump, who has continually made unsubstantiated claims about widespread voter fraud, has criticized the Board's decision to certify the election.

All 83 counties in Michigan have voted to certify the results of the Nov. 3 election, according to Michigan Secretary of State Jocelyn Benson.

The Board of State Canvassers is set to meet Monday — in a hearing that is open to the public — to certify the total number of votes cast in the November general election.

In December, all of Michigan's electors are expected to cast their votes for Joe Biden, who won the state by over 150,000 votes.

View the affidavits below:

This story was originally published by Fatima Bangura and Max White on WXYZ in Detroit.