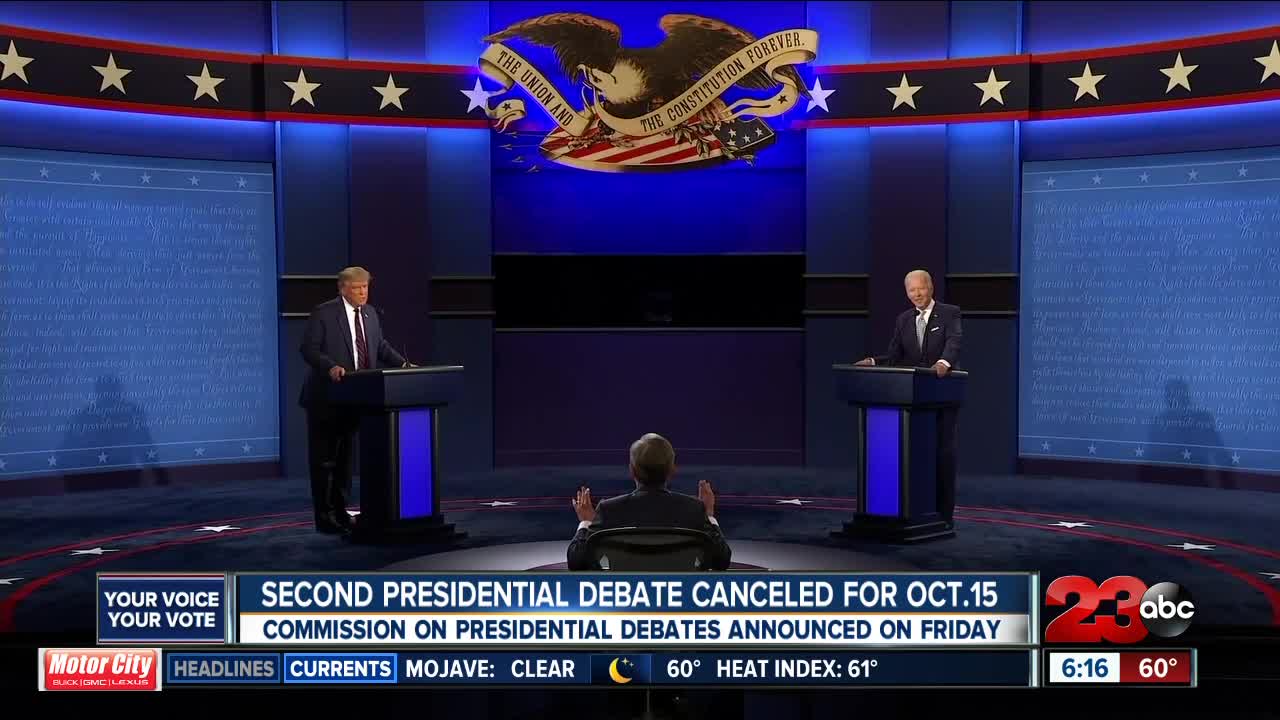 We are now just 24 days away from the presidential election and on Friday the debate commission revealed their plan to make next week's presidential debate virtual but with president trump declining and pushing for an in-person debate. The debate has now been canceled. 23ABCs Lezla Gooden spoke with political leaders in our community about how this could impact the election.

We are now just 24 days away from the presidential election and on Friday the debate commission revealed their plan to make next week's presidential debate virtual but with President Trump declining and pushing for an in-person debate, the debate has now been canceled. 23ABCs Lezla Gooden spoke with political leaders in our community about how this could impact the election.

On Friday the Commission on President Debates announced that it would be officially canceling the next scheduled debate on October 15th between President Donald Trump and Democratic presidential nominee Joe Biden. This comes after the commission initially made the call to hold the debate virtually after concerns regarding the president's COVID-19 diagnosis. The Biden campaign was open to it but President Trump said a virtual forum would be unnecessary, wanting an in-person debate.

The Kern County Republican Party weighed in on President Trump's decision and shared it is the public's right to have a debate held in person.

"This has been held live and on stage and this should be no different- the president has gone through some of the best medical care In the world and he is testing regularly. And as we saw at the VP debate the candidates couldn't have been further apart more safely- and socially distanced. I believe the American people deserve a debate on the stage," said Javier Reyes, a member of the Kern County Republican Party Central Committee.

The cancellation comes after a constant back and forth over the past 48 hours between both campaigns and the commission on what To do. And with no solution found yet the vice-presidential dent could be the last face-off for this campaign season. One local expert shared that regardless if future debates are held most individuals have decided their votes.

"Is it going to change peoples minds probably not but given how the first debate went and given how there wasn't a lot of clear messaging that was occurring because of continual interrupting if debate number two was going to be the same way- I don't know what anyone was going to learn and for those small percentage undecided I don't know if it Ould have even helped them," said Dr. Ivy Cargile, Assistant Professor of Political Science for CSUB.

The Biden campaign announced that in replace of the debate they will be hosting a town hall airing on ABC on Oct,15th allowing voters to ask questions to the former vice president. And the President of the Democratic Women of Kern, Robin Walters, said these change of events may actually work in Biden's favor.

"I think it would have been nice to get Joe Biden and Donald Trump actually had a debate about policy issues but Donald Trump wouldn't allow it like he isn't allowing this. I love the town hall format but if it can be done safely than the real loser isn't the American people it's Donald Trump."

President Trump is scheduled to host an in-person event on Saturday at the White House and is expected to speak from the balcony and will be delivering a speech in Sanford, Florida at a Make American Great event. As of Friday, both candidates have agreed to participate in the next and final presidential debate scheduled for October 22