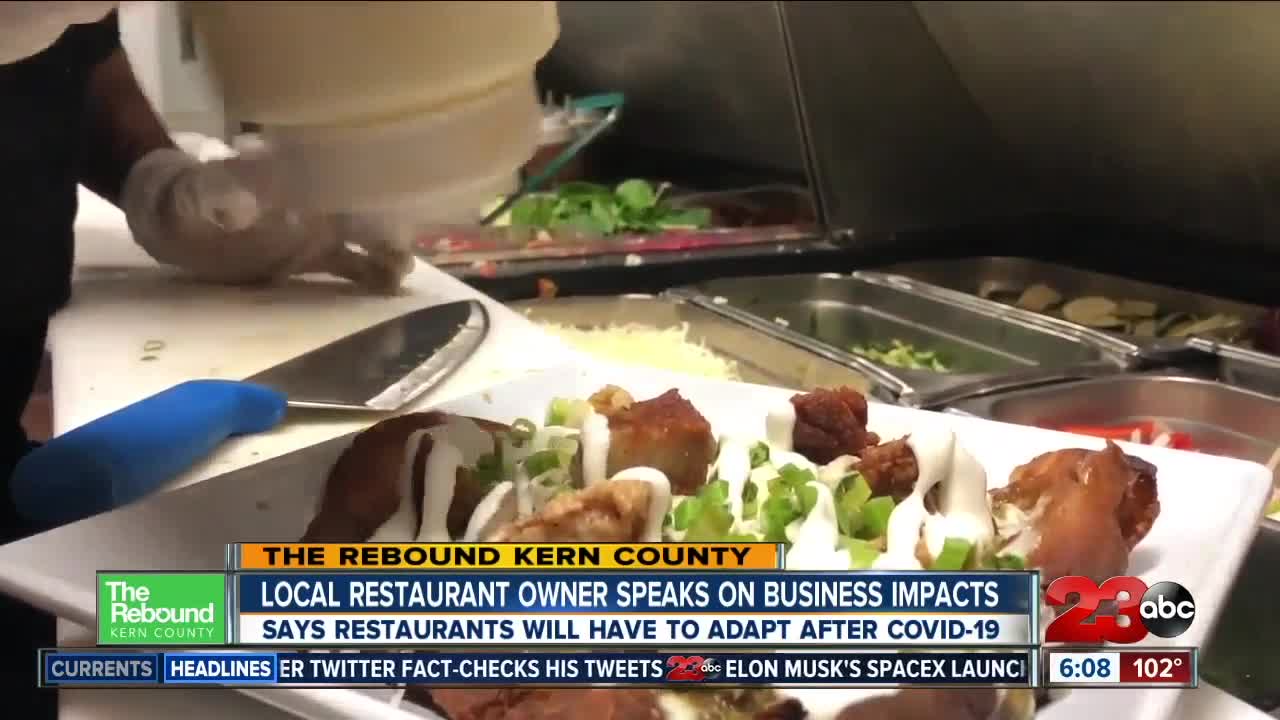 Alejandro Ocampo discusses the changes in his restaurants and how the industry will have to adapt after COVID-19.

BAKERSFIELD, Calif. — Millions of employees in the restaurant industry have been impacted by the rippling effects of COVID-19. As restaurants reopen many people running the operations have had to make numerous changes to their business. 23ABC sat down with Alejandro Ocampo, a local business owner, to discuss the changes he’s made in his restaurants, how he's keeping staff employed and the future of the restaurant industry.

Ocampo has worked in restaurants since he was 17-years-old. Now, he owns several of his own restaurants that are family owned and operated in Bakersfield. Such as Bakersfield Pizza and Vida Vegan, and Camino Real Kitchen and Tequila. Although he’s been in the restaurant industry for 12 years now, he says he thought he had been through the hardest of times, until COVID-19.

“We opened on May 10, 2008 the week that the housing market started to crash here in California. We survived the worst of economic times that I could even think of, right? Never did I fathom that COVID would be another one," said Ocampo.

He said his family has been through a crisis but didn’t foresee a pandemic, which has brought back troubling memories.

“It takes me back to when we opened Camino Real. I lost my house my brother lost his house and that’s the actuality of owning a business," said Ocampo.

The ups and down were more than financially stressful but emotionally.

“It was very very hard for us. That whole time for our family...uncertainty. Knowing the PG&E guy on a personal basis or the Sheriff’s Office when it was eviction time, you know we were there,” said Ocampo.

Ocampo said they’ve almost lost the restaurant before and they wouldn’t have made it if they didn’t have family support. However, the uncertainty surrounding COVID-19 has made him fearful of the possibility it could all happen again.

”These last two months have been very difficult for us and it is scary to think that we were... some of our businesses were on the verge of closing because we couldn’t … we weren't going to be able to make it,” said Ocampo.

“Honestly if we weren’t so smart about saving money and just putting it away for emergencies, we wouldn’t have survived the first month,” said Ocampo.

According to the National Restaurant Association, “The restaurant industry, more than any other industry in the nation, has suffered the most significant sales and job losses since the COVID-19 outbreak began.”

Ocampo said even before COVID-19 he saw the restaurant business changing because of food and labor costs increasing, and realized his own businesses had to operate in a more efficient way.

“I foresaw this happening and that was one of the main reasons that we did Bakersfield Pizza. Just because the higher labor costs, it’s making it difficult to be a full service restaurant. So, the fact that COVID is making a lot of restaurants do this, I think it’s going to be easier for a lot of big businesses to survive where labor costs keep going up. I mean next year we are going to $14 dollars an hour, labor increase means food increase so from a business perspective it makes sense to be more of the fast casual counter service," said Ocampo.

According to the National Restaurant Association, “2 out of 3 restaurant employees have lost their jobs.” Ocampo said that after COVID-19 he feels having servers may be a thing of the past.

“I think that’s the future of dining out. Is not having the servers. You know five ten years from now who knows if we’re going to have full service," said Ocampo.

He also thinks that table service restaurants may also be gone too.

“Ultimately, I foresee it more fast casual, Chipotle style service where the food gets expedited to your table.”

In a recent national survey conducted by the National Restaurant Association, they found that over “8 million restaurant employees have already been laid off or furloughed since the beginning of the coronavirus outbreak.”

Before COVID all of Ocampo’s restaurants combined staffed about 100 employees but during the pandemic his staff dropped to about 30. Now, that his restaurants are reopening, he says they’ve made every effort to keep as many staff members employed. Even though it meant some changes.

For right now he will be able to employ a total of 70 employees.

He said when Camino Real reopens they will be taking a mixed approach to serving customers. Which will include curbside, counter service and for now full table service, as they can sustain it. Ocampo said he does see the restaurant going to full counter service sometime in the future.

Next week will be the first time in nearly two months that the restaurant staff is all coming together. He realizes the safety of his staff and customers is in his hands. When it comes to wearing masks in his restaurants staff will be required to wear them but customers will have a choice.

“Ultimately if the community or the world as a whole does the right thing you know... if you are feeling sick stay home, self-quarantine … think about others, think about the people around you. A lot of us and me personally I have kids I want to go home to and...that worries me," said Ocampo.

Masks won't be the only change at the restaurant. He's also awaiting approval for more seating on the sidewalks. Customers will also be able to browse their menu on their phones by scanning a code that's on the table.

“So, you can just scan it and on your phone, you can scan through the menu options. our happy hour menu our dessert menu and we will have some printed menus as well if people don’t know how to use the QR,” said Ocampo.

But that’s not the only changes coming to the menu. There will also be some price adjustments.

“The menu does reflect some price changes. We had to take menu items out that we could no longer carry just due to them being too expensive,” said Ocampo.

He says without the community supporting them during this time they wouldn’t have made it.

“A lot of our success is our community. We are hoping that a lot of these small local restaurants and a lot of the community can continue to supporting us through these difficult times," said Ocampo.

He said the future depends on listening and valuing the customer's needs in order to create an enjoyable environment because the future of the industry will continue to change.

“If anything, COVID has given us a foresight to the future of what dining might be. I mean maybe ten years from now people aren’t going to go out to eat. Maybe it’s going to be drones,” said Ocampo.