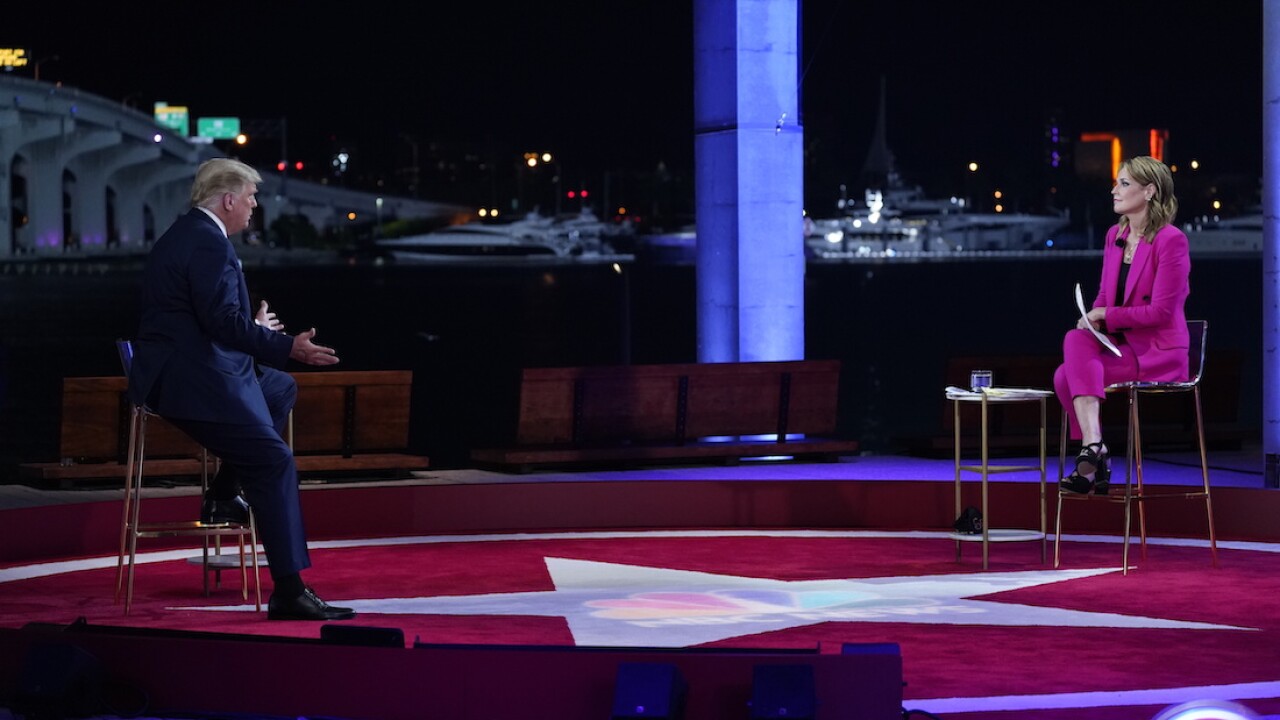 President Donald Trump is at the Pérez Art Museum in Miami on Thursday night for a town hall moderated by Today host Savannah Guthrie as he took questions from voters as part of a town hall.

Trump was evasive with Guthrie about whether or not he took a COVID-19 test on the day of his debate against Democratic presidential nominee Joe Biden.

Guthrie asked Trump when his last test was; he told her he tests quite a bit. Guthrie then asked if he tested the day of the debate, and Trump said he probably did.

Trump did inform Guthrie that he has no remaining symptoms of the virus. He did add that his doctors told him that his lungs were "a little bit infected" when he was hospitalized.

Trump also claimed that the CDC found that "85% of the people that wear masks catch it." Guthrie responded that she knew of that study, and that's not what it says. Trump responded that is what he heard.

The CDC study that Trump referred to didn't even state a percentage of who doesn't wear masks. Trump also added the US is "expected to lose 2,200,000 people and maybe more than that" from coronavirus. Trump was likely referring to this report from March by scholars that predicted that a total of 2.2 million Americans could die from COVID-19 if no preventative measures were placed.

Trump denounced white supremacy during a town hall on Thursday while on NBC.

During his town hall on NBC, Trump refused to denounce the QAnon conspiracy theory, telling Guthrie that he knows "nothing about QAnon."

The conspiracy Guthrie referred to during Thursday's town hall was that the Democrats run a satanic pedophile ring, and Trump is its savior. Guthrie then asked Trump if he could state that it was not valid.

Trump said that all he knew about the conspiracy theory is that "they are very much against pedophilia" and agree with that.

Guthrie also asked Trump about a tweet he recently retweeted about the conspiracy that former president Barack Obama and Biden "had SEAL Team 6 killed" and that Osama bin Laden's death was a hoax.

"I know nothing about it," Trump said. "That was a retweet — that was an opinion of somebody. And that was a retweet. I'll put it out there. People can decide for themselves." "I don't get that," Guthrie responded. "You're the President. You're not like someone's crazy uncle who can retweet whatever."

During his hour-long town hall, Trump confirmed that he might owe $400 million personally but did not state to whom he owes the debt. He added that he didn't owe any money to Russia or to "sinister people."" $400 million is a peanut," Trump said during his town hall.

Trump added that he is currently being audited and that the IRS mistreats him."