Local officials sound off on Prop 13, which aims to modernize California public schools 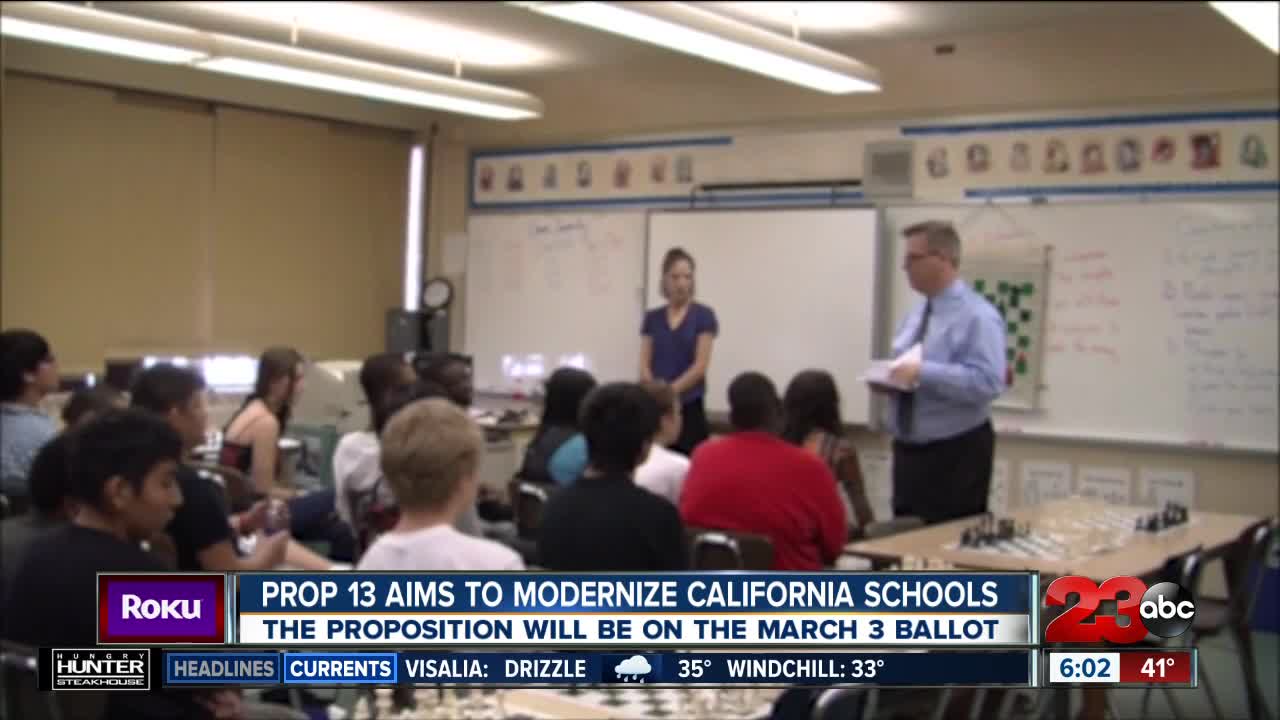 BAKERSFIELD, Calif. — Next month, California voters will decide on Prop 13, which aims to provide billions of dollars worth of structural upgrades to public schools. The prop will be on the March 3rd ballot.

Supporters of prop 13 say it will improve facility health and safety conditions, including earthquake and fire safety among other things. Some campuses haven't been upgraded in decades, and officials say the situation is dire.

"I had circumstances for example like a student who wore an insulin pump and his insulin would go bad because it was so hot in my classrooms," said Julie Boesch, the Superintendent of the Maple School District, which oversees Maple School in Shafter.

Maple School's buildings, built in 1961, had never been renovated.

"We had a non-operational fire alarm system, water intrusion in all of our buildings except for our first-grade classroom, we had dry-rot throughout most of our roofing system, Boesch said.

Dealing with a broken campus was hard, but securing funds to fix things was even harder. Boesch said it took four years worth of advocacy and work from local legislators to approve $11 million for a complete rebuild, which is expected to finish in March. Although she's thrilled about it, she said the funds will still only cover the bare minimum.

"Parking lot, parent pick up and drop off, bus parking, any play fields, that's not part of the project," she said.

Boesch said her school received less than half the funds it usually takes to rebuild a school. Prop 13 would authorize up to 15 billion dollars in bonds aimed at modernizing public campuses, removing lead from water, and increasing affordable housing for students.

However, some are concerned about the language used in the proposition. The Kern County Taxpayers Association says passage of the prop will increase local school districts' borrowing capacity by 60 percent.

"So that means you'll be seeing more and more school bond elections. Ultimately for the local taxpayers, their tax bills on schools could go up 60 percent," said Michael Turnipseed, Executive Director of the association.

Turnipseed also said the prop gives priority to schools that have union labor agreements for construction.

"But most small, poor districts don't have project labor agreements," he said.

But the prop is gathering support from the LA Times and San Francisco Chronicle because they say it focuses on buildings and classrooms that are suffering from years of neglect and makes it a priority for low-income school districts to get a share of the money.

Boesch is confident that Prop 13's passage would be good for her small school.

"One of the goals of the proposition is to put mechanisms in place so small districts have more equitable access to funding," she said.

To see the full text of Proposition 13, see here: