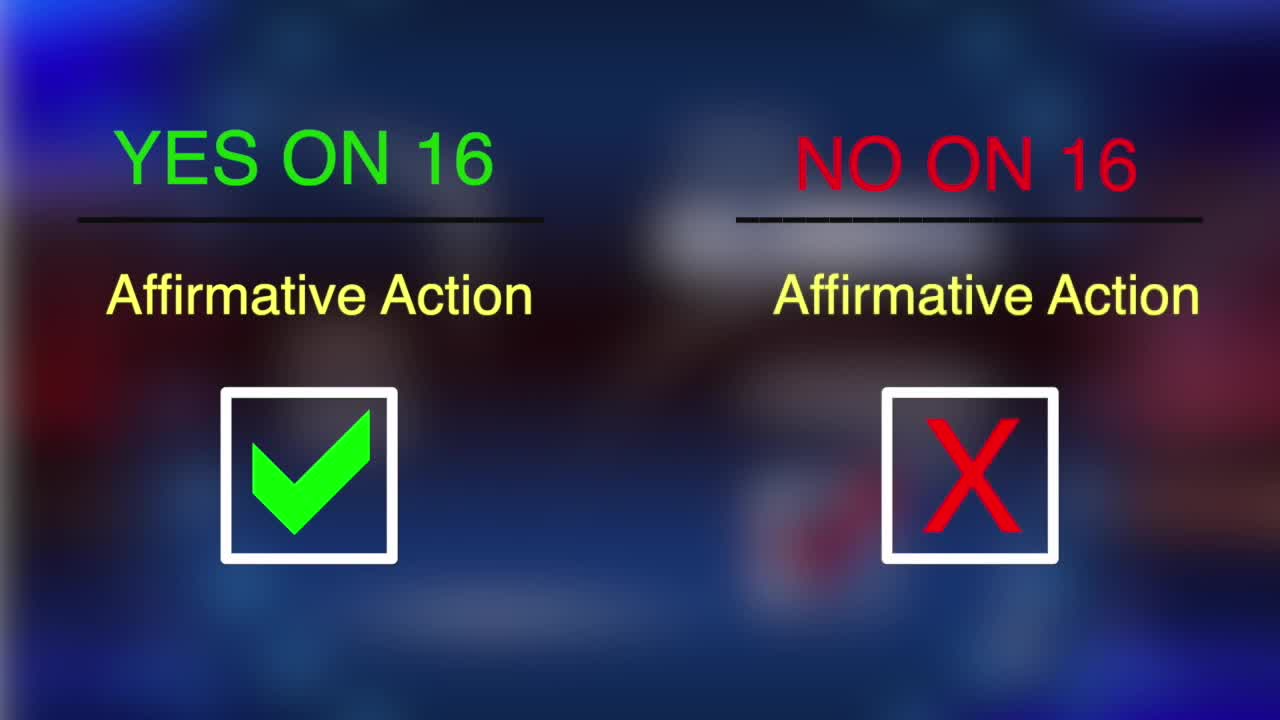 There are a dozen propositions on California's November ballot this election year and one of them is aiming to bring affirmative action back to the state. 23ABC's Bayan Wang spoke with experts on both sides so that your vote is a confident one.

There are a dozen propositions on California's November ballot this election year and one of them is aiming to bring affirmative action back to the state. 23ABC's Bayan Wang spoke with experts on both sides so that your vote is a confident one.

The central question behind Proposition 16 is whether California should consider race, ethnicity, or gender when deciding on state contracts, who is hired for a public job, and which student is admitted into public colleges and universities.

The inception of Proposition 16 comes more than two decades after California became the first state to ban affirmative action by passing Prop 209. This happened in 1996 when Prop 209 added Section 31 to the California constitution which read: "The state shall not discriminate against, or grant preferential treatment to any individual or group on the basis of race, sex, color, ethnicity, or national origin in the operation of public employment, public education, or public contracting."

"There are a lot of benefits that can accrue to all of us of all races and all genders."

Thomas Saenz is the president of the Mexican American Legal Defense and Educational Fund. He is a key co-chair for the "Yes on Prop 16" campaign. He said reintroducing affirmative action to the state will help address racial and gender disparities in state contracting, public jobs, and competitive public colleges.

"This really only applies to competitive admissions and that means we have lots of folks who are qualified, ready to participate in the program, but because we don't have enough seats, we engage in selective admissions and that's the only area where there would be the kind of rigorous and careful consideration on whether we can look at affirmative action to address the disparities in admission to the program that we continue to see."

Saenz pointed out that "Yes" on Prop 16 doesn't mean universities will implement racial quotas, which was ruled impermissible in a United States Supreme Court ruling in 1978. Instead, he believes it may allow universities to be more conscious about their racial and gender makeup within the limits of federal law.

"Proposition 16 with a yes vote, will bring us all to an opportunity for all state in California," added Saenz.

Gail Heriot thinks otherwise. She's a law professor at the University of San Diego, who was a key co-chair of the Prop 209 campaign. Heriot believes an opportunity for all is the last thing a "Yes" vote on Prop 16 would achieve.

"If there really were institutionally racism, the last thing in the world you would want to do is authorize the University of California to use its discretion about whether or not to discriminate on the basis of race."

Heriot says when Prop 209 passed universities started to pay more attention to disadvantaged students who come from low-income families or whose parents may not have had a college education, giving them a little leg up during the admissions process.

"I don't want to throw all that away and go back to the system where race meant that each student was going to be judged not really on their individual achievements, but on their individual achievements as a member of their race, different standards for each race and that's what it was. If you were Asian, you had to have hundreds of SAT points higher than if you were African-American."

Again, a "Yes" vote on Prop 16 would allow for the development of affirmative action programs that would allow race, ethnicity, gender, and national origin to be considered in public education, public employment, and public contracting, within the limits of federal law. A "No" vote will keep affirmative action banned from the state.